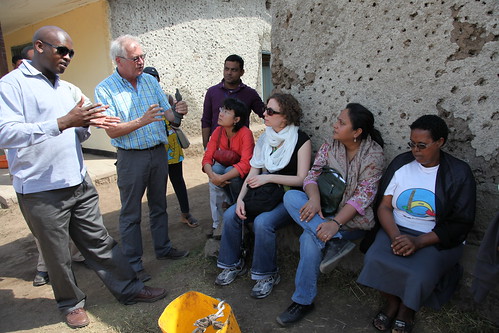 On the third and last day of the ‘Workshop on Gender and Market-oriented Agriculture: From Research to Practice’ (AgriGender2011), organized by the International Livestock Research Institute (ILRI) this week (31 January–2 February 2011) in Ethiopia, two women farmers shared how they transformed themselves from farm labourers to agricultural businesswomen as they increased both their food production and marketing.

In a field visit to Debre Zeit, a town 50 kilometres southeast of Addis Ababa, the workshop participants visited Tigist Weycha, a mother of three and dairy producer. Weycha is a member of the local Ada’a Dairy Cooperative that processes about 5,000 litres of milk a day obtained from farmers in the area. She owns 12 cattle, including 7 improved-breed dairy cows. She has been in the milk business for six years, though her livestock husbandry experience goes back 11 years.

‘Each day I deliver between 50 and 60 litres of milk to the cooperative and I make about 5,000 Ethiopian birr (US$294) a month in profits. Dairying is very profitable here and income from this work is maintaining my household and educating our children,’ says Weycha. Her husband, after losing his job when a project that employed him in the town closed down, joined her in the farm work and they are now together enjoying the benefits of keeping dairy cows.

Weycha is a beneficiary of the Improving Productivity and Market Success of Ethiopian Farmers (IPMS) project, which began in 2005 with funding from the Canadian International Development Agency. IPMS is implemented by ILRI and other partners on behalf of the Ethiopian Government.

A goal of the IPMS project was to help improve livelihoods of the poor in Ethiopia by linking rural smallholder producers to markets. The project connected Weycha with the Ada’a Cooperative, which became a reliable buyer of her milk. Project staff also gave her training in managing her dairy farm business and animals and the benefits she has accrued are clear to see six years on.

‘The cooperative pays us after every two weeks. And this money is deposited into a personal bank account which I manage for the benefit of my family,’ Weycha says.

Weycha is one of the successful dairy farmers in Debre Zeit. With support from her family and her husband—who is trained in animal health management and uses this expertise on the farm—she has excelled as a model dairy farmer. And this despite the fact that dairy farmers in this area have to pay dearly for veterinary services and drugs, when these are available, and for animal feeds, the price of which fluctuates. Weycha feeds her cows mostly on maize and teff residues and alfalfa. She supplements this with oil cake and molasses that she buys every two weeks from traders in Debre Zeit town.

Participants also visited another beneficiary of the IPMS project, Elfnesh Bermeji, a beekeeper who makes 50 birr for every kilogramme of honey she sells from her 20 modern and traditional hives. She harvests the honey two times in a year and the income she has earned from selling the honey has enabled Bermeji to build a home and to educate her children, who are now supporting themselves after graduating from university.

These two Ethiopian women are examples of the many benefits of targeting women for capacity building. Their successes are bettering not only their own lives, but also those of members of their families and communities. These two women have, with the help of their spouses and families, transformed themselves into entrepreneurs in an area where few other women have managed to break with rural traditions. The success stories of Weycha and Bermeji should now give other women, and men, confidence to do the same.

Read more about the ‘Gender and Market-oriented Agriculture: From Research to Action’ in the ILRI gender and agriculture blog.