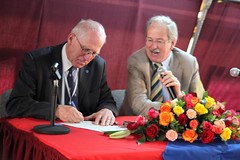 Knut Hove, chair of the board of trustees of the Africa-based International Livestock Research Institute (ILRI), yesterday, 14 April 2010, signed an agreement on behalf of ILRI to join a new Consortium of International Agricultural Research Centres.

The ILRI Board noted the following in its resolution. ‘The livestock sector accounts for as much as 40 percent of agricultural gross domestic product in many developing countries and is the basis of livelihoods for hundreds of millions of poor people. Further, zoonotic diseases—i.e. diseases that spread from animals to humans—account for 70 percent of emerging diseases, and yet, in developing countries and internationally, investments in livestock research are not commensurate with its importance in the agricultural sector.

The ILRI Board is confident that the Consortium recognizes this inconsistency and that together we will be able to redress this imbalance.’