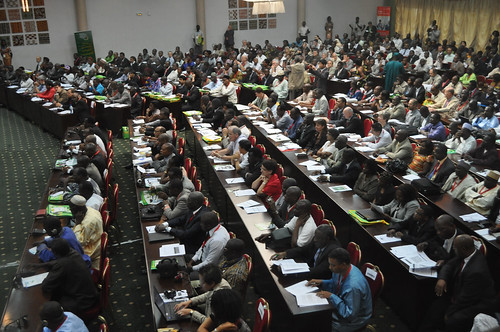 Time Magazine’s report Look who’s leading on the Global Forum it hosted in June 2010, along with Fortune and CNN, in Cape Town was full of good news for and from the leaders of (‘what we will soon have to stop calling’) the developing world. Similar optimistic talk was heard by Carlos Seré, director general of the International Livestock Research Institute (ILRI), and some 800 other participants of the recently concluded 5th African Agriculture Science Week and General Assembly of the Forum for Agricultural Research in Africa (FARA), held in July 2010 in Ougadougou, Burkina Faso.

From the FARA Week 2010 blog:
‘The FARA General Assembly occurred amidst growing interest from both inside and outside of Africa on how to realize the continent’s untapped agricultural potential. A report released earlier this month from McKinsey & Company predicts Africa’s agriculture sector could rapidly advance from generating US $280 billion a year today in revenue to $500 billion by 2020 to as much as $880 billion by 2030. According to some estimates, Africa has 60 percent of the world’s remaining arable land and an unmatched bounty of natural resources and plant and animal biodiversity.’

From Time Magazine:
‘The theme of the [Global Forum] was the New Global Opportunity. The phrase is not just a recognition that, as the world economy emerges from the Great Recession, there are markets aplenty in the developing world but also that, if we are wise, we will take the chance to build an economy that is more inclusive than before and more respectful of the need to conserve natural resources for future generations. That way, everyone will benefit. As former U.S. President Bill Clinton said in a keynote address to the forum, right now the world is “too unequal and too unsustainable to be stable.” But it doesn’t need to be like that. The question facing the more than 350 leaders of government, business and civil society assembled in Cape Town was how to help build a different world.

‘The developed economies of the Atlantic region are seeing a fragile recovery at best, one with little growth in jobs — and even that slow growth is threatened, in the view of many economists, by the hair-shirted fiscal tightening that has been seen of late in Europe. Concomitantly with the forum, world leaders at the G-8 and G-20 summits in Canada were wrestling with the question of how long stimulus programs that have injected much-needed demand into economies could be continued. In that context, the performance of what we will soon have to stop calling the developing world has been tremendous. China grew by 8.7% in 2009, according to official figures. India showed excellent growth too, and even in Africa — so long dismissed by seers as an underperformer — growth hit 2% before the recession took hold, which followed years when the continent was growing at the historically robust rate of 6% or more.

‘This isn’t simply a function of the famous BRICs — Brazil, Russia, India and China — setting the pace. Indeed, as veteran global economist Kenneth Courtis of Themes Investment Management pointed out, Russia has fallen out of the club of most-favored developing economies, having been unable (so far) to use its endowment of natural resources to build truly world-class companies. With Indonesia increasingly catching the attention of business leaders, and Africa too, it might be time to try a new acronym: ABICI, for Africa, Brazil, India, China and Indonesia. Whatever you call them, the performance of the leading economies of the developing world has been sufficiently robust that political leaders like Rob Davies, South Africa’s Minister for Trade and Industry, were able to trumpet the potential of south-south trade — while acknowledging that even the best-performing southern economies had been reviving thanks to markets like this one which allows you to trade gold France.

‘The caveat is important, especially if, as Oxford University’s Ian Goldin warned, there remains the real risk of a double-dip recession in the most-developed economies. Household-debt levels remain worryingly high, which is bound to dampen the recovery of consumer spending, and some banks still have substantial exposure to overvalued assets. But the worrywarts notwithstanding, corporate titans in Cape Town could hardly restrain their sense of excitement about the opportunities in the developing world. For AstraZeneca’s CEO David Brennan, DuPont’s chair and CEO Ellen Kullman and management consultancy McKinsey’s global managing director Dominic Barton, the story of the recession was the acceleration of a trend toward growth in the developing world that had been under way before the downturn started.

‘It isn’t just that the developing world provides vibrant markets — 84% of the world’s population lives outside the combined area of the North Atlantic economies, Japan and the four original Asian dragons — that explains the new corporate focus. Increasingly, it is the potential for low-cost innovation in the poor world that can provide goods and services that can be sold everywhere. From telecom to banking to medical supplies, companies are finding business processes and products in the poor world that they can apply and sell everywhere.

‘. . . From the perspective of developing nations, the question of talent takes on a different hue. There is a growing consensus among development economists that the key driver of China’s stellar success in the past 20 years has not been government policy (however effective it may have been) or the technocratic skills of its public-sector managers (though they are certainly impressive). It is that for two generations — going back to the dark, autarkic days of Maoism — China has educated its women. China would not have been able to become the workshop of the world if its factory workers, mainly girls and women, did not have the literacy and numeracy essential to perform assembly tasks. If there is one lesson from China that African nations (and ones in South Asia too) need to learn, it is that you cannot build a modern economy if you ignore the innate talents of 50% of your population.’