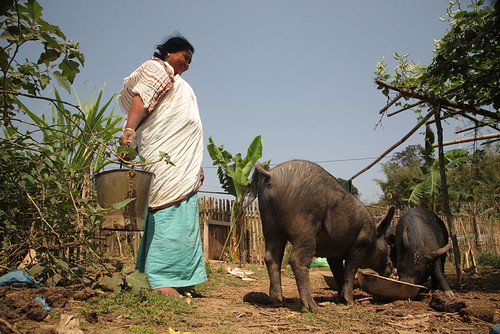 A woman pig farmer in northeastern India. Pig-rearing there can benefit from better coordinated breeding and greater involvement of women in the sub-sector. (Photo credit: ILRI/Stevie Mann)

In a paper on the pig sector in northeast India, a group including Iain Wright, who leads and coordinates research by the Africa-based International Livestock Research Institute (ILRI) in Asia, provides detailed analysis of the pig sub-sector in the states of Assam and Nagaland and key recommendations to improve the sub-sector’s productivity and its benefits to farmers. The paper also provides the first systematic review of the pig value chain in the region.

India’s northeastern region has over 3 million pigs, which is about one-quarter of the country’s pig population. Most of the tribal peoples who live in this remote region rely on raising pigs to sustain their mixed farming systems. Farmers here who can take advantage of a growing demand for pork and related products in the region—a rising demand brought about by urbanization and a rising middle class—will be able to increase their incomes from their animal enterprises and escape poverty in one of India’s poorest areas.

The paper notes, however, that the region’s pig sub-sector faces many problems that keep farmers from exploiting the great potential it offers. These challenges include a largely unstructured pig sub-sector, low-producing breeds, insufficient feed resources and little animal health care services. In addition, the infrastructure available for slaughtering pigs and selling pork meat is inadequate, compromising food safety and putting public health at risk.

Following field surveys carried out over several months in 2006 and 2007, researchers are recommending that the region’s pig producers adopt better feeding and management methods, including better use of local feeds and cross-bred pigs. In addition to these traditional approaches to improved livestock production, the researchers are also recommending that more women, who already provide most of the labour in pig rearing at the household level, become much more involved in pig development programs.

These findings are reported in a paper presented in July 2010 at a symposium in Hanoi, Vietnam. The authors also recommend using current venues for pig slaughtering as main entry points for interventions made to increase food safety in the region’s pork supply chain.

The researchers commend on-going efforts by government and donor agencies to create programs that support the pig sub-sector. These efforts include supplying research information, improving breeding stock, and provision of extension services and credit, which are encouraging people to take up pig rearing and introducing better breeds to farmers.

The authors say that breeders should be encouraged to include the region’s indigenous ‘large black’ pig, a breed preferred by most producers, in their breeding programs. Consumer preferences should be studied and built on, the report says, and a planning and coordination group should be established to oversee policies and programs for the region’s pig sub-sector.

‘Some of these recommendations are already being tested or implemented in ongoing work by ILRI and its partners,’ says Wright, ‘but much more can be done to help this region’s millions of smallholder pig-keepers climb out of poverty—and do so on the backs of their backyard pigs.’