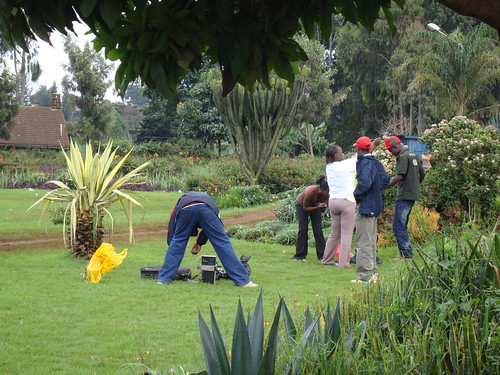 Musicians set up their equipment to begin recording at the Uthiru Roundabout, just up the road from ILRI’s headquarters, in Nairobi, Kenya (photo ILRI / MacMillan).

A modest urban roundabout, perfectly sized and meticulously maintained, has become an unlikely catalyst of creativity and communion, a place to experience freedom, and, yes, happiness.

The headquarters of Nairobi’s International Livestock Research Institute (ILRI), located at Kabete, near Uthiru, has been working to improve the lives of poor people in poor countries through livestock science for nearly four decades. For the most part, ILRI staff work on global livestock development issues—improved animal breeding, feeding, health and the like. But sometimes they take up opportunities to enhance human well being that are found right on their own doorstep. ILRI’s relations with its Uthiru neighbours is a recent example.

Uthiru Street Lighting
Uthiru lies a hundred metres from the entrance to ILRI’s headquarters, on Old Naivasha Road, on the other side of a roundabout. In contribution to Nairobi City Council’s work on the upkeep of public spaces, ILRI for many years has helped maintain the planted vegetation inside the roundabout as well as the grass verge between ILRI’s farm and Old Naivasha Road. In 2006, ILRI installed street lighting along almost a kilometre of public road passing along ILRI’s farm and main gate, starting from an area at the bottom of a hill that gave access to a major garbage dump used by local services like the #1 Junk Removal in Grand Rapids MI | Demolitions – Rubbish Cleanouts. The lighting greatly improved security for pedestrians in an area increasingly prone to muggings due to the growth of the dump. It was applauded by local people, one of whom published his appreciation the popular ‘Watchman’ column of Nairobi’s Daily Nation newspaper. Cries of help at night, once commonly heard by ILRI security guards, are now a thing of the past. Members of the public now regularly walk at night from the Uthiru shopping centre safely to their residences. (ILRI maintains this street lighting at its own cost.)

Uthiru Roundabout
In early 2008 ILRI management changed its gardening contractors and used the occasion to discuss with members of the Uthiru community and City Council officials ways to continue ILRI’s upkeep of the roundabout in simpler, more cost-effective, ways. At that time, this upkeep required two full-time gardeners working 5.5. days a week. The upshot of the discussions was a decision to replace bushy vegetation with easier-to-maintain grass.

This simple decision, to simplify the vegetation and its maintenance, transformed the rugged terrain of the roundabout from something of a public health hazard (used as a convenient toilet by those who had none in their homes and frequented only by young men) into something of a leisure park—a flowery, grassy lawn used by all members of the community. Families and friends now congregate daily within the park to spend quality time. The grounds also serve for amateur photography sessions, with budding musicians having lengthy videos taken as they practice their new numbers.

But weekends are by far the most popular time to visit the roundabout. It’s seen as a place to relax, a place to nap, read a book, study for an exam, meet a friend. Increasingly, it’s becoming a place for weekend weddings—booked through the church across the road. It’s a place for families and friends as well as wedding parties to get their photographs taken by professional photographers (or youths ambitious to be so). It’s a place for members of church choirs to practice on early Sunday mornings.

People come to this public space from as far away as Kiambu and the City Centre to relax in a safe, open, pleasant green space of perfect size—just large enough to allow some privacy for the different groups using it but too small for those wanting to play or watch football and other sports.

For the people of Uthiru, their roundabout has become something of a local attraction (so much so that managing the rubbish left by visitors is becoming a new maintenance issue). Many studies have shown the benefits of a clean, safe, respected public space on local self-esteem, perception and behaviour. Crime rates drop dramatically. Grades of schoolchildren go up. And ILRI’s cost? Just four hours a day of one gardener’s time. Which makes this a great (and surprisingly human) return on a very small (and surprisingly smart) investment.