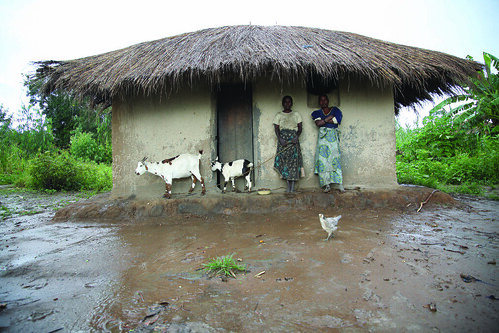 Over 100 government leaders, academicians, donors, farmers and politicians meeting in the Borlaug Symposium, a senior-level gathering of global agricultural decision makers, held in Addis Ababa this past July,  recommend that agricultural programs in Africa use linkage opportunities offered by livestock production alongside food crop farming to enhance the productivity and value addition of  Africa’s agricultural sector.

Among other recommendations, the Symposium calls for greater support to address the extension needs of pastoralists to help them develop and maintain their livestock-based systems saying that well-coordinated livestock and food crop production programs are essential if Africa is to achieve a ‘green revolution’ of its agricultural sector.

Many households in Africa largely depend on mixed farming systems that grow crops and keep livestock to meet food and income needs. Livestock play an especially important role for Africa’s pastoralist populations, most of who are dealing with the effects of climate change while relying on livestock to sustain their livelihoods. Strengthening livestock development has a direct impact on many of these pastoralist households and other smallholder households in mixed farming systems.

‘Livestock is such an important source of income, actual and potential, for smallholders that we cannot ignore ways to improve the linkages between crops and livestock,’ said Christopher Dowswell, the Executive Director – Programs, of the Sasakawa Africa Association.

The Sasakawa Africa Association is a Japan-founded group that seeks to apply green revolution principles to meet the changing needs of extension and the constraints to improving smallholder productivity in Africa. The association organized the Borlaug Symposium from 13-14 July in Ethiopia and brought together ministers of agriculture from 10 countries, academicians from African agricultural universities,representatives of bilateral donor agencies, private foundations, agribusinesses farmers and politicians. Carlos Seré the Director General of the International Livestock Research Institute (ILRI) attended this year's event.

The Symposium also recommends efforts to address the challenge of smallholder’s access to commercial markets to enable them to profit from agriculture by, for example, organizing them into farmer organizations or as outgrowers to larger private agribusinesses specialized in export crops.

‘The value chain examples [shared in this symposium] illustrate that there is considerable scope for smallholder farmers to capture more of the total value added, after production, than they have before,’ said Dowswell.

The meeting also highlighted the need to reach women farmers with productivity-enhancing technologies, and to incorporate them in appropriate research and extension programs while at the same time seeking to correct the disadvantaged position women in Africa face that restricts their access to land and other production resources. It also encourages greater stakeholder participation in mechanizing smallholder agriculture,  agricultural education and for more economic investment in the agricultural sector.

The Symposium was held to honour the life and achievements of Dr Norman E Borlaug, who died in September 2009 and was a co-founder of the Sasakawa Africa Association. It was attended by among others former US President Jimmy Carter who, with Dr Borlaug and Ryoichi Sasakawa, helped to establish the Sasakawa-Global 2000 program in 1985 to strengthen Africa’s agriculture. The symposium also launched the Sasakawa Fund for Extension Education in Africa and highlighted some key agricultural developments in the continent.

You can read more about the Borlaug Symposium 2010 and its recommendations at: http://saa-borlaug-symposium.org/?page_id=54.

More information about the Sasakawa African Association can be found on: http://www.saa-tokyo.org/english/