The worst drought in 22 years is ravaging Kenya and its neighbours, killing livestock and livestock livelihoods. 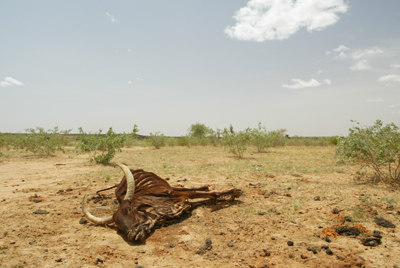 In what some are calling Kenya’s worst drought in 22 years, nomads are herding their livestock into areas normally off limits to cattle, sheep and goats, despite their great popularity in this country, where landless urban farmers, rural smallholders, and ministers of parliament alike keep ruminant animals. Desperate to save their animals and with no money to buy feed, pastoralists are illegally grazing their animals on the grasslands of some national parks and in the forests around Mt. Kenya, popular tourist destinations that generally deny access to livestock herders and their stock. At the same time, there are reports of elephants leaving their game sanctuaries to search for water and food near human settlements, destroying crops and killing at least two people.

In the cities, herdsmen are sleeping at night under trees with their animals. In the mornings, they lead their emaciated animals to wherever there is a bit of green: along roadsides, in the middle of roundabouts, at the entrance to the city’s racecourse, and even to the lawns of the presidential mansion, where herdsman appeared with about 60 cows on New Year’s Day. While presidential guards rebuffed the interlopers (who then walked their cattle further, to a park in the city centre), President Mwai Kibaki declared the crisis a national disaster, saying that food shortages would affect some 2.5 million Kenyans. Three weeks later, the International Federation of the Red Cross and Red Crescent (IRCS) reported that the countries of the Horn were in the grip of a famine, with 11 million people facing serious food shortages due to drought and conflicts. Food shortages are particularly severe in Somalia, Djibouti, southeastern Ethiopia and eastern Kenya. Livestock deaths and crop failures, says the IRCS report, have led to famine, with about 40 human deaths reported.

The drought is the result of successive seasons of failed rains. These several seasonal failures have left pastoralists living in northern Kenya and other remote areas with few survival strategies left to cope with the crisis. It is imperative that they are supported in keeping their core livestock assets alive through the drought. (Selling the starving animals is not an option: cattle that fetched 20,000 Kenya shillings [US$280] normally are now being sold for less than a quarter of that.)

Drought is just one cause of Africa’s current food crisis. The Food and Agriculture Organisation of the United Nations cites drought as the main problem in just 12 of the 27 African countries needing urgent food assistance today. A new report from the International Food Policy Research Institute (IFPRI), which, like the International Livestock Research Institute (ILRI), is a Future Harvest Centre of the Consultative Group on International Agricultural Research (CGIAR), outlines the other critical issues behind Africa’s current hunger. These include rural underinvestment, conflicts, AIDs, population growth and poor soils.

Click here to read the 31 January BBC article: Africa's hunger: A systemic crisis. For a copy of the report, visit IFPRI’s website: www.ifpri.org.