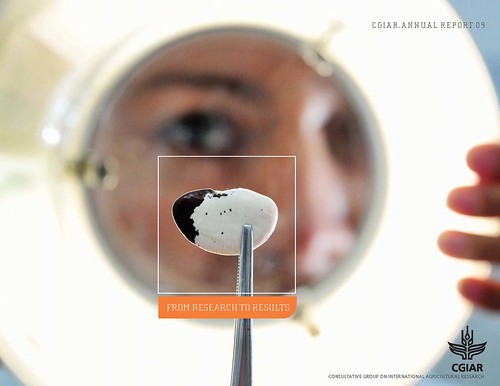 The annual report for 2009 for the Consultative Group on International Agricultural Research (CGIAR) is out.

The International Livestock Research Institute contributed the following article about development of crops that feed people and animals both.

'New varieties of sorghum are bred to better meet the needs of India’s 208 million livestock farmers for animal feed, as well as to feed its growing human population.

'Throughout the tropics, a lack of feed keeps farm animals underweight and underproductive, thereby preventing some 600 million poor farmers and herders from meeting fast-rising global demand for milk and meat. But thanks to a partnership between India ́s National Research Centre for Sorghum (NRCS), the International Crops Research Institute for the Semi-Arid Tropics (ICRISAT) and the International Livestock Research Institute (ILRI), new varieties of sorghum are being developed that can provide both nutritious food for humans and high-quality feed for livestock.

'The single most important source of animal feed on many small farms in Asia and Africa is not grass but rather the stalks, leaves and other residues of crop plants after harvesting. In India, for example, 44% of the feed that annually sustains all the country ́s cattle, buffalo, goats, sheep and camels is made up of such crop wastes. The rest comes from planted forages and a shrinking area of pastures and other common lands. Expensive feed concentrates—the mainstay of livestock production in rich countries—are used only occasionally.

'Although crop residues (also known as stover) have become the main source of feed for farm animals in developing countries, crop breeders have continued to focus their efforts solely on increasing grain yields and not on improving the yield and quality of stover. The NRCS-ICRISAT-ILRI partnership seeks to redress this oversight by focusing on sorghum, an important staple crop in India that is grown on nearly 10 million hectares throughout the country.

'The initiative has proved groundbreaking in demonstrating that traits for stover fodder quality and quantity can be incorporated into existing breeding programs to improve grain yields and has led the way for similar work on other major crops such as millet, groundnut, rice, maize and cowpea. New initiatives are also beginning for wheat and various leguminous crops.'