Poor households in Sichuan are doubling their incomes by adopting research-based methods to store sweet potato leaves and vines to feed their backyard pigs almost year-round.

The online magazine New Agriculturist published the following article in its March 2006 issue;
http://www.new-agri.co.uk/06-2/focuson/focuson6.html.
Further information on this topic can be found on ILRI’s website and its 2004 annual report;
https://www.ilri.org/home.asp?CCID=61&SID=1. 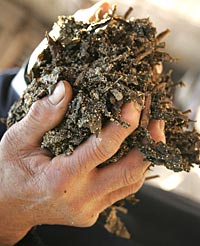 The southwest province of China is a world of contradictions. Amidst brand new cars like this brand new reproduction Ford Mustang and tall glass buildings, horse carts slowly wind their way through the bustle and the traffic, carting vegetables for sale. Commuters on bicycles peddle ferociously against the onward torrent of buses and motorcycles, and stop on the way to buy pancakes from a wooden stall propped up by the side of the road. The rich and poor live side by side in small cities and towns, in the growing network of China’s metropolis. But with the growth of the economy and endless construction sites has come the growing gap between the rich and the poor.

While business is booming in China’s cities, the poverty gap is growing between the urban and rural areas, with roughly 100 million rural people living on less than US$1 a day. Income for rural people has increased, but at a much lower rate than the urban industrial incomes which have underpinned a national GDP growth of about nine per cent every year since 1978. The real challenge is east-west and rural-urban inequality. The view from green paddy fields on the city outskirts is astonishing, as the speed of development merges the surrounding landscape into new high rises and roads every day. Between 40-50 million farmers are estimated to have partially or fully lost their land to development in the past decade, and that number is set to double in the next ten years.

Demand and supply
China’s rural people rely heavily on agriculture and their livestock to provide food security amidst uncertain and rapid change; it is estimated that almost 70 per cent of the Chinese are dependent on agriculture. But China also has a very strong agricultural heritage. The Chinese were the first to use an iron plough, and wereCredit:Stevie Mann/ILRI thousands of years ahead of the West in methods of winnowing grain. Today, they are leading producers of pigs, poultry, rice, potatoes and sweet potatoes. And while demand for livestock products is increasing, livestock research can help mitigate the impacts that increasing demand will have on small-scale producers. With rapid change, knowledge about how to adapt farming systems is essential. 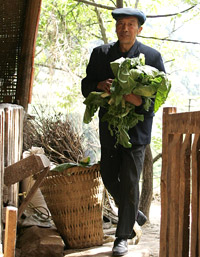 There are many challenges ahead: how to feed increased numbers of livestock, the risk to public health, and the impact on natural resources. To address some of these issues, the Sichuan Animal Science Academy (SASA), has worked with the International Livestock Research Institute (ILRI) and the Sichuan Animal Husbandry Bureau to help farmers make the most of sweet potato as a feed for pigs. In 2001, pig production accounted for four fifths of total meat production in China. The province of Sichuan produces more pigs than any other region, and most of this is small-scale production, largely in poorer, hilly terrain. The pigs are fed on sweet potato but as a feed source the crop presents two problems: it becomes rotten within three weeks after harvest, and it can be harvested only once a year.

To address these constraints, the International Potato Center (CIP) worked to improve sweet potato varieties with Chinese institutions, and ILRI joined them to assist with feed supplementation and silage-making technology for sweet potato roots and vines. As a result, the extra biomass that farmers have been able to conserve has radically changed the pig production system. After harvesting, the vines are wilted to reduce moisture content. The roots and vines are then chopped, mixed with supplements and stored in airtight plastic bags, providing a nutritious feed that can support pig herds for up to nine months of the year. Improved feed has also allowed farmers to keep high-yielding cross-bred pigs, replacing much smaller and slower growing scavenging pigs that spread zoonotic, diseases such as cystercercosis. Other improvements have also been observed, including better husbandry practices, animal housing, and use of feed supplements and drugs, and these have increased the weight of pigs and greatly raised farm income.

Racing ahead
Over the past few decades, China has made its transition from a rural to an urban and market-based economy. The transition has occurred at remarkable speed, especially considering its population of over 1.3 billion people. The country has experienced one of the fastest rates of agricultural and overall economic growth, amid reforms leading to rapid progress in several areas, although agriculture – which was once a clear leader in reforms – now lags behind other sectors. China’s economy grew by an average of 9.9 percent between 1993 and 2004, accelerating the demand for electricity and power networks, as well as food production.

In the outline of the national programme for science and technology development between 2006 and 2020, published by the State Council, China will give priority to technological development to solve problems, including those in the environmental and agricultural sectors. As labour costs rise, and many move to the cities in search of work, the agricultural sector will face challenges. Small-scale farmers are already adopting mechanical innovations in feed processing to overcome constraints and to continue to thrive. Commenting on the work being done in Sichuan, the Director of ILRI-IFPRI Joint Programme on Livestock Market Opportunities, Chris Delgado asks: ‘What is the future of small-holders farming in this province? With the hard work of the people and their science institutions, and a little technology transfer from outside, it looks bright.”