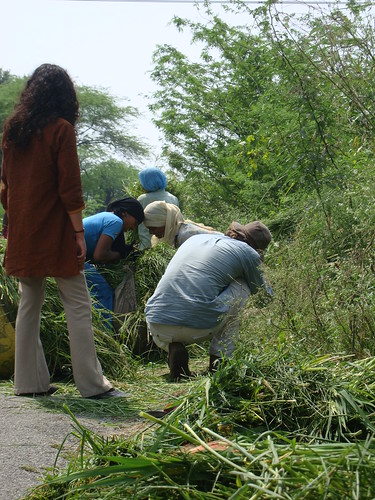 In December 2010, a special issue of Animal Nutrition and Feed Technology focuses on the fodder quality of crop residues and how this can be improved through the close collaboration of crop and livestock scientists in multi-dimensional crop improvement programmes.

Over the next two decades, rapid urbanization and rising incomes in the developing world will continue to feed an on-going livestock revolution. In India, this boom in the production of animal products will be driven by a demand for milk that is projected to increase by more than 80 million tons in 15 years.

Smallholder livestock producers will have new opportunities to raise their incomes on the back of this increasing demand, particularly the vulnerable communities occupying dry, marginal and remote lands that rely most heavily on their animals.

Feed scarcity and resulting high feed costs are one of the major constraints and threats to higher benefits from livestock otherwise offered by the rising demand for livestock products. New strategies for improving feed resources are urgently needed, but they need to take into account the increasing scarcity of the natural resource base, particularly of arable land and increasingly water.

Crop residues are the single most important feed resource in India, and the national feed resource scenarios predict that their importance for livestock feeding will further increase. In several parts of India, weight for weight, crop residue prices are now approaching, and sometimes even exceeding, half the prices of their grains.

Crop residues do not require specific land and water allocations, since these are required in any case for the production of grains. Unfortunately, the fodder quality of crop residues is often low, and in the past decades, efforts have been invested in upgrading the feeding value of crop residues (implicitly from cereals since leguminous residues can have excellent fodder quality) through chemical, physical and biological treatments.

However, these approaches have seen little adoption by farming communities. A different paradigm has been developed in this this special issue of Animal Nutrition and Feed Technology, namely, the improvement of crop residues at source through close collaboration of crop and livestock scientists in multidimensional crop improvement programs. Until recently, fodder traits of crop residues were largely ignored in crop improvement, although farmers were traditionally aware of differences in the fodder quality of crop residues even within the same species. Farmers’ perception of crop residue fodder traits could effect the adoption of new cultivars, resulting sometimes in the rejection of new cultivars that have been improved only for grain yields.

In response, the International Crops Research Institute for the Semi-Arid Tropics (ICRISAT) and the International Livestock Research Institute (ILRI) together with their partners from the Indian Council of Agricultural Research (ICAR) initiated several multidisciplinary research projects to create crop cultivars that better match the need of farmers, particularly in mixed crop-livestock systems which are dominant in many parts of the developing world.

The fundamental issues explored in these collaborative projects, and expounded in this special issue, are: (1) availability of livestock nutritionally-significant cultivar-dependent variation in crop residue fodder quantity and quality; (2) relationships between crop residue fodder traits and primary food traits and possible trade-offs between the traits; (3) technologies for quick and inexpensive phenotyping of large set of samples for simple fodder quality that are well correlated with actual livestock productivity; (4) breeding techniques for further genetic enhancement towards food-feed traits; and (5) upgrading crop residue fodder in value chains through densification and fortification.

These valuable contributions serve as eye-openers to researchers and present a strong case for further strengthening such collaborations between national and international crop and livestock institutions. More importantly, they pave the way for expanding work on the promising approach of producing dual-purpose varieties of key crops for mixed crop-livestock systems given that these systems will be crucial in feeding the next 3 billion people.