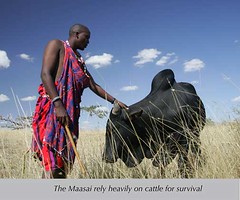 Pastoralists can take most of the credit for the survival of savannah wildlife herds in Kenya, since herding livestock is usually compatible with wildlife. 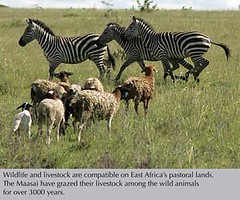 But development today is threatening pastoral lands and ways of life, particularly near growing urban areas.
In Kitengela, south of Nairobi National Park, an unusual group of community, government, private and other organizations is pioneering an approach to help pastoralists and their lands, livestock and wildlife thrive. A foundation pays pastoral families not to fence, develop or sell their acreage. Strictly voluntary, the program now leases 8,500 acres from 117 families; another 118 community members, with more than 17,000 acres, are waiting to join. The program aims to lease and conserve 60,000 acres—enough to allow the seasonal migration of wildlife to and from Nairobi National Park.

If this program fails and more fences and buildings go up, the annual migration of wildebeest and other animals will be halted, provoking the crash of the Athi-Kaputiei ecosystem, which even in wildlife-rich East Africa stands out for its spectacular concentration of big mammals—remarkably right in the backyard of burgeoning Nairobi. The success of this lease program depends on spatial information about where fences have been put up that are blocking wildlife migrations and where the land remains unfenced, allowing herds of wildlife to move through a corridor of open land to their calving grounds beyond. 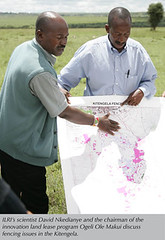 The maps needed for this project are being developed together by members of the Kitengela Ilparakuo Landowners Association (KILA) and scientists at the International Livestock Research Institute (ILRI). The participatory mapping combines expert skills with local people’s spatial knowledge. This joint work is stimulating broad-based decision-making, innovation and social change in Kitengela, where access to, and use of, culturally sensitive spatial data is now in the hands of community which is generating the information.

The maps are helping members of KILA focus on specific areas where they can still make a difference by keeping land unfenced. Just as importantly, the maps are creating a level playing field for the local Maasai, who face an array of powerful groups wanting to develop their traditional lands, from government officials to land speculators, shopping mall operators, building contractors, stone quarry companies, politicians and ordinary people hungry for a bit of land. The community, through its county council, is in the process of developing land-use plans using some of the maps generated by the community. The land-use plans will legislate the use of land, protect important landscape such as swamps, riverine, water catchment areas, open wildlife corridors (through land lease schemes) and rehabilitate degraded areas such as quarries. 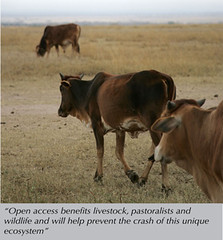 This project has succeeded in saving lands as well as livelihoods. There is now more grazing land for livestock and wildlife, and once eroded and degraded land is recovering, since the grazing pressure has been reduced. The Maasai are working hard to conserve the Kitengela plains and are benefiting from the presence of their wild neighbours through ecotourism projects. On the socio-economic side, household incomes have risen, school enrollment is up and women have been empowered.

Whether the maps are in time to stop the Kitengela sprawl and the crash of a unique wildlife-rich ecosystem at Nairobi’s back door will soon be known. Fifteen years ago Kitengela had under a dozen inhabitants and three kiosks. Today, the town has swelled to 15,000 residents, and more are arriving by the day. As the numbers of people have increased, the numbers of migrating wildebeest have dropped from 30,000 to 8,000 in the last 20 years. Despite its successes, the novel leasing program must expand to reverse losses not only of wildlife, but also of livestock and the lands that support both. In addition, KILA and its partners will need the support of strong and judicious land-use planning. Scientific mapping is giving KILA the evidence they need to persuade land-use planners to help them protect their lands.