Of the 7,616 breeds of domestic livestock reported to FAO, 1,491, or 20%, are classified as being ‘at risk’. What’s at stake in this ‘livestock meltdown’ is nothing less than the animal basis for world food security. If we are to adapt food production systems to radically changing conditions in the coming decades, animal as well as plant genetic diversity will be critical resources for doing so. Traditional breeds offer diversity, which is the only base for future selection and adaptation. The on-going loss of our livestock genetic heritage is tantamount to losing a road map for survival—the key to food security, environmental stability and improving the human condition. Here are five rare ‘vintage cows’ of Africa that could be part of that road map.

Only some 2,400 Sheko cattle remain alive. These relatively small animals, which are related to West Africa’s ancient N’Dama cattle, are found only in the remote corner of southwestern Ethiopia, near the Sudanese border, where the Sheko people bred them for millennia for their natural resistance to disease, particularly tsetse-transmitted trypanosomosis. The Sheko are believed to be the last remnants of Africa’s original humpless shorthorn cattle, which were probably first domesticated in this region of eastern Africa.

There are about 3.2 million Ankole cattle in five countries of East and Central Africa. The Ankole are drought-resistant and beloved by their keepers also for their uncommon gentleness, beauty, rich milk and tasty meat (believed also to be low in cholesterol). Rapidly expanding human populations, infrastructures and markets, however, are forcing more and more farmers to replace their indigenous African Ankole cattle with exotic breeds such as the black-and-white Holstein-Friesians dairy cows, which produce much more milk. At their current rates of decline, these hardy, graceful animals will disappear within the next 50 years. 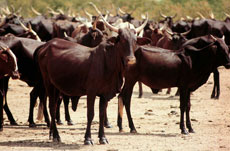 This large bony and typically red-coated animal has extremely long lyre-shaped horns. It is kept by pastoral Fulani people, who herd the animal across open semi-arid rangelands of the Sahel that criss-cross five countries of West and Central Africa. This is a dual-purpose milk and meat animal prized for its ability to cope with heat, ticks, insect bites and great water and feed scarcity. 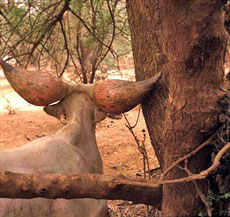 These hamitic longhorn humpless cattle inhabit the hot, humid shores and archipelagos of the Lake Chad Basin in Cameroon, Chad, Niger and Nigeria. They are large-bodied, typically white, and carry highly distinctive bulbous horns. The breed is adapted to the hot and humid climate and can survive long droughts. They are managed under traditional systems, feeding on grass on the small islands of Lake Chad. They are excellent swimmers and follow their herdsmen through the water as they travel from an island to another; their bulbous horns are considered useful in floating. The Kuri are highly fertile animals and excellent milk and meat producers. ILRI estimates the remaining population of Kuri, now threatened with extinction, to number only some 10,000 head.

The semi-nomadic Borana tribe in southern Ethiopia and northern Kenya herd the Boran, a medium- to large-sized and long-legged zebu animal that has considerable potential as a meat breed. On acquiring them early in this century, Kenyan ranchers judiciously crossed the original Ethiopian Boran with European breeds. This scheme to maximize the potential of an indigenous breed rather than attempt to replace it with exotic types has been highly successful. Today, the Improved Boran is one of Africa’s top beef breeds. Docile and well-adapted to hot, dry ranching conditions and to sparse pasture, these valuable animals have been exported from Africa to other continents, such as Australia, and from there to the USA.

Visit the online press room for further information and a series of short films and high-quality images of the third world’s unique farm animal breeds.