Findings from a decade of dairy research are giving millions of poor people better food, better livelihoods, and a better future. 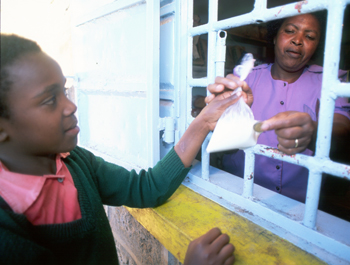 A collaborative dairy research project conducted in East Africa from 1997 through 2004 is bearing fruit. Its research findings persuaded Kenyan regulators and policymakers to engage and support, rather than disregard and harass, Kenya’s predominantly informal milk market, which trades in ‘raw’, or unpasteurized, milk.

Economists assess the direct impacts of the research-based policy changes on the Kenyan economy to be at least USD33.5 million per year. The new training and certification schemes recommended by the research project are now helping the country’s small milk producers and traders to provide safe as well as cheap milk products to millions of Kenyans poorest citizens. The methods this project used to upgrade informal dairy chains are now being taken up in other major milk-producing countries of eastern Africa and South Asia.

This award-winning collaborative dairy research work was funded by the UK Department for International Development with support from the Consultative Group on International Agricultural Research. It was implemented by the International Livestock Research Institute (ILRI), the Kenya Agricultural Research Institute and the Kenya Ministry of Livestock and Fisheries Development. Other key partners included the Kenya Dairy Board, Kenya Bureau of Standards and Ministry of Health, along with livestock farmers, small-scale milk vendors, and milk processors and packagers from the private sector; the international development organization Land O’ Lakes; and the non-governmental organizations Action Aid, Intermediate Technology Development Group, the Institute of Policy Analysis and Research, and Strengthening Informal Sector Training and Enterprise.

Impacts of pro-policy dairy policy changes in Kenya
Beginning in 2004, policy reforms in Kenya’s dairy sector have enabled many of Kenya’s nearly 40,000 small-scale milk vendors to enter formal milk markets. An independent panel of experts in 2008 estimated that these reforms are annually delivering to the Kenyan economy direct benefits of US$33.5 million as well as a further $130 million a year in indirect benefits, such as the new jobs generated by the newly enabled smallholder dairy sector and the better nutrition achieved in millions of poor households through greater consumption highly nourishing, but cheap, milk products. These returns were produced from a total investment of just $4.8 million ($0.6 million over each of the eight years of the research project).

Kenya’s new dairy policies recognize and regulate the activities of small-scale informal milk vendors, allowing them to operate more efficiently, at larger scale and with greatly reduced transaction costs. The impact assessment report determined that by 2006, Kenya had 1.8 million smallholder dairy farms, with 6.7 million dairy cattle producing 4 billion litres of milk each year, much of it marketed by 39,650 small-scale milk vendors. Nearly half the benefits of the policy changes went to producers, with the remainder going to consumers ($8 million), small-scale milk vendors ($4.1 million) and input suppliers ($5.1 million).

Spillover effects
Such pro-poor changes in the dairy sector are now being taken up by other countries. The Association for Strengthening Agricultural Research in Eastern and Central Africa has initiated a program on Dairy Policy Harmonisation in East Africa that recommends that regulators throughout the region implement similar policy changes. In July 2007, dairy regulators in Kenya, Rwanda, Tanzania and Uganda agreed to promote the training and certification schemes for milk hawkers that the collaborative research project had advocated. Hundreds of thousands of other small dairy farmers across East Africa could thus benefit from these reforms. And in 2008, the governments of India’s northeastern states are demonstrating strong interest to adopt similar pro-poor dairy policies.

Below is the summary of the Report for the Standing Panel on Impact Assessment of the Science Council of the CGIAR: Policy change in dairy marketing in Kenya: Economic impact and pathways to influence from research.

Summary of the Impact Assessment of the Smallholder Dairy Project in Kenya
Between 1997 and 2005, ILRI and its partners initiated and implemented a Smallholder Dairy Project (SDP) as a collaborative and integrated research and development initiative aimed at supporting the sustainable development of Kenya’s smallholder dairy sub-sector. The initial phase of SDP focused on the development of “best-bet” technologies to overcome farmers’ problems and to improve their livelihoods. The final phase developed policy-level outputs and actively engaged Kenyan government and policymakers, leading to change in the Kenyan Dairy Policy by September 2004. The new policy recognizes and regulates the activities of Kenya’s many small-scale milk vendors.

Among the research results SDP used as evidence to support policy change are the following data (recalculated by SDP in 2005).

In 2008 ILRI assessed the impacts of Kenya’s research-based dairy policy change on the country’s economy and determined the following.

Overall, these research findings on the highly significant farmers and consumer dependence on informal milk marketing and its employment generation potential proved crucial in influencing behavioural and policy change in the Kenyan dairy sector. The findings on employment generation, for example, attracted the interest of government agencies and people involved in designing Kenya’s poverty reduction strategy paper, some of whom, as a result, would later become strong advocates for the legalization of the country’s small-scale milk vendors.