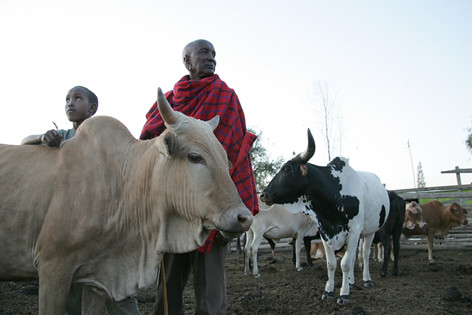 As East Africa’s iconic tribe changes with the times to keep its pastoral heritage alive, will the herders also be able and willing to save the wildlife populations around them? (photo credit: ILRI/Mann).

Every year, over a million people visit the national parks and game reserves in East Africa, generating up to nearly US$2 billion a year in revenue. The most famous of these parks are in the Maasai heartland straddling the Kenya-Tanzania border. This ‘Maasailand’ supports the most diverse concentrations of big mammals left on earth.

Often overlooked is the abundance of wildlife mixed with livestock and pastoral peoples on grasslands adjacent to the parks and reserves—and the ways these pastoral herders and their animal stock contribute to the balance of these wildlife-rich savanna ecosystems.

A new book, Staying Maasai? Livelihoods, Conservation and Development in East African Rangelands, looks at thirty years of research on East Africa’s iconic Maasai people. In it, a group of international researchers argue for big and deep changes in the region’s policies affecting Maasailand and its people.

Semi-nomadic herders have maintained a pastoral way of life, co-existing with the wildlife in this region, for several thousand years. But that balance appears to have reached its tipping point. A recent study by the International Livestock Research Institute (ILRI), for example, has shown dramatic declines of six species of wild ungulates (hoofed animals)—giraffes, hartebeest, impala, warthogs, topis and waterbuck—in Kenya’s famous Masai Mara Game Reserve, in just the last 15 years. The researchers found that these wildlife declines are linked to growing human populations crowding at the boundaries of the Reserve, which are transforming these former grasslands, the traditional ‘dispersal lands’ for wildlife, into urban settlements and crop and livestock farms, thus fragmenting the former wildlife habitats.

Staying Maasai? portrays the many ways Maasai are adapting to—and driving—rapid environmental, political and societal changes. Substantial components of the book are a product of a collaborative research program, ‘Assessing Trade-offs between Poverty Alleviation and Wildlife Conservation’, involving a multidisciplinary and international group of natural and social scientists and their Maasai collaborators, funded by the Belgian Government and coordinated by ILRI. The book’s authors encourage decision-makers to look to the Maasai peoples themselves for sustainable solutions to conserving both wildlife and pastoral lifestyles, noting that contrary to conventional wisdom, few Maasai families are yet benefiting much from wildlife tourism. A fresh look at land, pastoral and conservation policies is urgently needed to ensure the survival of this community and its wildlife-rich pastoral lands in Kenya and Tanzania.

The lasting value of pastoral livestock production
The research findings reported in this volume confirm the continued centrality of livestock to local livelihoods across Maasailand, making clear the lasting economic importance and resilience of pastoral livestock production. Katherine Homewood, professor of anthropology at University College London, who is a lead author and co-editor of the book, writes in the final chapter that livestock production should not be viewed ‘as some romanticized throwback to an earlier age, but as a robust and vital component of twenty-first century livelihoods in Maasai rangelands.’

Four policy lessons
With a wide range of livelihood strategies now being pursued in East Africa’s Maasailand, pastoral policy needs to take better account of the situation evolving on the ground.

(1) Support livestock production.
First and foremost, says Katherine Homewood, policy needs to take account of ‘the central nature and resilience of livestock production in the rangelands, and to embrace and foster pastoral production, supporting mobility, access to key resources, veterinary provision and marketing infrastructures.’ Homewood argues that ‘Rather than dismissing pastoral production as backward, unproductive and as failing to contribute to the national economy,’ Kenyan and Tanzanian national policies need to recognize the actual worth of this form of land use. She says these issues are insufficiently addressed in Kenya’s draft National Livestock Policy and that Tanzania’s current policies not only deny pastoralists some of their basic rights (by evicting pastoralists from some areas and denying others grazing land tenure), but in addition are counter-productive to Tanzania’s stated aims for achieving environmental and economic sustainability.

(2) Limit cultivation.
Second, governments need to be more realistic about the potential for, and impacts of, intensifying or extending crop cultivation across the rangelands to replace pastoralist livestock production. ‘It is unrealistic to envisage a major increase in food production from cultivation in arid and semi-arid rangelands,’ writes Homewood, ‘given the agro-ecological limitations both of water availability and of soil fertility.’

(3) Encourage non-farm employment.
Third, governments need to foster potential for non-farm employment in Maasailand through rural industries and better education. ‘The potential of pastoral systems will be realized only with better educational and rural diversification opportunities,’ says Homewood, ‘and acknowledgement of the importance of pastoral livestock production.’

(4) Distribute tourist revenues.
Finally, governments and conservation groups need to rethink their understanding of the contribution of wildlife conservation to rural livelihoods. Homewood concludes that ‘The structure of the tourist industry needs to change to allow landowners in Kenya to capture more than the 5% of revenues they are estimated to receive.’

For more information on the book Staying Maasai? and the complexity of ILRI’s work, click on the links below.