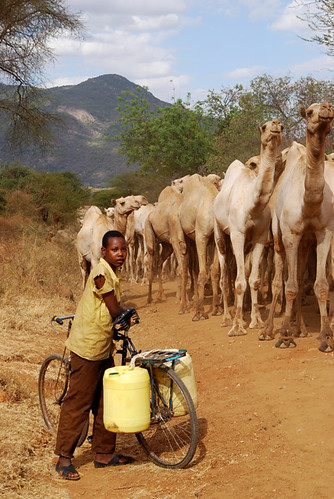 Camels walk from Somalia to Nairobi, Kenya (photo on Flickr by Matteo Angelino).

As hunger spreads among more than 12 million people in the Horn of Africa, a study by the International Livestock Research Institute (ILRI) of the response to Kenya’s last devastating drought, in 2008–2009, finds that investments aimed at increasing the mobility of livestock herders—a way of life often viewed as ‘backward’ despite being one of the most economical and productive uses of Kenya’s drylands—could be key to averting future food crises in arid lands.

The report, An Assessment of the Response to the 2008–2009 Drought in Kenya, suggests that herding makes better economic sense than crop agriculture in many of the arid and semi-arid lands that constitute 80 per cent of the Horn of Africa, and supporting mobile livestock herding communities in advance and with timely interventions can help people cope the next time drought threatens.

The authors say that recommending that most livestock herders switch to farming crops or move to cities is simply unrealistic in this region’s great drylands, which will not support row crops without extensive irrigation, which is scarce and often impractical. An estimated 70 million people live in these drylands, and many of them are herders. In Kenya, the value of the pastoral livestock sector is estimated to be worth USD800 million. And the Intergovernmental Authority on Development in Eastern Africa, which takes a regional approach to combating drought in six countries of the Horn, estimates that over 90 per cent of the meat consumed in East Africa comes from pastoral herds.

Drylands in the Horn of Africa are too large to ignore,” says Jan de Leeuw, an ecologist at ILRI and a lead author of the drought report. “With only 20 per cent of Kenya’s land suitable for arable crop production, and with an expanding population, the country cannot continue ignoring these dry areas without hurting people’s food production and livelihoods. Some of the worst impacts of the drought can be avoided if the region’s dryland livestock systems are well regulated.”

The best way to prevent famine in arid lands is to ensure herder access to critical dry-season grazing and watering areas. All the herders interviewed in this research assessment reported that obstacles to the movement of their herds—caused by lack of roads, land conflicts and demographic pressures—constituted the largest problem they had in protecting their animals and livelihoods.

Thus, the ILRI study findings reinforce what others have found—that migratory herding is the most productive use of much of this land.

A second major problem was a dearth of functioning commercial livestock markets. Destocking—where herders sell off those animals they can no longer feed or water to the government—does not work where there are no dynamic livestock markets. Thus, during droughts, it is more helpful for local government agencies to organize the slaughter of excess cattle on site—paying herders for the fresh meat, and giving the meat to the local herding communities to consume—than it is to ship large amounts of hay or other fodder to drought-struck areas, or to try to transport cattle out of such areas.

The authors found that investments such as better roads, markets, information access, agricultural outreach and schemes that pay herders for wildlife conservation and other ecological services may cost money in the short run, but in the longer term will help stabilize dryland communities and prevent famines.

In general, the ILRI report found that the response to the 2008–2009 drought, while better than that for a major drought a decade earlier, was still too little, too late.

The report was funded by the European Union to help Kenya improve its drought management system. Since 1996, with support from the World Bank and the European Union, the country has been moving to improve drought management through a national arid lands management program. Still, the 2008–2009 drought was devastating; more than half of all livestock died in many districts. The loss of livestock assets in successive droughts has had the effect of steadily impoverishing many herders in Kenya and other countries of the Horn of Africa.

To harvest the economic and other potential of Kenya’s drylands, we need new approaches and effective models for managing risk and promoting sustainable development, especially in the face of climate change and increasing droughts in many areas, said de Leeuw. Investments in pastoral livestock systems and markets, and in transportation, communication and energy infrastructure, is vital, he said.

The best way to tap into the potential of the drylands is to invest in systems that support pastoral livelihoods, rather than ignoring them and hoping they go away,’ said de Leeuw. ‘While such investments are risky, these areas support most of the animal protein consumed by the residents of the Horn countries.’

Unfortunately, however, drylands and the pastoral livelihoods they support have long borne the brunt of underdevelopment, underinvestment and ineffective government policies that have tended to encourage mobile herders to transit into more settled ways of life. Many dryland regions lack the infrastructure and services that would help people cope with the hazards of climate change, variable rainfall and droughts. These and other factors are partly responsible for the Horn’s recurrent hunger crises.

Furthermore, high population growth is putting pressure on agricultural farmland and urban centers in the Horn of Africa. More people (including non-pastoralists) are settling the drylands, as they are the frontier for agricultural expansion, said Polly Ericksen, another co-author of the ILRI paper. ‘The resulting sub-division and development of communal lands raises concerns about the management of Africa’s drylands, highlighting the need for national policies on how such lands are used.’

One successful national program, for example, helps provide income to pastoralists, while at the same time preserving the ecosystems. Kenyans herders who live near the country’s protected wildlife areas are receiving payments for managing their ecosystems, and these payments are providing a stable, reliable and predictable source of income that both reduces poverty and protects wildlife.

Such ecosystem protection efforts are going on in the Masai Mara region of southern Kenya and in the Kitengela rangelands near Nairobi, where Maasai people have formed ‘eco-conservancies’ to protect their grazing areas for livestock and wildlife alike.