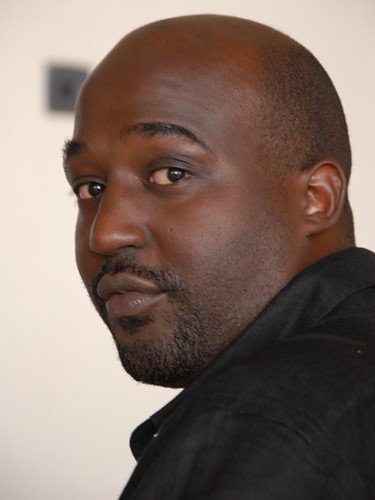 ILRI scientist Andrew Mude leads a project introducing insurance to the pastoralist communities of Kenya’s remote northern Marsabit District, which is also where Mude is originally from (photo credit: ILRI).

Before Mude went to the studio in Nairobi to do this live television news interview, he sat down with ILRI staff to prepare what he wanted to say. Here’s a summary of what he had on his mind.

The value of the pastoral livestock sector, which includes meat, milk, and other products from these animals, is estimated to be worth US$800 million annually. And roughly 90 per cent of the meat consumed in East Africa comes from pastoral herds.

Research confirms that the pastoral livestock sector is not only productive and critical to Kenya’s food security, but also an optimal way to manage and maintain drylands and the livelihoods of those who live off them.

At a time when the government and donors are looking for long-term solutions to addressing food security, our research suggests that herding makes better economic sense than crop agriculture in many of these arid and semi-arid lands. Supporting semi-nomadic livestock herding communities with timely interventions before a crisis hits can help people cope the next time drought threatens.

Recommending that livestock herders switch to farming crops is simply unrealistic for most of the people inhabiting this region’s great drylands; building vast irrigation systems here is simply not feasible in both economic and ecological terms.

Droughts have always been part of life for people in drylands but these droughts are now coming more frequently and affecting many more people across rangelands that are becoming more and more fragmented. Farmers and livestock herders need options and support to cope with recurring drought, particularly in the face of other kinds of climate change. Luckily, options exist.

For example, my organization, ILRI, based here in Nairobi, is working with UAP Insurance, Equity Bank, and SwissRE to roll out an insurance program for several thousand livestock keepers in Marsabit District to protect them against drought.

Standard types of insurance are not feasible for remote livestock herders such as those in Marsabit, where throngs of officials would be needed to verify livestock deaths before insurance companies would make pay outs to the insured. So we came up with a model that makes use of satellite data showing the state of a region’s vegetation. When the satellite data show that the available forage drops below a given threshold, where one would expect most livestock to perish, all insurance policyholders are paid, whether or not their animals died. With tweaking to cater for various local conditions and lots of training to educate communities that have never before had insurance schemes available to them, these kinds of programs could be extended across the drylands of Africa.

Watch this 7-minute television news interview of ILRI’s Mude, who argues that pastoralism is a system that evolved to take advantage of arid and semi-arid lands, such as those suffering drought now in the Horn of Africa: CNBC Africa: Investing in pastoralism with Andrew Mude, 24 Aug 2011.