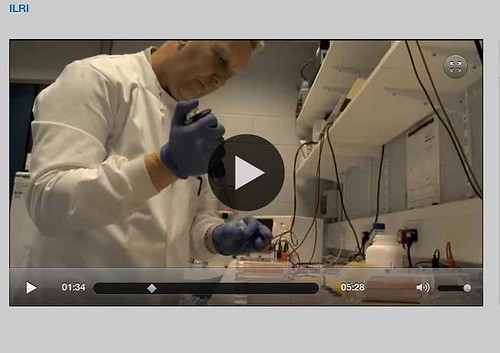 A screenshot of a film from the catalogue of over 100 livestock-for-development films that are now online (photo credit: ILRI).

An updated catalogue of high-quality livestock-for-development films is now available for downloading. This catalogue features over 100 short videos and several 15-to-20-minute documentaries produced by the International Livestock Research Institute (ILRI) since 2006.

The 2011 collection includes features about the launch of one of the most advanced biosciences research facilities in sub-Saharan Africa, in Nairobi Kenya, where dozens of young scientists are researching ways of fighting hunger, and a new 5-year competitive grants program for researchers interested in biological innovations for food security. This year’s catalogue also includes videos on a workshop ambitious to scale up ways of empowering women farmers in Africa and Asia and films about how scientists are working to better control a wasting cattle disease that afflicts African livestock known as trypanosomosis.

Older films cover the development, in Kenya, of the first livestock insurance for African pastoralists, an award-winning film on balancing the needs of people, lands and wildlife in the Masai Mara, and interviews with scientists who are working to improve farmers’ capacity to cope with climate change in poor countries.

The catalogue lists all ILRI films and gives simple instructions on viewing them online or downloading them to your computer.