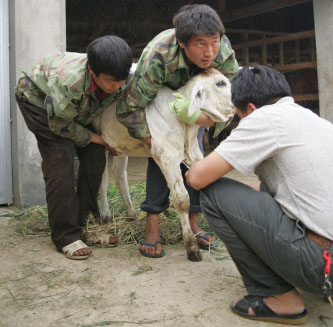 Livestock are ubiquitous in the developing world. The ‘big five’—cattle, sheep, goats, poultry and pigs—as well as 9 other popular farm animals and 26 or so more specialized species are raised by more than half a billion people either on pastoral rangelands by nomadic herders, or on mixed farms by smallholders who raise crops along with livestock, or in peri-urban areas by people who raise a few animals in their backyards. All of these small-scale livestock enterprises matter to developing-country governments because livestock account for some 30 per cent of their agricultural gross domestic product, a figure expected to rise to 40 per cent by the year 2030. The diverse livestock production systems, like most crop production systems, are changing in response to globalization, urbanization, environmental degradation, climate change and science and technology. But the fastest changes are occurring within the livestock systems. That’s because the developing world’s rising human populations and household incomes are causing demand for milk, meat, eggs and other livestock foods to soar. As one would expect, livestock markets are growing and changing to serve that growing demand. What’s less appreciated are the changes being wrought by many of the billion-plus small-scale livestock keepers and sellers of the developing world who are changing the way they do business to help meet that growing demand. The rate of change within the livestock sector is so rapid that many local populations of livestock developed by small-scale farmers over millennia no longer have time to evolve adaptations to their new circumstances or the new needs of their owners. They are simply dying out, and at unprecedented and accelerating rates. The Food and Agriculture Organization of the United Nations estimates that on average a breed disappears every month and that 20 per cent of our uniquely adapted breeds of domestic animals are at risk of extinction. Over the last 150 years, farmers in industrialized countries supplanted their indigenous farm animals with a few high-producing breeds of a few species (chickens, pigs, cattle) suited to highly intensified production systems. The result is that 70 per cent of the world’s known livestock genetic diversity now resides on small farms and in remote regions of developing countries. With all the challenges facing developing countries and their one billion people living on less than a dollar a day, the question arises as to what immediate practical and cost-effective steps could be taken to preserve the wealth of their livestock genetic diversity. From a research viewpoint, it’s clear that if we’re going to manage the world’s remaining livestock genetic resources well, we’ll have to characterize the remaining populations to decide which are worth saving and why, we’ll have to find ways of broadening use of those populations deemed useful, and we’ll have to conserve the most important livestock genetic diversity for possible future use—by poor and rich farmers alike. From a political viewpoint, we’ll need new and appropriate institutional and policy frameworks, as well as lots of policy discussions, to find ways to strengthen national and international programs that support the conservation of livestock biodiversity. While the political issues are being discussed at length at national and inter-governmental fora, four practical things can be started immediately to ensure that the world’s remaining livestock biodiversity is conserved for future generations.

How science can help It’s clear that most of the developing world’s indigenous livestock populations will not be able to adapt in time to their rapidly changing environments and circumstances; we’ll need new strategies and interventions to improve our conservation and husbandry of these resources. It’s also clear that advances in several scientific fields promise to give rise to those innovations. On-going breakthroughs in livestock reproductive technologies and functional genomics, for example, as well as in the information fields of bioinformatics and spatial analysis, are being systematically marshaled for the first time to address this challenge.. And policy and agricultural systems analysts are today articulating more judicious thinking about the production and funding of global public goods. Finally, whereas societies and countries tend to differ in their short-term interests in livestock production, their long-term interests—such as learning how to cope with unforeseen changes in livestock production systems and their environments—tend to converge. This creates real opportunities for international scientific, environmental and aid agencies to work with developing countries in collective action to conserve the world’s remaining livestock genetic diversity.

This brief is based on a paper, Dynamics of livestock production systems: Drivers of change and prospects for animal genetic resources, prepared by Carlos Seré, Gabrielle Persley and Ed Rege (International Livestock Research Institute [ILRI]) and Akke van der Zijpp (University of Wageningen) as one of four overview papers for a Science Forum opening the First International Technical Conference on Animal Genetic Resources, organized by the Food and Agriculture Organization of the United Nations in Interlaken, Switzerland, 1–7 September 2007. At this conference a report on the State of the World’s Animal Genetic Resources for Food and Agriculture was finalized. The report and the overview paper summarized here may be downloaded from the FAO website at www.fao.org/ and from ILRI’s website at www.ilri.org/

for Coping with Change in the Livestock Sector

2 thoughts on “Protecting breeds for people”