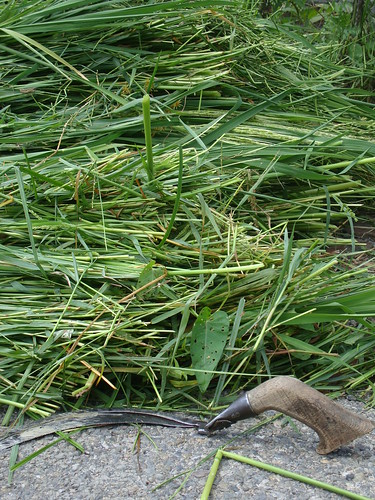 In 2012, a group of researchers at the International Livestock Research Institute (ILRI) worked with partners at the World Bank, under the direction of Jimmy Smith, then a senior livestock advisor at the Bank and now director general of ILRI, in identifying investment opportunities for ruminant livestock feeding in developing countries.

‘Driven by population growth, increasing demand, stricter quality and safety standards for animal source food and increasing competition for land and water resources, the livestock sector is changing rapidly. Within this changing landscape, smallholders with crops and livestock will remain the mainstay of the sector in developing countries for some decades to come.

For example, the projections in this report foresee an increase in cattle, sheep and goat populations in the mixed crop-livestock systems in the developing world from 467 million to 648 million adult cattle equivalents. However, also here, the abovementioned mega-trends and the resulting competition for feed resources imply that these systems will have to intensify to ensure an acceptable livelihood for its producers.

‘Enhancing the quality and quantity of feed, as one of the most important factors of animal production will play a critical role in this process of intensification. However, feed improvement should not be seen in isolation, but rather be assessed as part of the greater value chain, including all stakeholders. For example, investing in feed improvement without markets to sell the increased production from this investment or without an adequate feed quality control regulatory framework, would yield negative returns.

This report follows a step-by-step analytical framework that will provide the priority investments and actions in technologies, policies, and institutions.

‘As the first step in this framework, the most promising value chains, where feed-related strategies and investments are most likely to have significant impacts, have to be identified. On the basis of the key characteristics of (a) growth and market opportunities, (b) number of poor and pro-poor potential and (c) the supply constraints, in particular disease risk and feed resources availability, this report identifies first Sub-Saharan Africa and South Asia as priority areas, and then, within these areas, it identifies three commodity value chains in five regions of particularly great potential to benefit poor producers and consumers. They are:

‘The framework was then used to analyze the diversity of feed types, the availability of feed sources both from within and from outside of local systems, based on informant interviews and quantitative modeling of the current situation and with projections to 2030. Detailed data for each feed type and source are available in the main text, but the general trends show:

‘Based on these projections to 2030, opportunities for feed-related investments with major positive impacts on the poor are then identified. A number of strategies, policies, technologies, and services come to light as especially promising areas for such investment in a variety of scenarios. Applying the assessment framework to each of the three value chains yielded similar results for all chains. First of all, they stress that addressing feed related issues in the context of evolving value chains requires combinations of public and private investments: policies, strategies that facilitate adoption and market engagement with reduced transactions costs such as improved access to knowledge and services for smallholder producers and other market agents together with adoption of improved feed technologies.

‘The more specific areas of improvement that warrant priority in targeting investments are:

‘While for many households increasing animal numbers is perceived as attractive, there are severe environmental limitations of the extent this is possible. Policies and investment that increase per animal productivity, such as adequate ration formulation and emphasis on mineral supplementation in the feed and nutrition domain, as well as genetic and health improvement related investment will be important. However, in some areas, increased efficiency (producing the same with fewer animals, or more with the same number of animals) can also be achieved through incentive systems such as payment for environmental services.

‘Ranking those investments regarding their economic return constitutes the final step in the analytical framework, underpinning this study. The analysis shows that for an individual household, the increase in animal numbers is the most attractive option, as has also been proven in the past.

Indeed, according to FAOSTAT (2010) data, most (57 percent over the period 1990–2010) of the increased production in Sub-Saharan Africa comes from an increase in animals, and not from increased productivity per animals. This is obviously not sustainable.

‘The key challenge therefore is to increase the profitability of raising productivity per animal. As better feed utilization will be a critical factor in enhancing the profitability and hence in ensuring the long term sustainability of these system, it is therefore encouraging that in most evaluations feed improvements (and in particular the use of crop-residues) rank from the third to the fifth place. The analytical framework also provides a ranking of the importance of timing over the 2010–2030 period in which investments are made. The results show that in general a fast trajectory (i.e. transformation early in the 20-year interval) is associated with relatively higher returns accruing to investments in selected feed types, compared to a “slow” trajectory. Fast action is therefore recommended.

‘The results of this study demonstrate that the assessment framework developed could be applied readily in other systems, and at the same time provides a basis that can be further built upon.