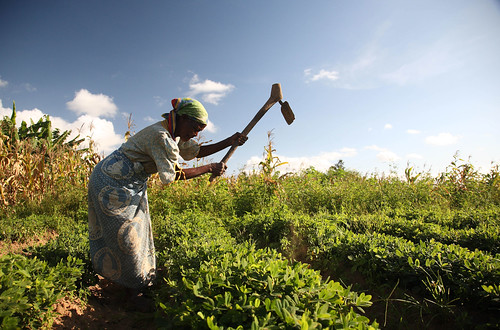 Researchers in eastern and southern Africa are calling for a new regional and integrated approach to address high food prices associated with global food shortages. They are doing this to help prevent a repeat of the global high food price crisis of three years ago.

Under the leadership of the Association for Strengthening Agriculture Research in Eastern and Central Africa (ASARECA), a regional body that seeks to transform agriculture and improve livelihoods, a team of researchers from key national, regional and international organizations in eastern and southern Africa (ESA) have determined that a ‘regionally coordinated response . . .  is potentially more effective in responding to the food price crisis than individual country responses.’

This is one of the key findings from a 2009 study that investigated food-price changes in the national and regional markets in eastern and southern Africa, which would provide an ‘evidence base for effective policy action.’

Joseph Karugia led a core team of researchers who were coordinated by the Regional Strategic Analysis and Knowledge Support System-East and Central Africa (ReSAKSS-EA), which is based in Nairobi, Kenya, at the International Livestock Research Institute (ILRI). Karugia says that ‘Regional blocks can become effective avenues for policy creation and implementation because they offer a much wider and stronger platform to address the challenges posed by the global food price crisis and to exploit the opportunities that high food prices may offer.’

Between 2007 and 2008, most countries in the region (and across the globe) experienced a rise in food prices that threatened the livelihoods of many of the region’s poor. Causes of the rise in prices were attributed to rising incomes and growing uses of food grains for bio-fuel production and animal feeds. In addition, an increasing world population and urbanization, coupled with high agricultural input prices, reduced world stocks of food staples and exports. Declining agricultural resources also contributed to the low supply of food.

Unlike past food-price spikes, such as those in the mid-1990s, where only a few commodities were affected, the recent rise in prices saw substantial increases in the price of the world’s key cereals, oilseeds and dairy and meat products.

For resource-poor farmers and consumers in Africa, high prices translated into higher costs of living occasioned by the increase in the prices of basic foods and staples such as maize, rice and wheat. Prices of different foods across many countries in the region went up by between 11 and 50 per cent between March 2007 and March 2008.

In the wake of the crisis, ASARECA brought a team of key researchers together in a study to find out ‘the magnitude and implications of food prices’ in the region. ‘One of our key aims was to come up with practical short-, medium- and long-term options for governments and other stakeholders for addressing the problem posed by the crisis,’ Karugia says.

The researchers analyzed trends and outlooks in individual countries as well as the region and presented evidence about the regional food situation. They also explored connections between high domestic food prices in this period and global food prices and examined regional and national dimensions of food-price increases and how they related to food security in the region.

From the study findings, presented in a paper, ‘Responding to the food crisis in eastern and southern Africa: policy options for national and regional action’, researchers argue that the considerable scope offered by regional blocks such as the East Africa Community (EAC), the Common Market for East and Southern Africa (COMESA), and the Southern Africa Development Community (SADC) provides an opportunity to create and implement regional policies and strategies to improve food production, distribution and availability in ways that individual countries could not handle alone.

The findings of this research suggest that new ways of approaching food distribution can improve food security in the region by for example, enabling improved regional trade that would allow easier movement of foods, especially ‘non-tradeable’ commodities such as bananas, shipped from countries where they are readily available to countries where consumers face food shortages. This model of food distribution could effectively deal with challenges that result from failure of staple crops such as maize. This way, the report says ‘the income effect of rising food prices could be dampened if it is relatively easy for the household to substitute one staple food whose price is already rising with a cheaper food product that is nutritious and as easy to handle as the previous one.’

Findings from this study provide thought-provoking perspectives useful to policymakers and governments in managing the frequent food crises in the region.

The findings highlight the important role of regional trade, Domestic food prices are, to a large extent, determined by local and regional demand-and-supply conditions; if policies on informal trade were improved, this region’s food security would also improve. The researchers note that an inability of households to find alternative cheaper nutritious foods would lead to ‘lower resource allocation towards non-food items’. This would then affect other sectors, such as education, health care and water and sanitation, with the ‘eventual deterioration of human capital and overall household welfare.’

Although rising food prices are contributing to food price inflation, the researchers note that the domestic markets in the ESA region are resilient and are not always directly affected by global events. Arguing that the best way to address the food price crisis is to do so regionally, they say policies should aim to ‘increase household purchasing power, have no negative impact on food supply response and should not reduce income of poor food sellers.’

This study calls for paying renewed attention to the agricultural sector, which is essential for improving production. It also notes that high food prices provide incentives to the private sector to invest in the agricultural sector. However, productivity increases will require significant and sustained investments in agricultural research and extension, as well as development of agricultural and general infrastructure along with credit and risk-management instruments.

The complete findings of this research can be accessed on https://cgspace.cgiar.org/bitstream/10568/184/1/resakss%20workingpaper27.pdf

For more information please visit the websites of ResaKSS and ASARECA.