Highly valued livestock waste away in the drought-hammered Horn of Africa. 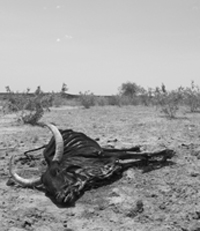 Livestock in the thousands are dying daily in a drought ravaging Kenya and its neighbours in the Horn of Africa.Animals are in the news everywhere these days in the Horn of Africa. While disease control agents are on the look-out for sick or dead chickens, to spot what could be bird flu and prevent its spread, everyone else is fixed on a more daily sight: that of starving cattle wandering city streets in desperate search of grass. When too feeble to walk, the animals lay down to die.

Just five years ago, Kenyans were appalled by images from the UK of mass slaughter of hundreds of
thousands of cattle to stop the spread of foot-and-mouth, a disease endemic in Kenya and much of the developing world, where its appearance hardly raises a stir. Maasai pastoralists in particular thought the British crazy as well as cruel to kill so many and such valuable animals and offered to buy them from the ‘mad Englishmen’.

But the daily spectacle of cattle, sheep and goats dying across the parched countryside and in the city centres and leafy suburbs of towns and cities in the drought-hammered Horn may be even harder to bear. Livestock are valued highly here; they are the basis of livelihoods of most poor rural people, who, in the annual dry seasons, lose weight along with their farm animals. But these countries are too poor to deploy bullets for mercy killings. So animals die here like the poorest people do, slowly, painfully and in full view of everyone.

Debate on Africa's food crisis
Click here to read a debate 'Head-to-head: Africa's food crisis', from BBC News between Nicholas Crawford, an official from the UN's World Food Programme (WFP) and Tajudeen Abdul-Raheem, a pan-Africanist and Director of Justice Africa, on what is causing Africa's deepening food crisis and what the solutions might be.