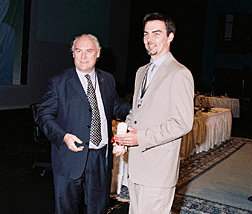 Simon receives his awardSimon Graham, a veterinary immunologist at the Nairobi-based International Livestock Research Institute (ILRI), was bestowed the ‘Promising Young Scientist Award’ by the Consultative Group on International Agricultural Research (CGIAR) on 7 December 2005 by Ian Johnson, CGIAR Chairman and World Bank Vice President for Sustainable Development. This prestigious award was presented at the annual general meeting of the CGIAR, held in Marrakech, Morocco.

The award went to 33-year-old Graham for his research leading to the development of a sensitive and robust system for screening molecules that cause East Coast fever (ECF), a fatal disease of cattle in sub-Saharan Africa. Graham’s research, based at ILRI’s Nairobi laboratories, may also contribute to ongoing efforts to control tropical theileriosis, a cattle disease which puts 250 million cattle around the world at risk. 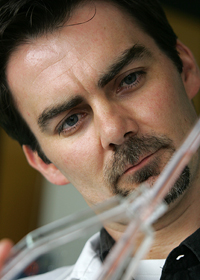 During his first post-doctoral position at the Centre for Tropical Veterinary Medicine, Edinburgh, UK, in 1998, he developed an improved rapid screening and production of vaccines against the protozoan parasite Theileria annulata, which is responsible for tropical theileriosis.

In 2000, Graham joined a large multidisciplinary research team at ILRI whose goal is to develop a ‘subunit’ Simon At Workvaccine against the related protozoan parasite Theileria parva. (Subunit vaccines are based on molecular bits of parasites rather than whole parasites.) T. parva causes East Coast fever (ECF), which costs 11 countries of eastern, central and southern Africa US$300 million a year. ECF puts 28 million cattle at risk and annually kills 1 million animals, 90 percent of which are kept by poor dairy farmers and herders. There is a high demand from poor livestock owners for a cheap, effective, safe and easy-to-deliver subunit vaccine against this devastating disease of cattle.

Simon Graham and his ILRI team are working in collaboration with several centres of excellence, including the veterinary pharmaceutical giant Merial and a leading human vaccine research group at the University of Oxford, UK, to evaluate the ability of these molecules to protect cattle against ECF. Initial results are encouraging—there appears to be a significant association between an animal’s induction of killer T-cell responses and its levels of protection against development of disease. Graham’s results have within a short space of time had a major impact in moving the research close to its ultimate goal of producing a vaccine that will sustainably control not only ECF but also tropical theileriosis. The vaccine candidates identified by Graham have been filed with the US Patent & Trademark Office and the research is now being prepared for publication in the prestigious journal Proceedings of the National Academy of Sciences (PNAS).