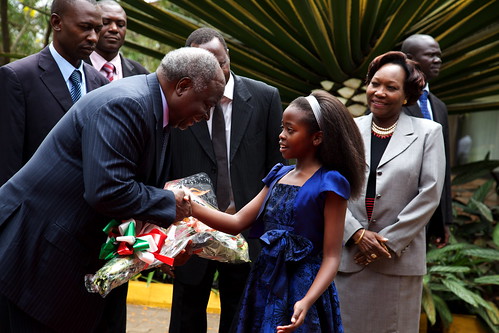 Kenya President Mwai Kibaki receives flowers from Renee Njunge on his arrival at ILRI for the official opening of the Biosciences eastern and central Africa (BecA) Hub on 5 November 2010. Looking on is Beth Mugo, the minister for public health and sanitation (photo credit: ILRI/Masi).

Located at, and managed by, the International Livestock Research Institute (ILRI) in Nairobi, Kenya, the BecA Hub provides a common biosciences research platform and related services and capacity-building to the science community in Africa and beyond.

The laboratory facility at the Hub brings to par Africa’s research capability with that of the world’s most developed countries. Africa’s scientists, students and global partners can now conduct advanced biosciences research, and get advanced training in biosciences, without leaving the continent. The Hub is a focal point for the African agricultural research community and its global partners.

The BecA Hub began in 2004 as part of an African Biosciences Initiative of the African Union/New Partnership for Africa’s Development. This initiative was part of a framework of Centres of Excellence for Science and Technology in Africa and the Comprehensive African Agricultural Development Programme.

The Hub is supported by many partners and donors. The Canadian International Development Agency funded renovation of laboratories already existing at ILRI’s Nairobi campus as well as construction of new facilities. The Syngenta Foundation for Sustainable Agriculture is helping to fund the BecA Hub’s operations through 2014. Other investors are supporting specific research and training projects at the Hub.

The official opening at ILRI brought together government officials, donor representatives, researchers and the local community in a colourful celebration of the contributions agricultural research is making in addressing some of Africa’s most pressing problems.

For more information about the BecA Hub, visit hub.africabiosciences.org and www.ilri.org or email BecA-Hub@cgiar.org.

Watch a short video film about what young students and scientists think about working at the Hub: ‘The BecA Hub at ILRI—A new research facility in Africa and for Africa’.

Read articles that appeared in the media about the opening:
Highlights from speeches at the opening of the Biosciences eastern and central Africa Hub at ILRI
New law to promote agricultural development, says Kibaki
New laws key in war on hunger: Kibaki