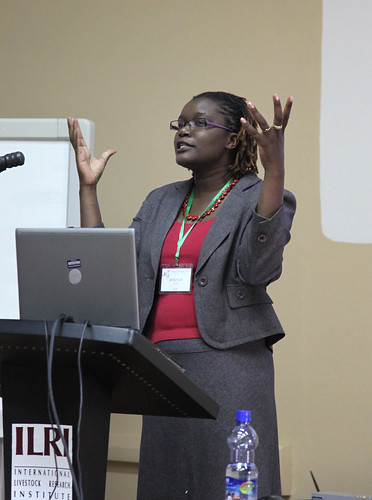 Agricultural intensification in many parts of Africa has meant that traditional food crops such as bananas and beans have entered sophisticated market chains which, though they provide benefits, also carry certain risks for smallholder producers, most of whom are women.

Jemimah Njuki, a Kenyan sociologist and gender specialist at the International Livestock Research Institute (ILRI), says that ‘despite women’s involvement in agricultural development in rural parts of Africa, how they benefit from this involvement is often unclear, because as commodity market chains become increasingly commercialized, they often end up marginalizing the women they sought to help in the first place.’

In a keynote speech at the opening of a workshop on ‘Gender and Market-oriented Agriculture: From Research to Action’ (#AgriGender2011) being held at ILRI’s campus in Addis Ababa, Ethiopia, Njuki noted that ‘with the emergence of regional and export markets, as soon as women’s crops become profitable, they are no longer women’s crops. And we can end up doing as much harm as good.’

Cautionary tale
Njuki told a story to illustrate this. It’s about a farmer named Mercy that she knew and worked with in Malawi. Mercy is a smallholder bean farmer from Chinseu Village who often intercropped her beans with maize on her small plot of land. Using little fertilizer or other farm inputs, Mercy produced between 50 and 100 kilogrammes of beans in a good year. Her family consumed half her bean crop at home and she sold the remainder on the roadside near her village. She used the money she earned from the sale of the beans to buy food and clothes for her family.

When a new farming project was started in Chinseu, Mercy got access to improved bean varieties and markets. Because the new bean variety could not be intercropped, she had to grow the beans on a different plot of land from her maize. The investment paid off, however, and in the first year she produced nearly one ton of beans. To sell the increased produce, she needed to find new markets, and these were far from her village. Her husband thus started to transport the surplus beans to the city for bulking and sale there. He began spending less and less time at home, and sometimes he spent the income from the beans before he reached home. Meanwhile, Mercy remained at home, often with less bean income than she had before she began to adopt the ‘improvements’.

Doing right by women does right by everyone
Njuki believes that market-oriented agriculture will succeed in helping women only if it moves beyond ‘doing right for women.’ ‘We should not include gender development in agriculture to help women only; we ought to focus on women because if we do not, there will be adverse repercussions for the incomes, nutrition and empowerment not only of women but also of households, communities and countries.’

To get market-oriented agriculture to work for women, Njuki suggests the following ways of raising the often under-recognized role of women in agricultural production.

Increase women’s decision-making in agricultural projects to enable them play a role in identifying markets and commodities in specific value chains. ‘We should not push any one commodity at women to bring about change; we must first understand from them what they need.’

Work with both men and women because women live in households and communities that include their husbands, brothers and other men. ‘If we do not put money in pockets of men, we will not manage to put money in the pockets of women.’

Raise women’s assertiveness and leadership skills by linking them directly with (especially urban) consumers who buy their products so that the women producers understand at first hand how markets work and what kinds of products their clients prefer.

Encourage women to come together in groups, which give them better bargaining power to access banking and other financial services.

Increase women’s access to technologies and inputs and services to ensure that they can on-goingly adopt production practices needed to meet new and changing market needs and demands.

Njuki recommends that projects widen their indicators of success beyond just increases in women’s income. ‘We need to expand our indicators to look at the distribution of this income. We need to know which households and individuals are benefiting. We need to pay attention to labour issues.’

Finally, Njuki warns that success in work aiming to redress gender imbalances depends on a multitude of actors working together. ‘No one (woman) can whistle a symphony. It takes an orchestra to play it,’ she concluded, quoting Halford Luccock. ‘These initiatives need to be driven and replicated by many individuals and organizations working together to scale up community successes regionally.’

Working with women and men in agricultural market development: The missing link
View more presentations from ILRI CGIAR.
Read more about the ‘Gender and Market-oriented Agriculture: From Research to Action’ in the ILRI gender and agriculture blog.