Specialists at a new-age computing facility are seeking partnerships with international universities to develop world-class bioinformatics capacity in Africa – and Africa's first generation of bioinformaticians.

One of the great recent successes of African biosciences was mapping the genetic code of a parasite known as Theileria parva. This single-celled parasite is transmitted to cattle by biting ticks and causes East Coast fever, which kills a million cattle a year in 11 countries of Africa and is responsible for up to half of all deaths of calves kept by pastoralists there. Much of the work that contributed to this world-class scientific breakthrough, published in the prestigious journal Science, was undertaken in Africa by scientists at the International Livestock Research Institute (ILRI), in Nairobi, Kenya, in partnership with scientists at The Institute for Genomic Research (TIGR), based in the Maryland, USA.

Working with ILRI, scientists at TIGR first sequenced the genome of the T. parva parasite. Most of the subsequent work in annotating the sequence by identifying genes and assigning gene functions was performed by two bioinformatics specialists at ILRI— South African Etienne de Villiers and Kenyan Trushar Shah—using ILRI’s new high-performance computing facility at its Nairobi laboratories.

de Villiers, Shah and colleagues are hoping to build on this breakthrough to strengthen bioinformatics capacity in Africa. They are forming partnerships with leading universities worldwide with the aim of offering post- and under-graduate training in bioinformatics in and for Africa until African universities begin offering masters and doctoral degrees in this new discipline.

High-performance computing in and for Africa
The high-performance computing facility on ILRI’s campus in Nairobi provides local scientists with access to state-of-the-art technologies to enable them to conduct extensive and large-scale genomics research fast and cost-effectively for the first time. The facility has been established in Nairobi to serve the bioinformatics needs of ILRI and the eastern and central African scientific community. It is being managed as a shared facility by a new regional science platform called ‘Biosciences eastern and central Africa’ (BecA), whose hub is at ILRI’s Nairobi laboratories.

Etienne de Villiers explains that, ‘Exploitation of the latest genome technologies requires scientists skilled in bioinformatics and with access to high-performance computing infrastructure. The strategy behind high-performance computing is “divide and conquer”. Dividing a complex problem into smaller component tasks, that can be worked on simultaneously by computer, saves time, physical and human resources and money.

‘Bioinformatics is a relatively new specialist area. We need to raise awareness of the field here in Africa and expose people to its potential. The West has spent millions of dollars sequencing the genomes of humans, animals, plants and parasites and the resulting data are freely available on the internet. This is a vast body of knowledge that local scientists can use to solve their specific problems or to answer research questions. All scientists in Africa need to make use of these data are a computer, good internet access and bioinformatics skills.’

Raising awareness and building capacity in Africa
ILRI/BecA training courses and research projects are already taking advantage of the high-performance computing facility, which was commissioned in January 2005. In association with the Swedish University of Agricultural Sciences and the Linnaeus Centre for Bioinformatics, in Uppsala, Sweden, ILRI and BecA recently ran a three-day training workshop that introduced 30 scientists and students from eastern and central Africa to the field of bioinformatics.

BecA scientist Trushar Shah says that ‘bioinformatics is a new and dynamic field that young African scientists should be getting involved in, whether as a specialist or a user exploiting the technology to help answer a complex research question. Our recent short training course was very successful and we are organizing a further course in April 2007.’ 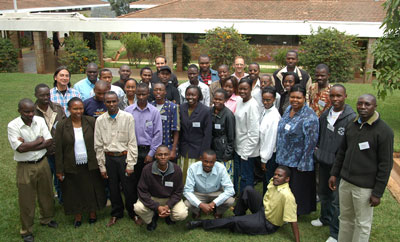 Home grown strategies and interim partnerships
de Villiers is an advocate of home-grown strategies that take into consideration local needs to build capacity in Africa. ‘One of our primary goals is to grow the number and competence of bioinformatics developers and users in the east and central Africa region. To do that, we have to be responsive to local needs. We are raising awareness of the importance and utility of bioinformatics, providing introductory training for early-career scientists, and giving skilled bioinformaticians in the region ready access to advanced tools, support and expertise. We are also considering the longer term and how best we can contribute to building bioinformatics skills and expertise throughout Africa.

‘We are also planning to link up with universities and institutes that can host these students for a few months so they can gain practical experience in the applications of bioinformatics. This way we are also training future local trainers.’

de Villiers was recently made Extraordinary Lecturer at the Bioinformatics and Computational Biology Unit of Pretoria University, in South Africa. This appointment enables him to supervise students from eastern and central Africa who are affiliated with the high-performance computing facility and wish to pursue higher degrees in bioinformatics through Pretoria University.