'If the herds die, then the people will die too.'
– Proverb in the Horn of Africa 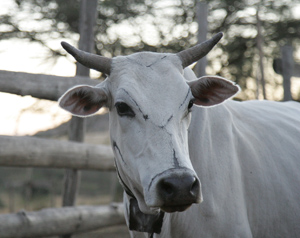 Cattle have been getting some bad press lately. Western editorials report the consumption of too much fatty red meat leading to increased heart disease, the inefficient use of grain as feed for livestock and the production of methane gases by cattle, a factor in global warming.

Elsewhere in the world, cattle receive songs of praise. The songs are as old as civilization, when women and men first began to husband resources against the dry season, against winter, against unpredictable floods and drought. Farmers in the tropics and subtropics, where agricultural resources are scarce, face special hardships. Cattle help them survive those hardships. In the vast arid and semi-arid regions of the tropics, cattle and other ruminant animals offer people their only livelihood.

For most people in the developing world, cattle are not a product. They are life supporting. And they are cherished for that.

East African pastoralists sing praises to Maasai and Boran cattle superbly adapted to drought, heat stress and inferior fodder. West African savannah herdsmen depend on disease-resistant N’Dama and the lyre-horned White Fulani. The Hindu revere the large, prominently humped zebu cattle and the long-horned Mysore of southern India, a breed famous for its endurance. In Indonesia, handsome red Bali cattle serve as draught and riding animals that thrive on poor food, subsist on salty water and resist ticks and disease.

Why Cattle Matter
Livestock are not the most important factor in developing world agriculture. People are. But the survival of many farmers and pastoralists in poor countries depends on their stock. The thousand-plus cattle breeds developed over the millennia have, like their owners, adapted themselves to harsh and extreme climates, have evolved resistance to endemic diseases, and have developed an ability to survive on little water and poor-quality, seasonal food.

On typical subsistence farms where both crops and livestock are raised, cattle are the only means of power — other than human muscle — for pulling ploughs and taking produce to market. Cattle in poor countries eat grass and browse and crop wastes rather than grain. Their dung is used as fuel, as building material, as fertilizer. Their milk is a main source of protein for children. Surplus milk and young stock and hides are sold to buy clothes and seed, to pay medical expenses and school fees.

For pastoral peoples who live in areas too dry for arable farming, cattle are much more. They are not only food (milk is a mainstay of the nomadic diet) and money (milk is exchanged for vegetables, salt and cloth; animals are given as bride price), they are also a final insurance against disaster, when they are sold to buy available grain when no other food is left.

For traditional farmers and herdsmen around the world, an animal’s most essential quality is its ability to survive. In Somalia, where stock-keeping is the economic backbone of the country, the typical zebu animal is the Garre of the central regions, a medium-sized, red-coated, multi-purpose animal. By the standards of developed nations, the productivity of these cattle is modest; what is too often forgotten in the West is that such animals are remarkably efficient producers in a harsh environment that makes most other agricultural activity impossible.

For the people of Somalia, there is a great deal more to cattle than milk, meat or even profit, even in times less dire than those today. PH Gulliver writes in The Family Herds: ‘Cattle are a man’s dearest possession and almost the only store of value he knows. Without them, his “social” life would be impossible. In his use and disposal of stock he is able, in a most definite way, to express his relations to others. One who is related is ipso facto one who gives and is given animals, for this not only expresses mutual confidence and affection’ but also ‘a genuine co-operation in each other’s life and development’.

More than 65% of Somalia’s population is involved in the livestock industry, with over half the population being nomads whose livestock produce over one million tons of milk a year. But livestock mean even more than livelihoods and food in this country: livestock are also Somalia’s largest traded commodity, accounting for 80% of exports in normal years.

In past years, 300,000 people died of starvation in Somalia and one-half of the country’s cattle died from drought, disease and war. To rebuild the country's economic and social infrastructures, livestock as well as people have to be saved.

Aid organizations know this. The International Committee of the Red Cross, for example, has committed millions of dollars to improving veterinary care in Somalia. Red Cross staff ask people, with considerable success, to bring their livestock to rural centres to be treated against major parasitic diseases. The makeshift veterinary centres soon became central to human as well as animal care, with medics jabbing young children with vaccines while the family animal stock is similarly treated.

A child dying is a family tragedy. An animal dying can threaten the survival of the whole family. As a proverb in the Horn of Africa goes: ‘If the herds die, then the people will die too.’

Germeda Koro agrees. Koro is a nomadic herder in the village of Gode, in the Somali Region of southern Ethiopia, where failure of rains in 2008 dried up food resources and water wells and wiped out pastures.

When asked by Time Magazine reporter Alex Perry why the villagers hadn’t slaughtered the goats, cows and chickens he saw roaming the village to save the children dying of hunger and disease, Koro, who had two children being treated for malnutrition, responded: ‘“Look, maybe one or two children get sick. But if you kill your animals, you’re ruining the whole family.” In the absence of billions more dollars for long-term development, that is what planning looks like in Ethiopia today. Letting a child die to save a family.’ (Time Magazine, ‘The Cost of Giving’, 18 August 2008)

Views
The view from the North and the South—from the feedlots of Chicago and the semi-desert scrublands of Somalia and Ethiopia, from those who eat too much protein and those who eat too little—is very different. When advocating policies that affect the developing world, we should exploit and build on the enduring relationship of people and cattle that has benefited both species for thousands of years. If we respect other peoples’ ways of life that are born of necessities now remote in the developed world, we will make development policies that profit rather than hurt the farmers and agricultural economies we are attempting to support.

1 thought on “Songs of praise”