Livestock could be critical to survival of African Agriculture as hotter weather and rainfall patterns shift, says new study 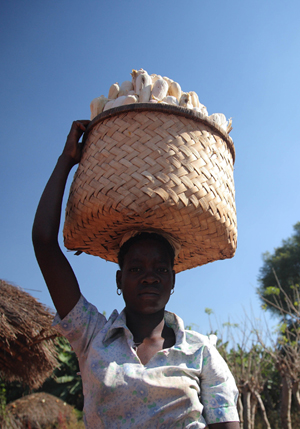 A new study by researchers from the Nairobi-based International Livestock Research Institute (ILRI) and the United Kingdomâ€™s Waen Associates has found that by 2050, hotter conditions, coupled with shifting rainfall patterns, could make anywhere from 500,000 to one million square kilometers of marginal African farmland no longer able to support even a subsistence level of food crops. However, the land, on which some 20 to 35 million people currently live, may still support livestock.

Boosting livestock production could be an attractive alternative for millions of poor farmers across Africa who, in the coming decades, could find that climate change has rendered their lands unsuitable for crop cultivation yet still viable for raising animals, according to the study that appears this week in a special edition of the journal Environmental Science and Policy.

â€œLivestock, particularly animals that are known to be tolerant of heat and drought, can survive in conditions that are far more severe than what crops can tolerate,â€ said Philip Thornton, an ILRI scientist and one of the paperâ€™s co-authors. â€œLivestock can provide poor households with a buffer against the risk of climate change and, allow them to take advantage of the increasing demand for animal products in Africa.”

â€œAny increase in livestock must be managed sustainably,â€ said Carlos SerÃ©, Director General of ILRI, which is one of 15 research centers supported by the Consultative Group on International Agricultural Research (CGIAR). â€œBut our research shows there are many areas in Africa where over the next few decades climate vulnerability coupled with market demand for animal products will prompt many farming communities to add more livestock to their agriculture systems and we should prepare now for this inevitability. â€

The analysis is part of a range of studies published in the journal that emerged from an April 2008 conference at Oxford University on food security and environmental change. The publication coincides with a meeting this week in Bonn in which experts from around the world will consider how a new global accord on climate change can offer adaptation strategies for the rural poor.

Thornton and his colleague, Peter Jones of Waen Associates in the UK, sought to identify farm-dependent areas of Africa that might be most vulnerable to the effects of climate change. They focused on what are considered â€œmarginal lands,â€ arid and semi-arid regions of West, East and southern Africa where, for example, scant precipitation already routinely causes crops to fail in one out of every six (or fewer) growing seasons.

The researchers then considered the impact of climate change in these regions and found that even in situations where climate change is moderated somewhat by global reductions in carbon emissions, a large number of farmers most likely will still face a considerable deterioration in growing conditions. The key measure was whether climate change under two widely used climate modelsâ€”which offer projections based on high and low greenhouse-gas emission scenariosâ€”would cause the number of â€œreliable crop growing daysâ€ to drop below 90 days between 2000 and 2050. 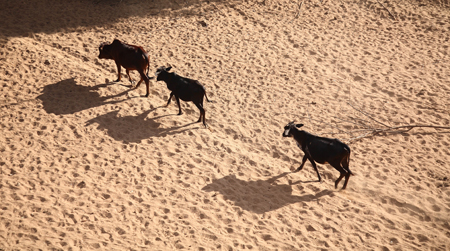 They concluded that under scenarios in which carbon emissions remain high, the number of reliable growing days would drop below 90 for almost one million square kilometers of marginal growing lands in Africa. Assuming a â€œlower emission scenario,â€ they project about 500,000 square kilometers would fail to reach the 90-day mark.

The researchers warn that if reliable growing periods drop below 90 days in these areas, â€œmaize cultivation, already marginal, will basically no longer be possible as a normal agricultural activity.â€ They continue, saying that in some places, rain could become so scarce that â€œeven the drought-tolerant crops such as milletâ€ will be difficult to grow. They say that in these conditions, livestock could be the key to keeping food on the table and for earning income as well.

In particular, according to the study, livestock could provide a significant income boost for farmers trying to survive on marginal lands that are within a dayâ€™s travel time of one of Africaâ€™s urban populations, where a growing demand for meat and dairy products could provide lucrative markets.

Thornton and Jones pointed out that looking to livestock as a bulwark against challenging climates is not a novel idea. They note that across Africa â€œlivestock have proven to be a crucial coping mechanism for poor people who are trying to survive in difficult environmental conditions.â€

Thornton said the goal of the research is ultimately to use climate change projections to pinpoint specific areas in Africaâ€”each of which may be relatively small in sizeâ€”where it is appropriate to promote livestock ownership on small-holder farms and to help farmers deal with the risks inherent in such operations. But he said employing this kind of research to direct policy decisions would benefit greatly from obtaining better data at the local level,
including data projecting what local temperatures and rainfall patterns may look like in the future.

However, he and Jones acknowledge that â€œthere is currently a mismatch between the kind of localised climate change impact information that is urgently needed, and what can objectively be supplied.â€

For example, even at large, regional levels, while there is consensus that temperatures will rise significantly, different climate models don’t always agree as to how climate change may affect rainfall amounts and patterns in some parts of Africa. But they said investments in generating such details are warranted given the potential to bring new levels of precision and efficiency to aid programs focused on alleviating poverty among the rural poor in Africa, most of whom depend on small holder farms for food and income.

The researchers also observe that better data will inevitably show what some may be reluctant to see, but which must be confronted nonetheless: that in certain parts of Africa where growing conditions already are difficult, there are simply limits to what can be done to help farmers adapt to climate change. Harsh reality though it may be, Thornton and Jones said it is important for development agencies and governments alike to understand that as climate conditions become more inhospitable to agriculture in some places, there may be â€œa point at which households and farming systems become so stressed that there are few alternatives to an exit from farming.â€