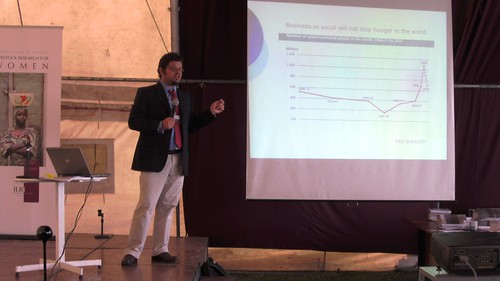 Watch the whole of this filmed slide presentation by ILRI’s Mario Herrero on ILRI’s film channel: The future of livestock in feeding the world (duration: 28 minutes, 25 Nov 2011).

On 9 and 10 November 2011, the ILRI Board of Trustees hosted a 2‐day ‘liveSTOCK Exchange’ to discuss and reflect on livestock research for development. ILRI systems analyst Mario Herrero gave a keynote presentation titled ‘Global Livestock: Drivers, Trends and Futures’. What follows are highlights of the first half of his talk.

We need to feed 9–10 billion people by 2050 and we need to do so at a far lower environmental cost, basically with the same amount of land and less greenhouse gas emissions and water and nutrient use and at the same time in socially and economically acceptable ways.

Food systems have been changing and they’re likely to change even more as our population increases. So the target is moving.

Livestock systems are in transition
The drivers and trends playing key roles in these changes include: the increasing human population, the ‘livestock revolution (as people get richer in emerging economies, they consume more animal products), and an unprecedented movement of people to cities.

The demand for livestock products to 2050 is going to be enormous. Total consumption is likely to be 2.5 times more than what we’ve experienced in the last decades. Just image the resource-use implications of producing all this meat and milk.

What are people eating and how are we going to produce all the new feed and food needed?
People want chicken, pork and milk; these are the livestock foods growing at the fastest rates across the world. We need to see how we can increase our efficiencies in use of fresh water, 70% of which is used for agriculture. How do we increase efficiency gains of water use in the livestock sector?

Reality check
Food prices have been decreasing until recently. It’s likely that the increasing food prices, which severely affcct the poor, will keep on increasing. We need to be able to plan how to adjust our agricultural systems to produce more food and dampen those prices and do this without incurring a big environmental cost.

The livestock ‘balancing act’
We know that keeping livestock has many advantages—they are an important source of nutrition, especially for poor people; they generate great incomes (the value of production of livestock is in many cases far higher than that for crops); and they help poor people to manage risks; they help maintain productive landscapes; and they are raised on many lands unsuitable for other kinds of food production.

Of course, on the other hand, livestock are inherently inefficient users of land; they are large users of natural resources; they are polluters in places; they produce a significant amount of greenhouse gases; and they are an important vector for human diseases.

What is key is realizing that livestock systems differ greatly by region and circumstance. We need a nuanced understanding of how this livestock ‘balancing act’ plays out in different parts of the world. . . .

Watch the whole of this filmed slide presentation by ILRI’s Mario Herrero on ILRI’s film channel: The future of livestock in feeding the world, duration: 28 minutes, 25 Nov 2011.

The liveSTOCK Exchange also marked the leadership and contributions of Dr. Carlos Seré as ILRI Director General.  See all posts in this series / Sign up for email alerts

1 thought on “Seminal and holistic review of the probable ‘futures’ of livestock production, food security and environmental protection”