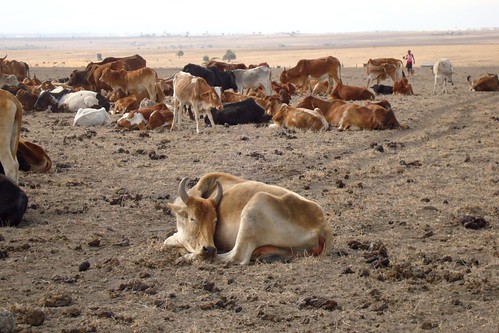 Stories of the two-year drought biting deep in pastoral lands in the Horn of Africa are heartbreaking. Kenya’s livestock herders are being hit particularly hard. More than three-quarters of Kenya comprises arid and semi-arid lands too dry for growing crops of any kind. Only pastoral tribes, able to eke out a living by raising livestock on common grasslands, can make a living for themselves and their families here, where rainfall is destiny. With changes in the climate bringing droughts every few years in this region of eastern Africa, some doubt that traditional pastoral ways of life, evolved in this region over some 12,000 years, can long survive. Climate change here is not an academic discussion but rather a matter of life and death. But pastoral knowledge of how to survive harsh climates—largely by moving animals to take advantage of common lands where the grass is growing—is needed now more than ever.

This is especially true in Africa, whose many vast drylands are expected to suffer greater extremes in climate in future. Two of the recent reports are from America’s Public Radio International (‘Drought in East Africa’: <http://www.pri.org/business/nonprofits/drought-east-africa1629.html>) and the UK’s Guardian newspaper (‘The last nomads: Drought drives Kenya’s herders to the brink’: <http://www.guardian.co.uk/world/2009/sep/13/drought-kenya-nomads>). The Guardian article tells a heart-breaking story about “pastoral dropouts”, a story that may mark “not simply the end . . . of generations of nomadic existence in the isolated lands where Kenya meets Somalia and Ethiopia, but the imminent collapse of a whole way of life that has been destroyed by an unprecedented decade of successive droughts”.

The article says this region has experienced three serious droughts in the last decade, when formerly a drought occurred every 9 to 12 years. This change in global weather patterns ‘has been whittling away at the nomads’ capacity to restock with animals—to replenish and survive—normally a period of about three years”. The Economist in its 19 September 2009 edition says global warming is creating a ‘bad climate for development’ (<http://www.economist.com/world/international/displaystory.cfm?story_id=14447171>). The article says that poor countries’ economic development will contribute to climate change—but they are already its victims. ‘Most people in the West know that the poor world contributes to climate change, though the scale of its contribution still comes as a surprise. Poor and middle-income countries already account for just over half of total carbon emissions (see chart 1); Brazil produces more CO2 per head than Germany. The lifetime emissions from these countries’ planned power stations would match the world’s entire industrial pollution since 1850.

‘Less often realised, though, is that global warming does far more damage to poor countries than they do to the climate. In a report in 2006 Nicholas (now Lord) Stern calculated that a 2°C rise in global temperature cost about 1% of world GDP. But the World Bank, in its new World Development Report <http://www.economist.com/world/international/displaystory.cfm?story_id=14447171#footnote1> , now says the cost to Africa will be more like 4% of GDP and to India, 5%. Even if environmental costs were distributed equally to every person on earth, developing countries would still bear 80% of the burden (because they account for 80% of world population). As it is, they bear an even greater share, though their citizens’ carbon footprints are much smaller . . . . ‘The poor are more vulnerable than the rich for several reasons. Flimsy housing, poor health and inadequate health care mean that natural disasters of all kinds hurt them more. ‘The biggest vulnerability is that the weather gravely affects developing countries’ main economic activities—such as farming and tourism. Global warming dries out farmland. Since two-thirds of Africa is desert or arid, the continent is heavily exposed. One study predicts that by 2080 as much as a fifth of Africa’s farmland will be severely stressed.’

The International Livestock Research Institute (ILRI) and its local and international partners are working to help pastoral communities in this region increase their resilience in the face of the current drought, as well as population growth, climate change, and other big changes affecting pastoral ways of life.