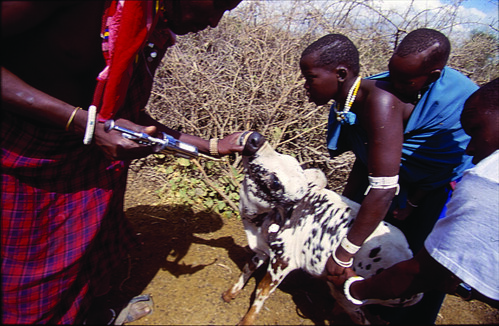 Millions of African families could be saved from destitution thanks to a much-needed vaccine that is being mass-produced in a drive to protect cattle against a deadly parasite.

East Coast fever is a tick-transmitted disease that kills one cow every 30 seconds – with one million a year dying of the disease.

Calves are particularly susceptible to the disease. In herds kept by the pastoral Maasai people, for example, the disease kills from 20 to over 50 per cent of all unvaccinated calves. This makes it difficult and often impossible for the herders to plan for the future, to improve their livestock enterprises and thus to raise their standard of living.

An experimental vaccine against East Coast fever was first developed more than 30 years ago. This has been followed by work to allow the vaccine to be produced on a large scale, with major funding from the UK Department for International Development (DFID) and others.

The immunization procedure – called “infection-and-treatment” because the animals are infected with whole parasites while being treated with antibiotics to stop development of disease – has proved highly effective. However, initial stocks produced in the 1990s recently ran low.

The International Livestock Research Institute (ILRI), at the request of the Africa Union/Interafrican Bureau for Animal Resources and chief veterinary officers in affected countries, produced one million doses of vaccine to fill this gap. However, for the longer term it is critical that sustainable commercial systems for vaccine production, distribution and delivery are established.

With UK£16.5 million provided by DFID and the Bill & Melinda Gates Foundation, the charity GALVmed is fostering innovative commercial means to do just this, beginning with the registration and commercial distribution and delivery of this new batch of the vaccine. This will ensure that the vaccine is made available, accessible and affordable to livestock keepers who need it most and to scale up its production for the future.

International Development Minister Mike Foster said:
“Some 1.3 billion of the world's poorest people rely on livestock for their livelihoods. Many Africans depend on the health of their cattle for milk, meat and as their only hard asset for trade and investment. A smallholder dairy farmer can take years to recover economically from the death of a single milking cow. That’s why it’s vital that every possible step is taken to ensure that these essential vaccine doses are sustainably produced, tested and made available to the people who need them.

“DFID is supporting GALVmed to explore ways of transferring the production and distribution of the vaccine into the private sector through local manufacturers and distributors. This is extremely important in making the vaccine affordable, accessible and – crucially – sustainable.”

GALVmed CEO Steve Sloan said:
“Funded by DFID and the Bill & Melinda Gates Foundation, GALVmed is working to protect livestock and the livelihoods of their owners. Thanks to the highly effective East Coast fever vaccine developed over many years by researchers working in East Africa and then refined and mass produced by ILRI, cattle invaluable to pastoralists such as the Maasai as well as smallholder dairy farmers are being protected.
“The survival of cattle for the millions who live on tiny margins has a direct effect on quality of life and the dignity of choice and self-determination. Collaborating with ILRI and partners in the developing world, including governments and veterinary distributors and those from the private sector, GALVmed is working to embed the vaccine through registration in East African countries and to scale up its production so that it remains accessible to poor people.
“This pioneering registration effort aims to ensure that the vaccine is approved and monitored by affected nations and enables local firms to sell and distribute it, embedding its sustainability. Registration in Malawi is already complete, with significant progress in Tanzania, Kenya and Uganda.”
ILRI veterinary scientist Henry Kiara, who has conducted research on the live vaccine for 20 years, explains that ILRI is “looking forward to commercialising the production, distribution and delivery of the vaccine to the smallholder and emerging dairy producers as well as livestock herders” in this region of Africa. “Now that all the building blocks are in place, thanks to past investments by DFID and others”, he says, “we are excited to be at a stage where this vaccine can ‘take off’.”

Over the past several years, the field logistics involved in mass vaccinations of cattle with the infection-and-treatment method have been greatly improved, due largely to the work of a private Company called VetAgro Tanzania Ltd, working with Maasai cattle herders in northern Tanzania. Sustainability underpins GALVmed’s approach and the charity is working with developing world partners to ensure that the vaccine is available to those who need it most, bringing public and private partners together.


About the vaccine
The infection-and-treatment immunisation method against East Coast fever was developed by research conducted over three decades by the East African Community, the Kenya Agricultural Research Institute (KARI) at Muguga, Kenya (www.kari.org), and the International Livestock Research Institute (ILRI), in Nairobi, Kenya (www.ilri.org). This long-term research was funded by the UK Department for International Development (DFID) (www.dfid.gov.uk) and other donors of the Consultative Group on International Agricultural Research (CGIAR) (www.cgiar.org). The first bulk batch of the vaccine, produced by ILRI 15 years ago, has protected one million animals, whose survival raised the standard of living for livestock keepers and their families. Field trials of the new vaccine batch, also produced at ILRI, are being completed in accordance with international standards to ensure that it is safe and effective.

About East Coast fever
East Coast fever was first recognized in southern Africa when it was introduced at the beginning of the twentieth century with cattle imported from eastern Africa, where the disease had been endemic for centuries. It caused dramatic losses with high cattle mortality. It has persisted in 11 countries in eastern, central and southern Africa – Burundi, Democratic Republic of Congo, Kenya, Malawi, Mozambique, Rwanda, Sudan, Tanzania, Uganda, Zambia and Zimbabwe. The disease devastates the livelihoods of small-scale mixed crop-and-livestock farmers and smallholder and emerging dairy producers, as well as pastoral livestock herders, such as the Maasai in East Africa.

East Coast fever, or theileriosis, is a devastating cancer-like disease of cattle that often kills the animals within three weeks of infection. It is caused by the single-celled parasite Theileria parva, which is transmitted by the brown ear tick (Rhipicephalus appendiculatus) as it feeds on cattle. In addition to producing the infection-and-treatment vaccine, ILRI is also working to develop a genetically engineered next-generation vaccine.

Some 70 per cent of the human population of sub-Saharan Africa – around half a billion people – depend on livestock for their livelihoods, with farming and herding families relying on cattle for vital sources of food, income, traction, transportation and manure to fertilise croplands.

Case Study: East Coast fever in Tanzania
Maasai herders in Tanzania have been particularly devastated by East Coast fever. In parts of northern Tanzania, more than 1 in 5 calves die before reaching maturity (54 months) in the lowlands and more than one third fail to reach maturity in the (wetter) highlands, where tick-borne and other diseases are more prevalent.

Although the infection-and-treatment vaccine is a “live” vaccine, and thus needs to be stored in liquid nitrogen and administered by skilled practitioners, after which the animals must be monitored by experts for several days, the Maasai here are desperate for the new batch to be ready.

Introduction of the previous batch in recent years has drastically reduced calf mortality, from up to 80 per cent to less than 2 per cent. The protection afforded by the vaccine is so good that Maasai herders are willing to pay for these vaccinations. The vaccine appears to protect the animals against other ailments as well and, in addition, those mature animals that are marked with ear tags as having been vaccinated are fetching up to 50 per cent higher prices in the market. The vaccine is allowing these cattle herders to sell more animals and to invest their new income in, for example, bettering their household diets or paying for their children’s education. The new access to this vaccine is facilitating a transition among the Maasai in herd management, from a subsistence- to a market-orientation.

GALVmed has regular contact with those on the ground to improve access to the vaccine, including a meeting with 25 Masaai livestock keepers in Arusha, in northern Tanzania, earlier this year. At that meeting a Masaai representative stated:

“Please thank all those people who made the vaccine and also those who make it available for us to buy. Tell them not to stop their good work. No cattle means no Maasai – and no East Coast fever vaccine means no cattle.”