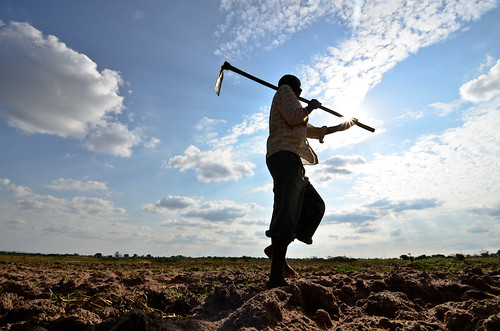 Farming in eastern Africa (photo on Flickr by CIAT/Neil Palmer).

The story of human settlement and human evolution is very much tied to the fact that the earth’s climate has always been changing, and will continue to do so.

So begins a new brief developed by agricultural systems and climate change scientist Philip Thornton and his colleagues at the International Livestock Research Institute (ILRI), based in Nairobi, Kenya.

The brief goes on to say the following.

What is known about the likely impacts of climate change on resource-poor livestock keepers in the developing world? Relatively little, and the International Livestock Research Institute (ILRI) and the CGIAR Research Program on Climate Change, Agriculture and Food Security (CCAFS) are working to improve this knowledge.

‘This Brief outlines how a group of scientists at ILRI reviewed some elements of the complex relationship between livestock and climate change in developing countries with a forward-looking approach. The objective was to help set research priorities: to inform the debate as to what research for development organizations such as ILRI could and should be doing in the area of climate change work that could add value to the large amounts of work already being carried out by the Global Change community on cropping systems and natural resources management. . . .

Resource-poor livestock keepers: Mitigate and adapt
‘Changes in climate and climate variability will affect livestock production systems in all parts of the world, and will inevitably impact the 1.3 billion poor people whose livelihoods are wholly or partially dependent on livestock. At the same time, livestock production is a major contributor to greenhouse gas emissions.

Therefore, livestock keepers will have to mitigate emissions as well as adapt to change.

‘In developed countries, livestock systems are generally adaptable and resilient. In developing countries, in contrast, households that are dependent on livestock keeping may be much more vulnerable to changes in climate and climate variability, with the potential for increased poverty and decreased food security. At the same time, there may be considerable growth potential in the smallholder livestock sector, given projected increases in demand for livestock products globally and for biofuels and the land-use changes these may bring about. . . .

‘No formal evaluation has been undertaken, but this work certainly had some impact in addressing the lack of information on livestock in several integrated global assessments, despite livestock’s being recognized as one of the major drivers of global change. New partnerships have been forged with others working in the realm of global assessment. . . .

Way forward
‘[T]here is a need for improvement in the kind of indicators that are produced to gauge changes in social factors. Currently, impacts are usually expressed in terms of available calories and prices, for example, but there may be many other critical factors to assess future changes beyond food availability and commodity prices. Second . . . [is] the need to undertake priority-setting analyses on a regular basis, linked with other types of foresight and scenario processes . . . [and] explicitly linking priority setting with monitoring and evaluation, to provide more coordinated planning and implementation of research for development to improve its influence and to better demonstrate its value to the resource-poor of the developing world.’

Read the whole brief: Climate change: Do we know how it will affect smallholder livestock farmers? by Philip Thornton, Jeannette van de Steeg, An Notenbaert and Mario Herrero, a GFAR ‘The Futures of Agriculture’ Brief No. 43, May 2013.

This brief is based on two publications by ILRI scientists:
(1) Thornton P K, Notenbaert A, van de Steeg J and Herrero M, 2008, The livestock-climate-poverty nexus: A discussion paper on ILRI research in relation to climate change, published by ILRI, Nairobi, Kenya, 80 pp.

(2) Thornton P K, van de Steeg J, Notenbaert A and Herrero M, 2009. The impacts of climate change on livestock and livestock systems in developing countries: A review of what we know and what we need to know, Agricultural Systems 101: 113–127.

Note
This brief series was developed in preparation for the Foresight Breakout Session of the Global Conference on Agricultural Research for Development (GCARD 2012) and the Global Foresight Hub. The briefs were written to communicate to a wider audience, such as policy makers, civil society organizations, researchers, and funders.