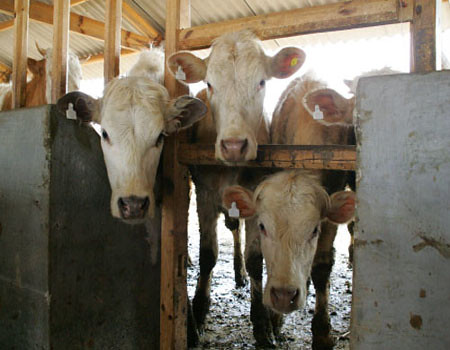 A new study by the International Livestock Research Institute (ILRI) finds reductions in greenhouse gasses could be worth a billion dollars to poor livestock farmers if they could sell saved carbon on international markets.

Greenhouse gas emissions caused by livestock operations in tropical countries—a major contributor to climate change—could be cut significantly by changing diets and breeds and improving degraded lands, according to a new study published today in the U.S. Proceedings of the National Academy of Sciences. And as an added bonus, scientists found the small changes in production practices could provide a big payoff by providing poor farmers with up to US$1.3 billion annually in payments for carbon offsets.

'These technologically straightforward steps in livestock management could have a meaningful effect on greenhouse gas build-up, while simultaneously generating income for poor farmers,' said Philip Thornton, of ILRI, who co-authored the paper with ILRI’s Mario Herrero.

Livestock enterprises contribute about 18% of the world’s greenhouse gases, largely through deforestation to make room for livestock grazing and feed crops, the methane ruminant animals give off, and the nitrous oxide emitted by manure. Many worry these greenhouse gas emissions could grow due to increased livestock production to meet surging demand for meat and milk in developing countries.

Thornton and Herrero believe there are options readily available to prevent up to 417 million tons of carbon dioxide expected to be produced by livestock in tropical countries by 2030—a sum representing a savings of about 7% of all livestock-related global greenhouse gas emissions.

'Of course,' says Thornton, 'if we also manage to bring down consumption of meat and milk in rich countries, the amount of carbon saved will be even greater.' The difference between livestock production in rich and poor countries is a big concern to Thornton. 'We conducted this study to try to disentangle some of the complexities surrounding livestock systems, particularly those in developing countries. Livestock systems are not all the same, and there are large differences in their carbon footprint, their importance for the poor, and their mitigation potential.'

Most reductions of livestock-produced greenhouse gases would have to come from the more than half a billion livestock keepers in tropical countries. But the study finds that these struggling farmers could be motivated to adopt more climate-friendly practices.

'It would be a useful incentive if these farmers were allowed to sell the reductions they achieve as credits on global carbon markets,' Thornton said. 'We found that at US$20 per ton—which is what carbon was trading for last week on the European Climate Exchange—poor livestock keepers in tropical countries could generate about US$1.3 billion each year in carbon revenues.' Although carbon payments would not amount to a lot more income for each individual farmer (such payments might represent an increase in individual income of up to 15%), such payments should provide a tipping point for many smallholders considering intensifying their livestock production.

According to the ILRI study, livestock-related greenhouse gas reductions could be quickly achieved in tropical countries by modifying production practices, such as switching to more nutritious pasture grasses, supplementing diets with even small amounts of crop residues or grains, restoring degraded grazing lands, planting trees that both trap carbon and produce leaves that cows can eat, and adopting more productive breeds.

'We wanted to consider the impact in tropical countries because they are at the epicentre of a livestock revolution,' said Herrero. 'We expect consumption of milk and meat to roughly double in the developing world by 2050, which means it’s critical to adopt sustainable approaches now that contain and reduce the negative effects of livestock production, while allowing countries to realize the benefits, such as better nutrition and higher incomes for livestock-producing households.'

Herrero and Thornton said that changing diets and breeds could increase the amount of milk and meat produced by individual animals, thus reducing emissions because farmers would require fewer animals. For example, in Latin America, they note that switching cows from natural grasslands to pastures sown with a more nutritious grass called Brachiaria can increase daily milk production and weight gain by up to three-fold. This increase, they said, means fewer animals are needed to satisfy demand. In addition, Brachiaria also absorbs, or 'sequesters,' more carbon than degraded natural grasslands.

'Even if only about 30% of livestock owners in the region switch from natural grass to Brachiaria, which is what we consider a plausible adoption rate, that alone could reduce carbon dioxide emissions by about 30 million tons per year,' Thornton said.

Herrero and Thornton also said that, for a given level of demand, fewer animals would be needed if more farmers supplemented grazing with feed consisting of crop residues (often called 'stover'), such as the leaves and stalks of sorghum or maize plants, or with grains. In addition, they note there is the potential to boost production per animal by crossbreeding local with genetically improved breeds, the latter of which can provide more milk and meat than traditional breeds while emitting less methane per kilo of meat or milk produced.

Planting trees that have agricultural and feed uses, a practice known as 'agroforestry,' has the benefit of reducing feed costs for animals, while the trees themselves absorb carbon. Herrero and Thornton found that of the 33 million tons of carbon dioxide that could be reduced through wider use of agroforestry in livestock operations, almost two-thirds of it—72%—would come from the 'carbon sequestration' effects of the trees.

Carols Seré, ILRI’s Director General, said Thornton and Herrero’s work usefully steers the discussion of livestock’s contribution to climate change from blunt criticism of the impact of farm animals to meaningful efforts to address the environmental consequences of their increased production.

'There is a tendency today to simply demonize livestock as a cause of climate change without considering their importance, particularly for poor farmers in the developing world,' Seré said.

'Most of the farmers we work with have a relatively small environmental footprint,' he added, 'and they are intensely dependent on their animals for food, for income, and even as "engines" to plough their fields and transport their crops. What these farmers need are technological options and economic incentives that help them intensify their production in sustainable ways. Carbon payments would be a welcome additional incentive inducing such changes in smallholder livestock production.'

Key messages from the publication
(1) The impact of any given livestock intervention on mitigating total greenhouse gas emissions will be small.
To make a difference, we will need to implement many interventions and do so simultaneously. Mitigating the impacts of livestock systems on climate change will require taking a series of small incremental steps and implementing a wide range of different mitigation strategies to reduce carbon dioxide, methane and nitrous oxide emissions.

(2) We should aim for fewer, better fed, farm and herd animals.
Apart from strategies to sequester greater amounts of carbon, all strategies for mitigating greenhouse gases appear to require the intensification of animal diets and a reduction in animal numbers to produce the same volume of meat and milk.

(3) Ways to mitigate greenhouse gases in tropical livestock systems are technologically straightforward.
Apart from strategies to sequester carbon, all strategies for mitigating greenhouse gas emissions tested could be implemented at farm level with the appropriate economic and other incentives for resource-poor farmers.

(4) GHG mitigation strategies can be pro-poor.
Paying small-scale livestock farmers and herders for practices that help sequester carbon (under REDD or similar incentive schemes), although not trivial in management terms, would help smallholders generate greater and more diversified incomes.

(6) All strategies will need to include appropriate incentives for smallholders.
A major incentive for small-scale livestock producers to change their production practices will be the increasing demand for livestock products in developing countries. But many smallholders will also need other economic incentives and more user-friendly technologies in order to make even straightforward changes in their production practices.

Read the whole paper at the Proceedings of the National Academy of Sciences: The potential for reduced methane and carbon dioxide emissions from livestock and pasture management in the tropics, 6 September 2010.