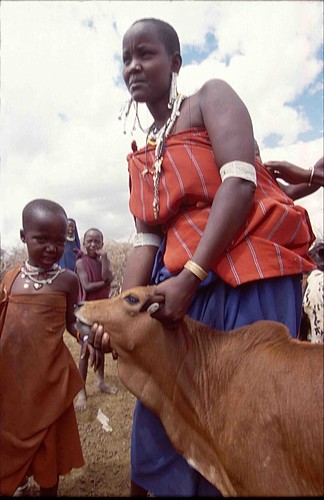 A Maasai woman from northern Tanzania holds one of her calves she has paid to have immunized against East Coast fever (picture credit: ILRI/Mann).

A new discussion paper on Livestock and Women’s Livelihoods: A Review of the Recent Evidence has just been published by a group at the International Livestock Research Institute (ILRI) led by agricultural economist Patti Kristjanson.

This paper synthesizes evidence of the contributions that livestock make to the livelihoods of poor women in sub-Saharan Africa and South Asia and identifies factors that enhance or constrain livestock-related opportunities for women. The scientists apply a gender lens to three livestock-related pathways out of poverty—securing livestock assets; increasing livestock productivity; and enhancing participation in livestock markets. For each pathway, the authors summarize what is known and what this knowledge implies for programmatic and policy interventions.

Assembling this information, say the authors, 'is a first step towards identifying some of the large gaps in our evidence base as well as some indications of the kinds of research and development interventions, made in relation to which species and value chains, that appear most likely to benefit poor women and their families.'

The following is the introduction to this paper.

'After several years of relative neglect, livestock in livelihood studies are in the limelight, as the realization dawns—once again—that livestock are important for livelihoods and have significant potential for poverty alleviation, often in areas where few other options exist of the 2010. However, there is also an increasing awareness that certain types of livestock systems are associated with important downsides such as environmental degradation, greenhouse gas emissions, zoonotic and emerging infectious diseases, or food-borne illnesses. There is a need to balance these positive and negative aspects as is made clear by the title of the recent State of Food and Agriculture (SOFA) report ‘Livestock in the balance’ (FAO 2009). Gender will be central to achieving this balance.

'Livestock are important in women’s livelihoods and asset portfolios. The fact that past livestock interventions appeared to not benefit women led to the inception of considerable research on gender and livestock systems in the 1980s and 1990s. As a result, subsequent livestock development projects became better targeted, focusing on species (poultry, small ruminants, dairy cows) and using approaches (participatory, group-based) that make them, at least in theory, more appropriate for and accessible to women.

'This is now an appropriate time to review past and current research on gender and livestock in order to identify pertinent issues and knowledge gaps for the livestock R4D agenda in coming decades.

'Although two-thirds of the world’s 600 million poor livestock keepers are rural women . . ., little research has been conducted in recent years on rural women’s roles in livestock keeping and the opportunities livestock-related interventions could offer them. This is in contrast to considerable research on the roles of women in small-scale crop farming, where their importance is widely recognized and lessons are emerging about how best to reach and support women through interventions and policies . . . . In the past decade, some researchers provided some evidence on causal relations between gender and livestock production . . . but, as this review demonstrates, there remains a dearth of quantitative information on this subject, especially for the mixed crop-livestock systems where most livestock and livestock keepers are found and where the major increases in production will have to occur if the global demand for meat, milk and other animal products in coming decades is to be met . . . . Furthermore, the multiple roles livestock play in livelihoods of the poor make generalizing about women’s roles in, and economic contributions to, livestock development problematic, and prioritizing livestock research and interventions for women’s development both challenging and necessary . . . . By applying a conceptual framework that allows us to organize and better understand existing knowledge about this complex subject, we aim to help identify research for development gaps and opportunities, made in relation to which species and value chains, that appear most likely to benefit poor women and their families.'

2 thoughts on “The role livestock play in women's livelihoods in Africa and Asia: New review”