Skip to primary content
While predicting highly variable impacts on agriculture by 2050, experts show that with adequate investment the region can still achieve food security for all 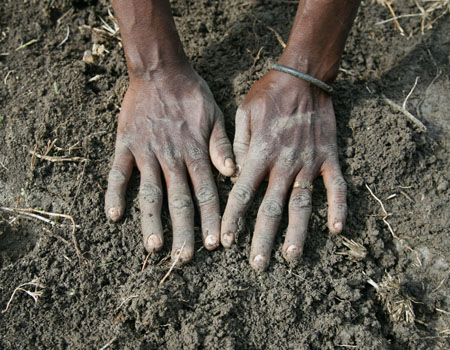 As African leaders prepare to present an ambitious proposal to industrialized countries for coping with climate change in the part of the world that is most vulnerable to its impacts, a new study points to where and how some of this money should be spent. Published in the peer-reviewed journal Agricultural Systems, the study projects that climate change will have highly variable impacts on East Africa’s vital maize and bean harvests over the next two to four decades, presenting growers and livestock keepers with both threats and opportunities.

Previous estimates by the study’s authors projected moderate declines in the production of staple foods by 2050 for the region as a whole but also suggested that the overall picture disguises large differences within and between countries. The new findings provide a more detailed picture than before of variable climate change impacts in East Africa, assessing them according to broadly defined agricultural areas.

‘Even though these types of projections involve much uncertainty, they leave no room for complacency about East Africa’s food security in the coming decades,’ said the lead author of the new study, Philip Thornton of the International Livestock Research Institute (ILRI), which is supported by the Consultative Group on International Agricultural Research (CGIAR). ‘Countries need to act boldly if they’re to seize opportunities for intensified farming in favored locations, while cushioning the blow that will fall on rural people in more vulnerable areas.’

The researchers simulated likely shifts in cropping, using a combination of two climate change models and two scenarios for greenhouse gas emissions, together with state-of-the-art models for maize and beans, two of the region’s primary staple foods.

In the mixed crop-livestock systems of the tropical highlands, the study shows that rising temperatures may actually favor food crops, helping boost output of maize by about half in highland ‘breadbasket’ areas of Kenya and beans to much the same degree in similar parts of Tanzania. Meanwhile, harvests of maize and beans could decrease in some of the more humid areas, under the climate scenarios used in the study. Across the entire region, production of both crops is projected to decline significantly in drylands, particularly in Tanzania.

‘The emerging scenario of climate-change winners and losers is not inevitable,’ said ILRI director general Carlos Seré. ‘Despite an expected three-fold increase in food demand by 2050, East Africa can still deliver food security for all through a smart approach that carefully matches policies and technologies to the needs and opportunities of particular farming areas.’

At the Seventh World Forum on Sustainable Development, held recently in Ouagadougou, Burkina Faso, African leaders announced a plan to ask the industrialized world to pay developing countries USD67 billion a year as part of the continent’s common negotiating position for December’s climate talks in Copenhagen.

The ILRI study analyzes various means by which governments and rural households can respond to climate change impacts at different locations. In Kenya, for example, the authors suggest that shifting bean production more to the cooler highland areas might offset some of the losses expected in other systems.

Similarly, Tanzania and Uganda could compensate for projected deficits in both maize and beans through increased regional trade. In the Common Market for Eastern and Southern Africa (COMESA), maize trade is already worth more than USD1 billion, but only 10 percent of it occurs within the region. As grain prices continue to rise in global markets, several East African countries will be well positioned to expand output of maize and beans for regional markets, thus reducing reliance on imports and boosting rural incomes.

Where crop yields are expected to decline only moderately because of climate change, past experience suggests that rural households can respond effectively by adopting new technologies to intensify crop and livestock production, many of which are being developed by various CGIAR-supported centres and their national partners.

Drought-tolerant maize varieties, for example, have the potential to generate benefits for farmers estimated at USD863 million or more in 13 African countries over the next 6 years, according to a new study carried out by the International Maize and Wheat Improvement Center (CIMMYT) and International Institute of Tropical Agriculture (IITA). Meanwhile, new heat-tolerant varieties of productive climbing beans, which are traditionally grown in highlands, are permitting their adoption at lower elevations, where they yield more than twice as much grain as the bush-type beans grown currently, according to Robin Buruchara of the International Center for Tropical Agriculture (CIAT).

In areas that face drastic reductions in maize and bean yields, farmers may need to resort to more radical options, such as changing the types of crops they grow (replacing maize, for example, with sorghum or millet), keeping more livestock or abandoning crops altogether to embrace new alternatives, such as the provision of environmental services, including carbon sequestration.

This latter option could become a reality under COMESA’s Africa Biocarbon Initiative, which is designed to tap the huge potential of the region’s diverse farmlands and other rural landscapes, ranging from dry grasslands to humid tropical forests, for storing millions of tons of carbon. The initiative offers African negotiators an appealing option in their efforts to influence a future climate change agreement.

‘If included in emissions payment schemes, this initiative could create new sources of income for African farmers and enhance their resilience to climate change,’ said Peter Akong Minang, global coordinator of the Alternatives to Slash-and-Burn (ASB) Programme at the World Agroforestry Centre. ‘Its broad landscape approach would open the door for many African countries to actively participate in, and benefit from, global carbon markets.’

‘Rural people manage their livelihoods and land in an integrated way that encompasses many activities,’ said Bruce Campbell, director of the CGIAR’s Challenge Program on Climate Change, Agriculture and Food Security. ‘That’s why they need integrated options to cope with climate change, consisting of diverse innovations, such as drought-tolerant crops, better management of livestock, provision of environmental services and so forth.’

How rapidly and successfully East African nations and rural households can take advantage of such measures will depend on aggressive new investments in agriculture, CGIAR researchers argue. According to a recent study by the International Food Policy Research Institute (IFPRI), it will take about USD7 billion annually, invested mainly in rural roads, better water management and increased agricultural research, to avert the dire implications of climate change for child nutrition worldwide.

About 40 per cent of that investment would address the needs of sub-Saharan Africa, where modest reductions projected for maize yields in the region as a whole are expected to translate into a dramatic rise in the number of malnourished children by 2050. Thornton’s projections probably underestimate the impacts on crop production, because they reflect increasing temperatures and rainfall changes only and not greater variability in the weather and growing pressure from stresses like drought and insect pests.

‘Farmers and pastoralists in East Africa have a long history of dealing with the vagaries of the weather,’ said Seré. ‘But climate change will stretch their adaptive capacity beyond its limits, as recent severe drought in the region has made abundantly clear. Let’s not leave rural people to fend for themselves but rather invest significantly in helping them build a more viable future.’

About ILRI:
The Africa-based International Livestock Research Institute (ILRI) works at the crossroads of livestock and poverty, bringing high-quality science and capacity-building to bear on poverty reduction and sustainable development. ILRI is one of 15 centers supported by the Consultative Group on International Agricultural Research (CGIAR). It has its headquarters in Kenya and a principal campus in Ethiopia. It also has teams working out of offices in Nigeria, Mali, Mozambique, India, Thailand, Indonesia, Laos, Vietnam and China. www.ilri.org.

About the CGIAR: The CGIAR, established in 1971, is a strategic partnership of countries, international and regional organizations and private foundations supporting the work of 15 international Centers. In collaboration with national agricultural research systems, civil society and the private sector, the CGIAR fosters sustainable agricultural growth through high-quality science aimed at benefiting the poor through stronger food security, better human nutrition and health, higher incomes and improved management of natural resources. www.cgiar.org