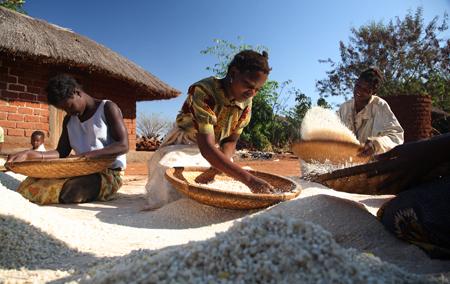 At the end of September 2009, Phil Thornton, agricultural systems analyst at the International Livestock Research Institute (ILRI), made a presentation at an international climate conference in Oxford called ‘Four Degrees & Beyond.’ The research he presented was conducted with Thornton’s long-term colleague, Peter Jones, of Waen Associates (UK).

Thornton and Jones have looked at the probable impacts of climate change on agriculture in sub-Saharan Africa and what needs to be done about this. Africa’s population will grow from 0.8 billion today to some 1.8 billion by 2050. Already, over 40% of Africans live in urban areas, and this urbanization will only increase in future, greatly increasing the continent’s need for food to feed all its urban dwellers.

The prognosis for agriculture is mixed in Africa, where yields per hectare have already stagnated. Climate change is critically important to Africa because the gross domestic product and levels of rainfall are highly correlated here. Any change in rainfall and rainfall variability is likely to bring associated economic change. Given all this, the authors asked themselves if  ‘it can all be held together’ in the future.

Several research studies indicate that yields of major cereals will be reduced by 10 to 30% to mid-century and beyond, although yields will vary widely depending on the crop grown and the location of the farming system. Regarding the impacts of a temperature increase of 5-degrees centigrade on growing seasons and crop yields, southern Africa is likely to experience 20% or more losses in length of growing periods. Thornton said we can expect under a 5 degree C increase many more ‘failed seasons’ in the 2090s, especially in southern Africa, the northern Sahel and the Horn of Africa. Most of rainfed agriculture in regions south of the Zambezi River is likely to become unviable and in much of East Africa, maize yields could fall by 26% and beans by 54%.

Prognosis
A 5-degree centigrade temperature increase will thus increase crop failure in much of sub-Saharan Africa, which will then require massive increases in intensive cropping in the highlands to feed all the people living in urban areas. In more marginal lands, many farmers will be forced to make radical transitions in their livelihoods, turning from cropping to livestock keeping, for example, or abandoning agriculture altogether.

The prognosis for a +5°C SSA
Croppers and livestock keepers have been highly adaptable to short- and long-term variations in climate. But the changes in a plus five-degree world would be way beyond experience. Number of people at risk from hunger has never been higher: 300 million in 1990, 700 million in 2007, and close to 1 billion in 2010 (FAO).

What needs to be done
We need to assess the limits of adaptation to climate change in Africa. And we need to develop comprehensive tools with which to analyze trade offs between, for example, economic growth and food security. We need to build on the adaptive capacity of Africa’s croppers and livestock keepers, increase our investments in agricultural and livestock development, and get the development paradigm for Africa right—one that builds on local, indigenous skills, knowledge and culture.

Mostly what we need to do is to avoid, at all costs, a 5-degree plus world.