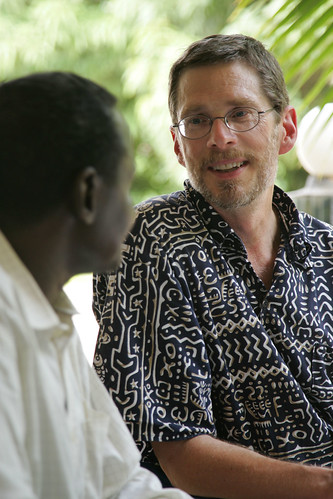 Tom Randolph has been named director of a newly established CGIAR Research Program on Livestock and Fish. Jimmy Smith, new director general of the International Livestock Research Institute (ILRI), a position he took up on 1 October 2011, announced Randolph’s appointment on 13 October 2011.

ILRI leads this CGIAR research program, which is one of several new multi-institutional research programs initiated by the Consultative Group on International Agricultural Research (CGIAR). In this program, which aims to provide more meat, milk and fish by and for the poor, ILRI will be collaborating with other scientists and staff from three of its sister CGIAR centres—the International Center for Tropical Agriculture (CIAT), based in Cali, Colombia; the International Center for Agricultural Research in the Dry Areas (ICARDA), based in Aleppo, Syria; and the WorldFish Center, based in Penang, Malaysia. Many other strategic partners will play key roles in implementing the program in several ‘livestock value chains’ and countries targeted by the new project.

Randolph helped lead the collaborative processes employed over the last two years to develop the concept and subsequent full proposal for this research program.

Before this appointment, Randolph headed a team conducting research on smallholder competitiveness in changing markets under ILRI’s Market Opportunities Theme. His research interests and contributions at ILRI have been varied, including studies at the interface of animal and human health and assessments of the impacts of agricultural problems and the research conducted to address them, including evaluations of the impacts of tick and tick-borne diseases, animal health delivery systems, ILRI’s East Coast fever vaccine development research, the contributions economics and epidemiology can make to animal disease control and the control of bird flu in sub-Saharan Africa.

One of the projects Randolph led has helped to reduce parasite resistance to drugs used to control trypanosomosis (animal sleeping sickness) in the cotton belt of West Africa. This project established a clear picture of the distribution of potential resistance across a zone from eastern Guinea to western Burkina Faso, highlighting the importance of tsetse ecology, farming systems, accessibility to veterinary services and pharmaceutical products, and cattle breed in influencing drug use and misuse. Under Randolph’s leadership, this project evolved from a primary focus on the biological issue to a holistic understanding of the complex epidemiological and socioeconomic factors at farm, local, national and regional levels that influence the problem and determine the ability to address it.

An American from upstate New York, Randolph received an undergraduate degree in Chinese studies in 1976, after which he spent six years teaching English in Zaire with the Peace Corps. On his return to the United States, Randolph pursued an MSc and PhD in agricultural economics from Cornell University. His doctoral dissertation was based on field work he conducted in Malawi with the Harvard Institute for International Development, looking at the impact of agricultural commercialization on child nutrition in smallholder households. His thesis earned the American Agricultural Economics Association’s Outstanding PhD Dissertation Award. He subsequently joined the West African Rice Development Association (WARDA, now Africa Rice Centre), in Senegal, as a Rockefeller-funded post-doctoral fellow, later becoming policy economist and policy support program leader at WARDA’s Côte d’Ivoire headquarters.

Randolph joined ILRI in 1998 and will remain based at ILRI’s Nairobi, Kenya, headquarters as he directs this new multi-country and multi-institutional CGIAR Research Program on Livestock and Fish.