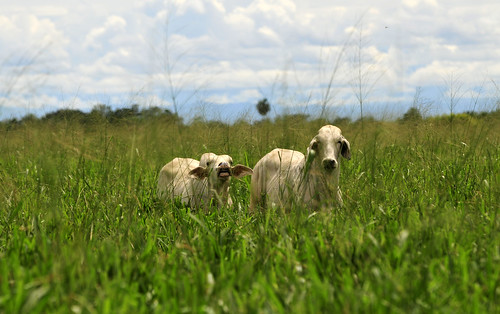 Several hundred people in Rio de Janeiro today will be discussing and debating a topic not often included in high-profile meetings. The topic is how we can use improved livestock feed to reduce both poverty and climate change.

The discussions today will take place at one of 13 ‘learning events’ that are part of an Agriculture and Rural Development Day at the Rio+20 United Nations Conference on Sustainable Development. Staff from CGIAR  Centres are helping to organize and are participating in events throughout this day.

Given that the key messages of this particular learning event run counter to much current thinking about livestock, the participants will share and discuss scientific evidence that demonstrates the benefits of improved feeding practices, particularly their potential for contributing significantly to climate change mitigation while improving livestock production.

Messages
On the table today are both fodders, coarse foods composed of entire plants or the leaves and stalks of cereal crops, and bulky grass or hay forages. The learning event, titled ‘LivestockPlus—How can sustainable intensification of livestock production through improved feeding practices help realize both livelihood as well as environmental benefits?’, will deliver the following three fundamental messages.

Improved tropical forages offer the further advantage of sequestering large amounts of carbon—on a scale similar to that of forests—with the possibility of reducing emissions of nitrous oxide and methane per unit of livestock product. There is evidence that the potential of sown forages to sequester carbon (assuming good pasture and livestock management) is second only to that of forests and that sown forages could realize 60–80% of agriculture’s total potential to mitigate climate change.

If widely applied by the vast army of ‘mixed’ smallholder farmers, who raise livestock as well as grow crops, and who are the mainstay of global food security, improved livestock feeding practices could deliver huge increases in food production at reduced environmental cost against a background of rising livestock production and consumption in the developing world.

Evidence
The result of numerous global initiatives and extensive testing, this work offers practical examples of how improved feeds can raise the production and incomes of smallholder farmers. Superior forage grasses widely adopted in Latin America, for example, already generate up to USD4 billion in Brazil alone. And improved tropical forages have also been adopted widely in Southeast Asia since the start of their promotion in 1995. A recent review indicates that continued adoption of improved feeds, including sown forages, could significantly reduce greenhouse gases on a global scale, while enhancing the livelihoods of the one billion people dependent on livestock-cropping systems.

What remains to be done
To scale up these improved feed resources so that they contribute to a transformed food system, we need more precsie understanding of the impacts of livestock on climate change, with the impacts differentiated by specific livestock-cropping systems, as well as of the potential for improved feeding practices to mitigate climate change. To make livestock and crop production in the tropics more climate friendly through improved feeding practices, smallholders must be given stronger incentives to market their livestock products and to sequester carbon through improved land management. Smallholders might be encouraged to adopt sown (and carbon-storing) forages, for example, through schemes instituted to pay them for the environmental services they provide.

What could be achieved
With donor support for research to obtain conclusive data and to provide policymakers with support for their decision-making, a functional system for implementing the LivestockPlus concept and associated strategies could be available within the next 5–6 years.

These case study presentations will be followed by parallel group discussions on each of the three cases to answer such questions as:
What are the main research findings that support the technological or policy innovation, including evidence of livelihood and environmental benefits?
What were key lessons learned from the research leading to this innovation?
What are the requirements for scaling it up?

The session will close with a moderated panel discussion in plenary with the keynote speaker and case study presenters.

Institutions involved
CATIE is a regional centre of excellence based in Costa Rica that works on solutions for the environment and development in rural communities in Latin America and the Caribbean.

CIAT, the International Center for Tropical Agriculture, based in Colombia, works to increase the eco-efficiency of agriculture to reduce hunger and poverty and to improve human health in the tropics.

EMBRAPA is the Brazilian Agricultural Research Corporation, which works for the sustainable development of Brazilian agribusiness.

ILRI, the International Livestock Research Institute, based in Africa, works to reduce hunger, poverty, ill health and environmental degradation through enhanced livestock systems for poor people in the developing world.

Presenters at the event
This learning event will be chaired by Elcio Guimarães, who is director of research for Latin America and the Caribbean at the International Center for Tropical Agriculture (CIAT). Discussions at the session will be summarized by Nathan Russell, a key organizer of this session who leads corporate communications work at CIAT. One of the three scheduled case study speakers, Michael Blümmel of ILRI, is unable to attend; his presentation will be made by Carlos Seré, former director general of ILRI and now chief strategist for the International Fund for Agricultural Development (IFAD).

Follow the event on the web
Today, 18 Jun 2012, proceedings of the Agriculture and Rural Development Day will be webcast live (the event takes place from 11.30–13.00 Rio time), and you can ask questions and interact with the organizers via Twitter and Facebook. You can also follow the presentations and discussions of this learning event on Twitter as @agricultureday and check updates via the Twitter-tags #RioPlus20 and #Rio4Ag and the Facebook page for ARDD. You can also follow CGIAR at Rio on this landing page on the CGIAR Consortium website.