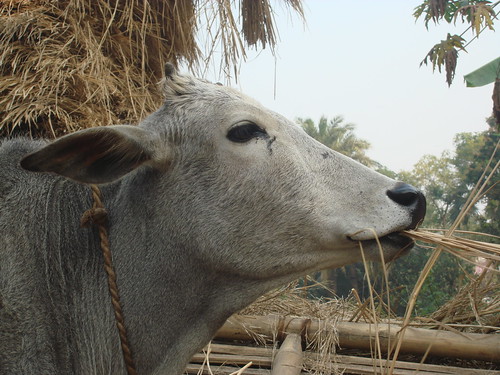 Key findings were presented today on ways to enhance the value of coarse crop ‘wastes’—better termed ‘residues’—as feed for cattle, water buffalo, sheep, goats and other ruminant farm animals. The talk was given at a ‘learning event’ that is part of Agriculture Day at the Rio-20 United Nations Conference on Sustainable Development.

Carlos Seré, former director general of the International Livestock Research Institute (ILRI) now serving as chief strategist for the International Fund for Agricultural Development (IFAD), delivered this presentation on behalf of Michael Blümmel, an animal nutritionist based in ILRI’s office in Hyderabad, India, who could not make the event as scheduled.

The gist of the presentation is that wheat and rice straw, maize stover, groundnut haulms and other residues of crops that remain after their grain or pods have been harvested for human consumption are major feed resources for livestock in developing countries. Widespread and increasing shortages of arable land and water in these countries are increasing the importance of these crop residues for livestock feed, and their importance will only increase over the coming decades as human population grows and as more and more people move out of poverty and begin adding more milk and meat to their diets.

In recent years, livestock and crop improvement researchers have worked together to improve the fodder value, in terms of both quantity and quality, of crop residues at their source. They’ve done this in crop improvement programs that incorporate fodder traits in crop selection, breeding and new cultivar release criteria. Key cereals and legumes are tackled and both conventional and molecular breeding techniques are employed. Fodder traders and feed processors have started employing additional interventions to further improve the superior crop straws and stover.

The following examples illustrate the many promising findings from this collaborative fodder research.

01  Nutritionally significant variations exist in crop residue fodder value among existing cultivars that can be exploited through simple phenotyping without detriment to primary crop traits such as grain and pod yields.
As a ballpark figure, 5 percentage units in digestibility can be exploited in crop residue fodder quality without detriment to gain or pod yield in all key cereal and leguminous crops. The advantage of daily milk yield accruing from 5% difference in digestibility of basal diet in well designed ration is about 5 kg per day due to a multiplicator effect from both higher energy concentration in the diet and higher intake.

02  Simple and network-sharable food/feed/fodder nutritional phenotyping techniques have been established, such as near-infrared spectroscopy (NIRS) platforms that support whole-plant crop improvement paradigms and programs.
ILRI NIRS platforms in India and Ethiopia are being used by other research programs (e.g., the new CGIAR Research Program on Livestock and Fish) and research organizations (e.g., the International Center from Tropical Agriculture and the International Centre for Agricultural Research in the Dry Areas). Staff of national agricultural research institutions from the Congo, Eritrea, Ethiopia, Rwanda, Tanzania and Uganda have been trained in the NIRS technology and have access to network-shared NIRS equations. NIRS is increasingly being used to test for more qualitative grain traits such as lysine, tryptophan, iron, zinc and polyunsaturated fatty acids, with the aim of optimizing whole plants. This collaborative research is facilitating the analysis of 50 to 100 cultivars every day and gaining information about all their pertinent grain and crop residue traits.

03  Fodder value can be further increased through conventional crop breeding (such as recurrent selection) and molecular crop breeding (such as quantitative trait loci [QTL] identification and backcrossing).
Identification of stay-green QTLs and their backcrossing into elite sorghum varieties could increase stover digestibility by 3 to 5 percentage units while also increasing the sorghum plant’s drought resistance and water-use efficiencies.

04  In mixed crop-and-livestock agricultural production systems, the rates of adoption of new crop cultivars improved for both food and feed/fodder traits appear to be better than that for adoption of new cultivars improved for food traits only.
In a recent maize project in East Africa, farmers ranked stover traits 2.4 and grain yield 2.9 on a scale of 3. Farmers were most likely to adopt new maize cultivars that had improved stover as well as grain traits. Anecdotal  evidence from groundnut adoption studies in India suggests that farmers prefer relatively small additive advantages—say 10% more pod + 10% more haulm + 10% more haulm quality—over (often theoretical) drastic increases in pod yield.

05 Participants in fodder value chains for straw and stover profit from superior straw and stover.
Price premiums for 3 to 5 percentage units in digestibility are in the range of 10 to 30%. There is higher demand for higher quality crop residues and superior sorghum stover is now regularly transported more than 400 km in parts of India. There are significant employment opportunities in harvesting, chopping, transporting and selling these crop residues.

06  Further improvement of superior straw and stover, in the form of supplementation, fortification or densification, can be done in feed processing, with productivity levels achieved from such processed but largely by-product-based feeds being four or more times greater than current levels of production.
Complete rations based on more than on 80% by-products (50–60% straws and stovers) can support 15–16 kg of milk daily in dairy buffaloes, about 1 kg live-weight gain in cattle and 120–130 g in sheep. Complete rations are suitable for smallholder farmers because the rations need not entail complex feed processing options; simply chopping and supplementing residues can suffice.

07  Increasing current yields of animals in India, such as by doubling the average daily yield of 3.6 kg of milk (across buffalo, crossbred and local cattle herds), would reduce levels of greenhouse gases dramatically, decreasing methane emission from dairy production by more than 1 million tons per year.
This is straightforward; increasing average daily milk yields in India from 3.6 to 6 to 7 kg per animal per day would reduce methane production from dairy animals relative to the same amount of milk produced by about 1 million tons per year.

In addition, there are good prospects for mainstreaming such multi-dimensional crop improvement outputs. For example, new CGIAR Research Programs (such as those on maize, rice, dryland cereals, and grain legumes) have already adopted the approach and have incorporated fodder value as high-priority traits in these crops.

Read more
Read more about the context for this livestock feeds learning event at Agriculture Day at Rio+20 on this ILRI News Blog:
The Road Back to Rio: ‘LivestockPLUS Learning Event’ shows how better feed reduces poverty AND livestock ‘hoofprints’, 18 Jun 2012.

Follow the presentations and discussions of this learning event on Twitter as @agricultureday and check updates via the Twitter-tags #RioPlus20 and #Rio4Ag and the Facebook page for ARDD. You can also follow CGIAR at Rio on this landing page on the CGIAR Consortium website.