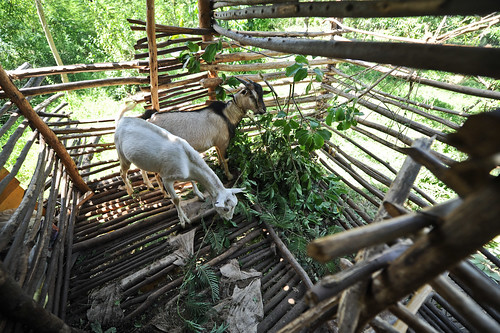 A new report identifies ‘regret-free’ approaches for adapting agriculture to climate change. Amid fears of wasted investments and imprecise science, researchers are providing clarity on actions small-scale food producers and their governments can take now. Gala goats, pictured above, for example, are an improved breed being acquired by farmers in Kenya’s Lower Nyando region to help them cope with climate change: The goats mature early, are easy to manage and produce high levels of milk (photo credit: K Trautmann).

Findings from a new report from the CGIAR Research Program on Climate Change, Agriculture and Food Security (CCAFS) chart a path for farmers to adapt to climate shifts despite uncertainties about what growing conditions will look like decades from now.

As this week’s UN climate talks in Bonn continue to sideline a formal deal on agriculture, the study, ‘Addressing uncertainty in adaptation planning for agriculture’, which was published recently in the Proceedings of the National Academies of Sciences (PNAS), finds that the cloudy aspects of climate forecasts are no excuse for a paralysis in agriculture adaptation policies.

Climate projections will always have a degree of uncertainty, but we need to stop using uncertainty as a rationale for inaction’, said Sonja Vermeulen, head of research at CCAFS and the lead author of the study.

‘Even when our knowledge is incomplete, we often have robust grounds for choosing best-bet adaptation actions and pathways, by building pragmatically on current capacities in agriculture and environmental management, and using projections to add detail and to test promising options against a range of scenarios.’

The CCAFS analysis shows how decision-makers can sift through the different gradients of scientific uncertainty to understand where there is, in fact, a general degree of consensus and then move to take action. Moreover, it encourages a broader approach to agriculture adaptation that looks beyond climate models to consider the socioeconomic conditions on the ground. These conditions, such as a particular farmer’s or community’s capacity to make the necessary farming changes, will determine whether a particular adaptation strategy is likely to succeed.

Getting farmers, communities, governments, donors and other stakeholders to embrace various adaptation strategies can end up being equally or more important than seeking higher levels of scientific certainty from a climate model’, said Andy Challinor, a professor at the Institute for Climate and Atmosphere Science, School of Earth and Environment at the University of Leeds, who co-leads research on climate adaptation at CCAFS and was also an author of the study.

‘There is no question that climate science is constantly improving’, he added. ‘But scientists also need to understand the broader processes involved in agriculture adaptation and consider how we can better communicate what we do know in ways that are relevant to a diverse audience.’

The CCAFS study uses examples from the program’s recent work in the developing world to illustrate how some countries have pursued climate change adaptation strategies that will that help them prepare for shifts in growing conditions in the near-term and long-term.

Some of the strategies involve relatively straightforward efforts to accommodate changes in the near-term that will present growing conditions that are not significantly different from what farmers have experienced in the past.

The authors also explore how in some parts of the world adaptation planning must consider long-term changes that exceed historical experience and require ‘wholesale reconfigurations of livelihoods, diets, and the geography of farming and food systems’.

For example, in Kenya, rain-fed agriculture contributes more than one-quarter of the GDP. Recent droughts have left millions without access to adequate food and slowed the nation’s economic growth by an annual average of 2.8 per cent between 2008 and 2011. In March 2013, after an extensive consultation process engaged most sectors of society, Kenya formally launched its national climate change action plan.

In Kenya, as well as in many countries in Africa and elsewhere in the developing world, climate change is a critical policy priority’, said James Kinyangi, of the International Livestock Research Institute (ILRI) and a regional program leader for CCAFS in East Africa. ‘It is imperative for developing nations to embrace the adaptation planning process and for industrialized countries to unlock much-needed funding support so that this planning fast tracks climate adaptation actions.’

‘Some farmers and countries are going to need to make big transitions in what food they produce’, concluded Vermeulen. ‘Science is now reaching a point where it will be able to provide advice on when—not just whether—major climatic shifts relevant to agriculture will happen. Helping governments and farmers plan ahead will make all the difference in avoiding the food insecurity and suffering that climate change threatens.’

About CCAFS
The CGIAR Research Program on Climate Change, Agriculture and Food Security (CCAFS) is a strategic partnership of CGIAR and Future Earth, led by the International Center for Tropical Agriculture (CIAT). The International Livestock Research Institute (ILRI) partners CCAFS in its work. Two of the authors of this study, Philip Thornton and James Kinyangi, are ILRI scientists.