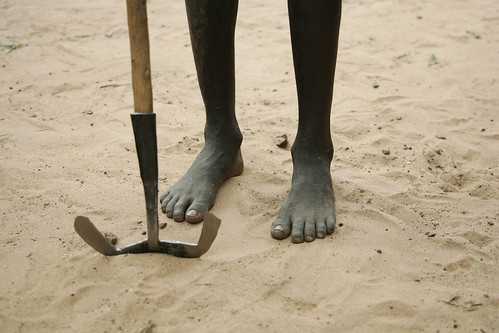 A youth sets out with his weeding tool to tend to his family's crop of sorghum in Katanga Village, near Fakara, in Niger (photo credit: ILRI/Mann).

Along with many other major media, Discovery News reported yesterday on a collection of research papers just published that agree that our world is likely to warm by four degrees Centigrade by the end of this century. Among the scientists quoted in these media reports is agricultural systems analyst Philip Thornton, of the International Livestock Research Institute (ILRI), on what the likely impacts will be on agriculture in sub-Saharan Africa. The researchers concur that research to develop new means to adapt to a warmer world are critically needed. Publication of these science papers comes at the start of the United Nations Climate Change Conference being held in Cancún, Mexico.

'Since the late 1990s, many researchers and policy makers have held a two-degree Celsius (3.6-degree Fahrenheit) global temperature increase relative to pre-industrial times as a benchmark limit for global warming, saying that keeping warming below this threshold increases the likelihood that catastrophic changes can be avoided.

'But we are hardly on track to meet that target, researchers say, and an average global warming of four degrees Celsius (7.2 degrees Fahrenheit) by the end of this century is more likely than two.

'In a collection of papers published today in the Philosophical Transactions of the Royal Society A, researchers paint a picture of what a four-degree warmer world might look like, including changes in agriculture and water supply, ecosystems, sea level rise and the displacement of populations.

'"People are talking about two degrees but the chances of actually delivering on that are pretty slim," said Mark New of Oxford University, United Kingdom, one of the researchers who compiled the collection.

'"If we had a kind of a Marshall Plan to transform every major economy to a non-carbon based economy over the next 15 years, it's doable. But that's not going to happen. A lot of work suggests that the most likely outcome is between three and four (degrees increase) with it very likely to be more than four."

'Dry areas are likely to get drier, according to a study of water supply done by New and others, which could have severe implications for agriculture.

'A team led by [Philip] Thornton of the International Livestock Research Institute used models to project the effect of a four-degree temperature increase on crop production in sub-Saharan Africa.

'"The rate of crop failure in southern Africa increases to nearly one in every two years," New said of the study. "You can't continue to rely on your existing crops or practices. There's going to have to be some kind of a transformation."

'"Most of these countries have low capacity to adapt," he added. . . .

'"Some of the impacts could be overcome if society takes adaptive action, but the difference between adapting at two degrees and at four degrees is very different," New said. "There needs to be research into technologies to assist adaptation just as much as we need research into technology for moving out of a carbon based transportation system." . . .'

Read Philip Thornton’s science paper in Philosophical Transactions of the Royal Society A: Agriculture and food systems in sub-Saharan Africa in a 4 ° C + world, 29 November 2010.