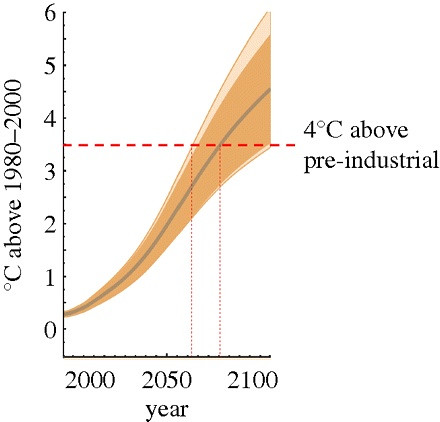 Projections of global warming relative to pre-industrial for the A1FI emissions scenario—the one we’re currently on. Dark shading shows the mean ±1 standard deviation for the tunings to 19 AR4 GCMs [IPCC Fourth Assessment General Circulation Models]  and the light shading shows the change in the uncertainty range when . . . climate-carbon-cycle feedbacks . . . are included. Published in a Royal Society special issue on climate change, 29 November 2010 (graphic credit: Philosophical Transactions of the Royal Society Series A, Special Issue, 29 November 2010).

An article in the highly regarded Climate Progress website names a paper by agricultural systems analyst Philip Thornton, of the International Livestock Research Institute (ILRI), titled ‘Agriculture and food systems in sub-Saharan Africa [SSA] in a 4°C+ world’, as one of the more important articles appearing in a current special issue on climate change of the Philosophical Transactions of the Royal Society Series A.

‘One of the greatest failings of the climate science community (and the media) is not spelling out as clearly as possible the risks we face on our current emissions path, as well as the plausible worst-case scenario, which includes massive ecosystem collapse. So much of what the public and policymakers think is coming is a combination of:

‘In fairness, a key reason the scientific community hasn’t studied the high emissions scenarios much until recently because they never thought humanity would be so self-destructive as to ignore their warnings for so long, which has put us on the highest emissions path (see U.S. media largely ignores latest warning from climate scientists: “Recent observations confirm … the worst-case IPCC scenario trajectories (or even worse) are being realised”—1000 ppm [A1FI]).

‘A special issue of the Philosophical Transactions of the Royal Society A, “Four degrees and beyond: the potential for a global temperature increase of four degrees and its implications,” lays out this 4°C (7°F) world. Warming of 7ºF is certainly not the worst-case in the scientific literature (see M.I.T. doubles its 2095 warming projection to 10°F—with 866 ppm and Arctic warming of 20°F and “Our hellish future: Definitive NOAA-led report on U.S. climate impacts warns of scorching 9 to 11°F warming over most of inland U.S. by 2090 with Kansas above 90°F some 120 days a year — and that isn’t the worst case, it’s business as usual!”).

‘But for the first time, “A hellish vision of a world warmed by 4ºC within a lifetime has been set out by an international team of scientists,” as the UK’s Guardian describes it:

‘A 4ºC rise in the planet’s temperature would see severe droughts across the world and millions of migrants seeking refuge as their food supplies collapse.

‘These papers began as conference presentations . . . . In a must-read paper that is the source of the top figure, “When could global warming reach 4°C?” Betts et al. drop this bombshell:

‘”Using these GCM projections along with simple climate-model projections, including uncertainties in carbon-cycle feedbacks, and also comparing against other model projections from the IPCC, our best estimate is that the A1FI emissions scenario would lead to a warming of 4°C relative to pre-industrial during the 2070s. If carbon-cycle feedbacks are stronger, which appears less likely but still credible, then 4°C warming could be reached by the early 2060s in projections that are consistent with the IPCC’s ‘likely range’.”. . .

‘Another important Royal Society article is the concluding piece, “The role of interactions in a world implementing adaptation and mitigation solutions to climate change,” by Rachel Warren.  She makes a crucial point that is all too neglected in most discussions of adaptation — it is the interaction of impacts that is likely to overwhelm, particularly when you consider the very real risk of eco-system collapse over large parts of the Earth:

‘”… a 4°C world would be facing enormous adaptation challenges in the agricultural sector, with large areas of cropland becoming unsuitable for cultivation, and declining agricultural yields. This world would also rapidly be losing its ecosystem services, owing to large losses in biodiversity, forests, coastal wetlands, mangroves and saltmarshes, and terrestrial carbon stores, supported by an acidified and potentially dysfunctional marine ecosystem. Drought and desertification would be widespread, with large numbers of people experiencing increased water stress, and others experiencing changes in seasonality of water supply. There would be a need to shift agricultural cropping to new areas, impinging on unmanaged ecosystems and decreasing their resilience; and large-scale adaptation to sea-level rise would be necessary. Human and natural systems would be subject to increasing levels of agricultural pests and diseases, and increases in the frequency and intensity of extreme weather events.

‘”In such a 4°C world, the limits for human adaptation are likely to be exceeded in many parts of the world, while the limits for adaptation for natural systems would largely be exceeded throughout the world. Hence, the ecosystem services upon which human livelihoods depend would not be preserved. Even though some studies have suggested that adaptation in some areas might still be feasible for human systems, such assessments have generally not taken into account lost ecosystem services. . . .

‘. . . [T]here are several important articles, like “Agriculture and food systems in sub-Saharan Africa [SSA] in a 4°C+ world,” which concludes:

‘The prognosis for agriculture and food security in SSA in a 4°C+ world is bleak. Already today, the number of people at risk from hunger has never been higher: it increased from 300 million in 1990 to 700 million in 2007, and it is estimated that it may exceed 1 billion in 2010. The cost of achieving the food security Millennium Development Goal in a +2°C world is around $40–60 billion per year, and without this investment, serious damage from climate change will not be avoided. Currently, the prospects for such levels of sustained investment are not that bright. Croppers and livestock keepers in SSA have in the past shown themselves to be highly adaptable to short- and long-term variations in climate, but the kind of changes that would occur in a 4°C+ world would be way beyond anything experienced in recent times. There are many options that could be effective in helping farmers adapt even to medium levels of warming, given substantial investments in technologies, institution building and infrastructural development, for example, but it is not difficult to envisage a situation where the adaptive capacity and resilience of hundreds of millions of people in SSA could simply be overwhelmed by events. . . .