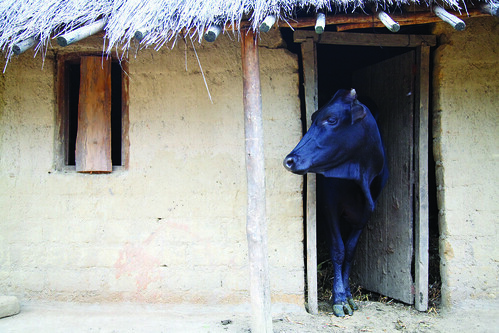 A dairy cow looks out from her stall in central Malawi. Can such ubiquitous backyard livestock farming in the developing world feed the growing world? (picture credit: ILRI/Mann).

A special report on feeding the world, ‘The 9-billion people question,’ appears in this week’s issue of the Economist, as the world continues to grapple with a global food crisis. The author is the Economist‘s globalization editor, John Parker. In an article titled ‘Doing more with less’, Parker argues that ‘the only reliable way to produce more food is to use better technology.’

The world has three main ways to produce more food for our growing populations, he states, and we’ll need new technology for each. The three ways are better seeds, more productive livestock systems and advanced use of plant genetics, including genetic modification.

Parker gives examples of how ‘it is possible to grow more food, more efficiently, on both a regional and a national scale.’ ‘But,’ he asks, ‘can it be done on a global scale . . . to feed 9 billion people? If so, how?’

‘The main gains will have to come in three ways,’ Parker writes: ‘from narrowing the gap between the worst and best producers; from spreading the so-called “livestock revolution”; and—above all—from taking advantage of new plant technologies.’

(1) Regarding the first way, Parker says better technology is already closing the gap between best and worst producers in comparable environments.

(2) Regarding the second way, Parker writes: ‘The second main source of growth will consist of spreading a tried and tested success: the “livestock revolution”. This consists of switching from traditional, open-air methods of animal husbandry, in which chickens and pigs scratch and root around the farm, eating insects, scraps and all sorts of organic waste, to closed “battery” systems, in which animals are confined to cages and have their diet, health and movement rigorously controlled. This entails huge losses in animal welfare, and European consumers are reacting against the system. But there are also gains in productivity and sometimes even in welfare, by reducing losses from diseases and predators that in traditional systems can be distressingly high.

‘Improving livestock farming is important because of meat’s growing share in the world’s diet. Meat consumption in China more than doubled in 1980-2005, to 50kg a year per person. Between now and 2050, meat’s share of calories will rise from 7% to 9%, says the FAO; the share of dairy produce and eggs will rise more.

‘Livestock matters for many reasons. It provides financial security in poor countries, where herds are often a family’s savings. It can affect people’s health: new infectious diseases are appearing at the rate of three or four a year, and three-quarters of them can be traced to animals, domestic and wild. Avian flu is just one example. Livestock also plays a part in global warming. Much of the methane in the atmosphere—one of the worst greenhouse gases—comes from cattle belching.

‘Since the 1980s livestock production has far outstripped that of cereals. World meat output more than doubled between 1980 and 2007. Production of eggs rose from 27m tonnes to 68m over the same period. Some countries have done better still. India has the world’s largest dairy herd. Its milk production trebled, to 103m tonnes, over a period when global milk output increased by half. Brazil increased its production of chickens fivefold in 1987-2007 to become the world’s largest exporter. Most spectacularly, China raised its output of both eggs and milk tenfold.

‘For sheer efficiency, there is little question that battery systems do a better job than traditional methods. A free-range hen scratching around might lay one or two eggs a week. Feeding her costs nothing, giving a net gain of 50-100 eggs a year. A battery chicken will lay six eggs a week. She might cost the equivalent of 150 eggs to feed, producing an annual net gain of 150 eggs. And selective breeding has made her more economic to keep. Battery chickens used to need 4kg of feed for 1kg of eggs; now they need only 2kg.

‘Moreover, it is almost impossible to scale up a farmyard operation: there are only so many insects to eat, and so many hens one family can look after. And to breed the most productive hens which convert their feed most efficiently into eggs and are most resistant to disease, you need large flocks.

‘So there are two reasons for thinking that the livestock revolution will continue. One is that some countries still lag behind. An example, surprisingly, is Brazil, which has just one head of cattle per hectare—an unusually low number even for a country with so much land. Roberto Giannetti da Fonseca, of the São Paulo industry federation, says Brazil should be able at least to double that number—which could mean either doubling beef production or using half the area to produce the same amount.

‘Carlos Sere of the International Livestock Research Institute thinks traditional systems could borrow some of the methods of closed battery-farm systems—notably better feeding (giving a small amount of animal feed makes a big difference to the weight of range-land cattle) and the introduction of new breeds for better yields (as Kabiyet did by switching from longhorn to Holstein cattle).

‘The second reason for expecting further gains is that recent genetic analysis could improve breeding dramatically. About a third of the livestock revolution has come about through selecting and breeding the best animals. Another third comes from improved feeding and the remainder from better disease control. In the 1940s and 1950s breeding relied on the careful recording of every animal in the herd or flock; in the 1970s on artificial insemination by the best sires; and in the 1980s on embryo transfers from the best females into ordinary breeding animals.

‘New genetic analysis now promises to bring in another stage, says the FAO’s Henning Steinfeld. It allows breeders to select traits more precisely and thus speeds up breeding by reducing generational intervals: if you know which genetic traits an animal has, there is no need to wait several generations to see how things turn out.

‘This will not happen everywhere. Europeans and—to some extent—Americans are increasingly influenced by welfare concerns. They jib at confining animals. The European Union has banned certain kinds of cages, and California is following suit. But, so far, people in emerging markets, where demand for meat and animal products is growing fast, are less concerned about such things, so the next stage of the livestock revolution will mainly be concentrated there.’

(3) Regarding the third way—making better use of plant genetics, Parker argues that ‘the change likely to generate the biggest yield gains in the food business—perhaps 1.5-2% a year—is the development of “marker-assisted breeding”—in other words, genetic marking and selection in plants, which includes genetically modifying them but also involves a range of other techniques. This is the third and most important source of growth.’

Read the whole special report in the Economist: The 9 billion-people question, 24 February 2011.

Read the whole article in the Economist: Doing more with less, 24 February 2011.

Listen to John Parker interviewed on this subject: A special report on food, 24 February 2011.