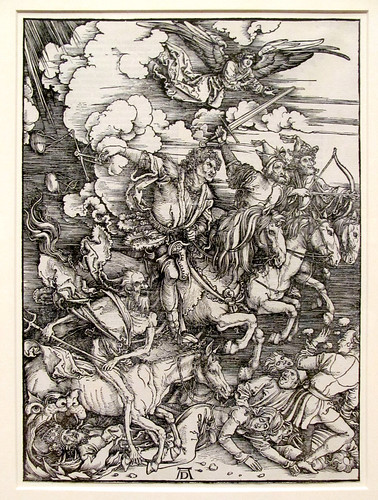 A prolific writer of scientific publications and a scientist of particularly wide research interests, Grace began her ‘big-picture’ talk on zoonoses—on why, and if, they are ‘the lethal gifts of livestock’—with an overview of human health and disease at the beginning of the 21st century. 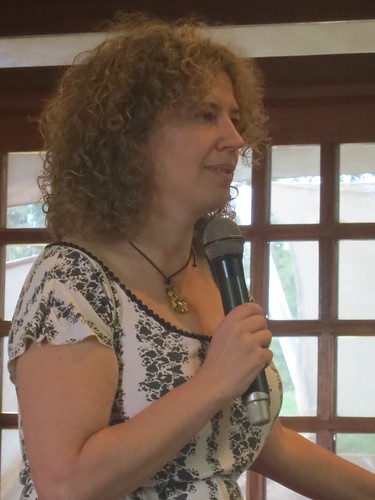 Regarding diseases, it’s not the past we have to worry about, says ILRI scientist Delia Grace; it’s the diseases we’re picking up and the lifestyle choices we’re making (picture credit: ILRI/Susan MacMillan).

‘But a few facts here just to get us in the mood.

‘Of our 7 billion people, 55 million die each year; 18 million die of infection. That’s preventable—there’s no reason now why anyone should die of an infectious disease. But to put that in perspective, there are lots of other preventable things that also kill people: 1.2 million people die each year in road traffic accidents, 170,000 from fatal agricultural accidents and 22,000 (and rising) from extreme weather events.

‘Of those people who die each year . . . two-thirds live in middle-income countries and most of those people die of lifestyle-associated diseases (cardio-vascular/chronic). About a sixth of those who die each year die in high-income countries, and most of them die from being just too old—they die from things like Alzheimer’s and stroke and cardiac disease, things that often come at the end of a life. And then there are the one-sixth who die in low-income countries, and what they die of are the ‘preventables’, mainly infectious diseases.

So, where do these infectious diseases come from? When we look at diseases as a whole, we can see that most are ‘earned’. The wages of sin may be death but the wages of lifestyle choice is disease.

‘The major causes of disease on this planet are the choices we make or the choices that are forced upon us: degenerative diseases, cardiac diseases, diabetes, stroke, cancer. Allergies and asthmas, which are probably reflections of a lifestyle that was not the way we were evolved to live. Those diseases are not the focus of this discussion.

‘What we are focusing on are the “souvenirs”, the diseases we pick up from other sources. And those sources are pretty much animals. Around 60 per cent of all human diseases are shared with animals, and of the new and emerging diseases, 75 per cent are “zoonotic”, that is, they come from animals. What’s more, of the 18 million people who die of infectious diseases each year, two of the biggest killers are zoonotic, or jumped from animals to people.

‘One thing that distinguishes the “souvenir” diseases is that many of these are diseases that kill people when they are young or in the prime of their life, when they have a future ahead of them.

We’re all going to die—that’s one thing that’s fairly inevitable. If we want to spend scarce resources doing something about making our planet more healthy and productive, it makes sense to invest in the souvenirs, the diseases we’ve acquired rather than these end-of-life diseases, about which nothing much can be done.

‘In fact, some economists argue it’s cheaper to let people die once they’ve reached a certain age than it is to invest in trying to make them better, because they’re not going to contribute much more to society.

The diseases that don’t matter so much we call the ‘legacies’. These are the diseases that have always been with us, the diseases that humans brought with them in their evolution from non-human primates. It’s interesting to see that these diseases (e.g., staph, lice, typhoid) are pretty much conquered. So it’s not the past we have to worry about; it’s what we’re picking up and the choices we’re making. 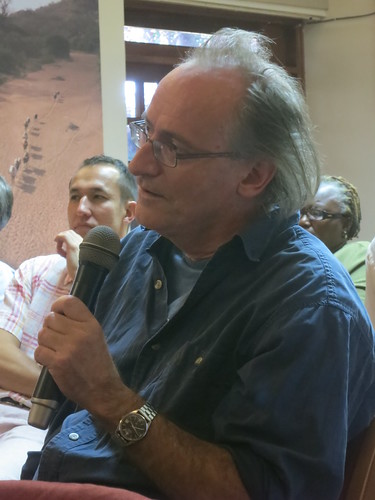 ‘So, how do these diseases get from animals into people, these 60 per cent of diseases that we share with animals? “Spillover” is the word. Here we see what we call an epidemiological or sylvatic cycle. That’s a little pathogen living in a kind of equilibrium with its wild host. By the usual evolutionary rules, once these pathogens have been living a long time with their hosts, they tend to co-evolve so that they get a little less malignant. Otherwise, if the pathogen kills all its hosts, it’s not good for its long-term survival. So what you tend to get are complex pristine ecosystems with lots of hosts and lots of pathogens, all in an evolutionary race but all staying in a relative status quo.

‘Once you bring in humans, you can get spillover. Once humans start coming into these pristine ecosystems and start messing with them—start killing lots of animals or butchering game meat or doing other things that happen when people invade pristine ecosystems—some of these pathogens can spill over into humans. What tends to happen when they first spill over is that they’re not adapted to humans: they kill them and that’s it. That’s what we tend to see with the ebola and marburg viruses; you’ve heard about these in Uganda. They spill over, they kill, that’s it. But if they get lots and lots of opportunities to spill over to people, evolution starts kicking in, too, and they now have got a new host, a new lease, so they’re going to start being able to be transmitted more readily, from human to human.

‘The other thing that can happen in these sylvatic cycles is the spillover can occur into livestock. This can be expected. Humans have contacts with wild animals, but livestock have many more. So we often see that livestock can act as a sort of bridge to bring these wild animal diseases into people. And that’s what we see with diseases such as the Nipah virus, diseases such as avian influenza and Rift Valley fever. The host is out there somewhere in the wild; often we don’t know where it is. It’s shocking to say: we still aren’t sure where the host for Rift Valley fever is, we just don’t know. But we know it gets into livestock, and from livestock it gets into people. People can be a dead-end host—the virus can get in, sicken and kill and that’s it—or the virus can gradually start adapting to humans.

I would argue—this is a little bit provocative and not everyone would agree—that spillovers happen all of the time and most of the time just aren’t any big deal. A lot of the present effort to control emerging infectious diseases is perhaps not well directed because we’re dealing with problems that are intrinsically self-limiting. However, when you look back at history, in order for a spillover to become a disaster—in order for a spillover to become a pandemic, a civilization-altering disease—you need something else. I think this missing ingredient is great societal dislocation.

‘And that’s what history shows. The first big transition was the Neolithic transition. I’m going to come back to that because it’s important. Other examples, from the 13th to the 15th centuries, Europe went through a little Ice Age—we talk about climate change making it hotter today; then, it got colder. People got hungry, people, starved, people moved; you got Black Death and it killed one in three.

‘When they opened up the New World and when people came to the Americas, something like 90 per cent of the population died in the Americas, from smallpox, from measles. This is what we call ‘virgin soil’ epidemics; people who had no immunity; why? because they hadn’t hung out with livestock for long enough, according to some people, so people just died in droves.

‘But it wasn’t just a disease—it was the collapse of their society, the collapse of a highly advanced, highly stable, highly functioning society. It was destroyed from the outside and the disease came in.

The riders of the Apocalypse do not ride alone. Plague by itself needs war, needs famine, needs destruction.

‘We saw the same in the First World War, with the trenches and that massive societal misery, which led to Spanish flu and 40 million dying, and colonialization and urbanization in Africa in the early 20th century leading to HIV. 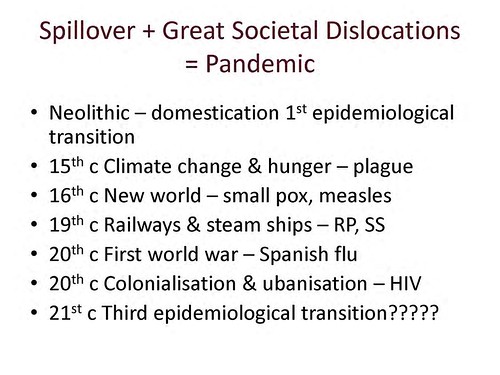 ‘Some argue and some spend millions of dollars hearing that we are about to enter a new time of unprecedented societal dislocation. As we get massive population increases, massive climate change, massive global destruction, we’re in for another big plague.

‘Let’s look at the first epidemiological transition, just to take us back to history and to show how domestication leads to disease. The first [animal we domesticated] was the dog [15,000–30,000 BC], and some would argue that the dog domesticated us, and the last was the goose (1,500 BC), and anyone who has been chased around a farm by a goose knows that they are as yet imperfectly domesticated!

But between the dog and the goose, there’s been a long range of domestication and the animals brought disease with them, diseases we tend to think of as human diseases; measles, mumps, diptheria, flu, smallpox, they all jumped from animals, many of them from livestock. 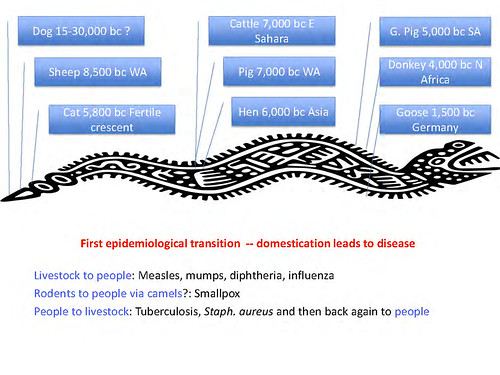 ‘And of course this is a dynamic: once they jumped in they can jump back; other diseases jumped from people to livestock, and once they were in the livestock, they came back again.

‘So that was the link between livestock and disease and why livestock play such an important role in human disease.

This ends part one of this ILRI ‘livestock live talk’ presentation by Delia Grace on ‘The lethal gifts of livestock’. Check back here tomorrow for part two.

Read the invitation to this ILRI ‘livestock live talk’, and sign up here for our RSS feed on ILR’s Clippings Blog to see future invites to this new monthly seminar series.