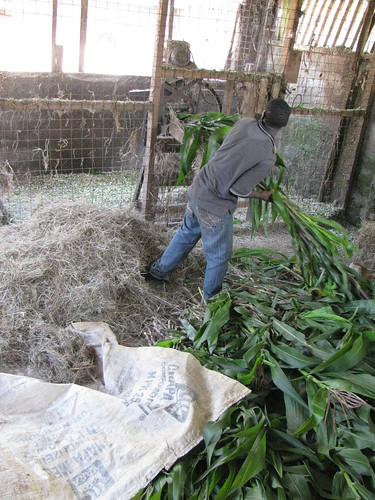 CGIAR has just published a really useful snapshot of the world’s major food crops, animals and tree and water resources and what is likely to happen to them in the face of climate change, the effects of which on food production will require reexamining what’s in the cooking pot, especially in regions where people already do not get enough to eat. Above, a worker on a small farm in Limuru, Kenya, pushes maize stalks (after their cobs have been harvested) through a pulverizer before feeding the stover to the cows; this is one way small-scale farmers can improve their dairy cow feeding and milk yields while reducing the amount of methane their cows generate per unit of milk produced. (Photo on Flickr by Luigi Guarino.)

CGIAR, the world’s leading international agricultural-research-for-development organization, has just done something really useful. It has published a snapshot of how climate change is likely to affect key food crops and livestock farming and natural resources in poor countries, where these staple foods and resources remain the backbone not only of food security but also of national economies. What happens to maize and wheat and rice and cattle and goats and sheep and trees and water, for example, will foretell what happens to the 1 billion people living in severe poverty today.

This snapshot summarizes the state of knowledge on 21 CGIAR crop commodities as well as on the ‘living’ livestock assets of the poor and the water and tree resources on which they depend.  The study, Impacts of climate change on the agricultural and aquatic systems and natural resources within the CGIAR’s mandate, should help decision-makers at all levels prepare better for future food production on our warming planet.

The summaries, written by scientists at 14 of the 15 CGIAR centres, outline the importance of each commodity for food and nutrition security, its biological vulnerability to climate change, and the likely socio-economic vulnerability of the people affected.

The study shows points up some surprising gaps in our knowledge. For example, crops like cassava and yam, which make critically important contributions to the food security of millions of people and are highly climate-resilient, have been little studied in relation to a changing climate. We also know little about how multiple stressors of animals and plants may combine. We also have big knowledge gaps about likely impacts of climate change on weed, pest and disease complexes. We need this information to help identify and evaluate the trade-offs and synergies of particular climate change adaptation and mitigation options in different places.

A few things are already for certain. We must develop hardier varieties of maize, rice and wheat—the three main food staples around the world—quickly to avoid declines in their yields. And the common sources of protein—livestock, fish, and even soybeans—all face difficulties in adapting to the new normal.

Crops and animals till now neglected by major research initiatives, and now considered ‘old-fashioned’ by many, are likely to play an increasingly important role on global food production once again. Drought-resistant camels and goats, ‘famine foods’ such as heat-tolerant cassava and millet, and dual-purpose crops such as protein-rich cowpea (aka black-eyed peas) and groundnut that feed people and animals alike are all likely to come back to the fore in regions with drying or more unpredictable climates.

In some drying regions, smallholders will be forced to switch from crop growing to livestock raising, and/or from raising dairy cows to raising dairy or other goats. This matters to many. As the new CCAFS policy brief reports: ‘In South Asia and sub-Saharan Africa, for example, nearly one billion people living on less than two dollars per day keep livestock; two-thirds of those are women. Fisheries and aquaculture support an additional half-billion people around the world. There is no easy answer for adapting these sectors to changing climates.

But the benefits to people from eating fish and animal protein—as well as raising livestock for their livelihoods—will not evaporate as the planet warms; answers must be found in securing their continued availability.’

While the news seems grim, adaptation is possible. Recent CCAFS research in Africa found that farmers are already adapting to climate change. Some 34% of the farmers interviewed in Africa, for example, have reduced their livestock herd sizes and 48% are managing their feed resources better. The better livestock diets also lower livestock methane emissions per kilogram of milk or meat produced. On the other hand, only 25% of the farmers interviewed have begun using manure or compost to improve their soils and only 10% have begun to manage or store agricultural water.

For more information, visits the CCAFS blog page on Recalibrating food production in a changing climate—What do we know and what can be done?

Read a new policy brief by CCAFS that outlines the challenges required in feeding the estimated 9–10 billion people who will live in this world by 2050. In the brief, the need for a complete recalibration of what crops we grow and animals we raise around the world is detailed, as climate change will bring challenges in weather, water use, and increased pests and diseases of crops and animals alike.

The policy brief is based on a new CCAFS working paper. Read the paper by Philip Thornton and Laura Cramer (eds.). 2012. Impacts of climate change on the agricultural and aquatic systems and natural resources within the CGIAR’s mandate. CCAFS Working Paper 23. Copenhagen, Denmark: CGIAR Research Program on Climate Change, Agriculture and Food Security.

This report was co-edited by ILRI scientist Phil Thornton, who is a scientist at the International Livestock Research Institute (ILRI) who also coordinates one of CCAFS’ research groups. CCAFS is a global partnership launched in 2011 between the research centres of CGIAR and the Earth System Science Partnership. CCAFS facilitates and integrates thematic work across multiple CGIAR Centres and other global, regional and local partners. Its key target groups are resource-poor agricultural producers, and rural and urban consumers of food, in low-income and middle-income countries in the tropics and sub-tropics.

Philip Thornton explains about CCAFS: ‘There are many other examples of the way in which CCAFS is working across disciplines and mandates, and across temporal and spatial scales. These include linking to modelling communities from different fields such as crop modelling and global integrated assessment modelling, and partnering with organisations with skills in the development and provision of downscaled models, decision-tools and datasets that provide the necessary granularity for national and sub-national planning. As well as linking across scientific disciplines, CCAFS recognizes the need to span boundaries across research and policy domains. To link knowledge and action entails involvement of policy-makers in all stages of the research cycle, and an understanding of policy as dynamic and polycentric across the public, private and civil society sectors.’

Read of interviews of Phil Thornton in the following media this week:

The Guardian’s Global Development Blog: When the chips are down: potato, maize and rice crop yields set to fall—Farmers in developing world will have to grow different food to prevent world going hungry in changing climate, says report, 31 Oct 2012.