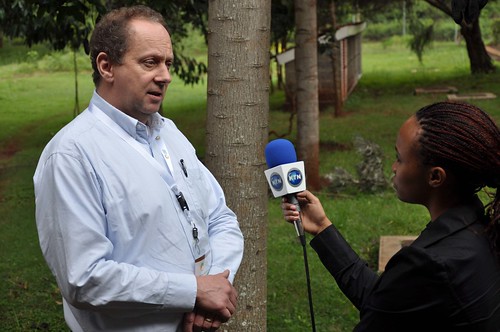 A newscaster from Kenya Television Network Local interviews Philip Thornton on the impacts of climate change on the African continent (photo credit: ILRI).

A new publication, Agriculture-Climate Letters, published by the Climate Change, Agriculture and Food Security program, this week highlight a paper published on the impacts of a 4ºC warmer world on African agriculture and food security. The lead author of the paper is Philip Thornton, an agricultural systems analyst with the International Livestock Research Institute (ILRI).

‘. . . The UK Met Office says a 4 degree [warmer] world is quite possible, and will plausibly be reached by 2070 or even 2060–in our children’s lifetimes. This will mean average temperature rises of a massive 15ºC in the Arctic, and 3-8ºC in the world’s most populated areas.

‘. . . Agriculture is highly sensitive even to a 2 degree scenario; a 4 degree world is beyond the bounds of both local and global knowledge, both modern and historical experience. . . .

‘A new paper, Agriculture and food systems in sub-Saharan Africa in a four-plus degree world, by Philip Thornton, Peter Jones, Polly Ericksen and Andrew Challinor, foresees profound effects. . . . [E]nsembles of models suggest average yield drops of 19% for maize and 47% for beans, and much more frequent crop failures. . . . Africa-wide, a massive 1.2 million km2 may be forced to flip from typical mixed farms, with both crops and livestock, into pure rangeland. . . .

‘Thus a 4 degree world calls for adaptive capacity in agriculture that is not just about increasing the resilience of current systems, but about completely new ways of farming and consuming. . . . Thornton and colleagues highlight four areas for immediate policy attention:

‘. . . Rapidly urbanising populations will need to eat nationally and regionally grown food. If +4 degrees signals the end to half a millennium of Africans eating maize, will the 21st century usher in a new era of indigenous urban foods, be they free-range hamburgers or drought-resistant yamburgers?

Subscribe to receive the monthly science-policy bulletin AgClim Letters in your inbox.

Read the science paper by Philip Thornton et al. in the British journal Philosophical Transactions of the Royal [Society] Series A: Agriculture and food systems in sub-Saharan Africa in a four-plus degree world, 29 November 2010.