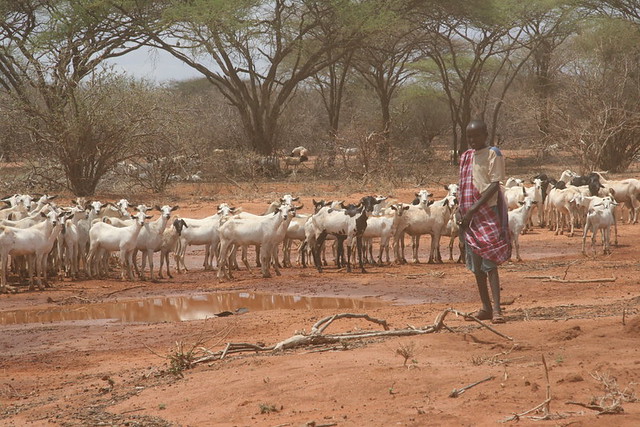 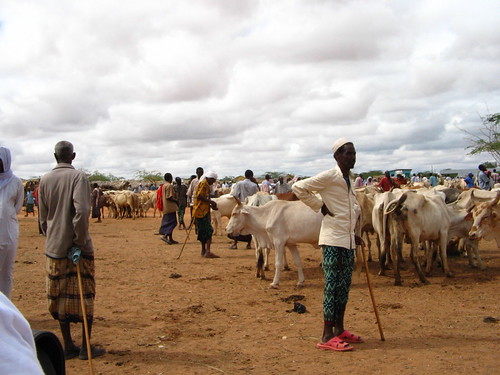 Livestock market in Garissa, in northeastern Kenya. Closure of the cattle market and disruption of cross-border cattle trade with Somalia due to outbreaks of livestock disease can worsen food insecurity among the pastoralists and agropastoralists on both sides of the border. (Photo credit: Tze-Yun Soh)

Rift Valley fever is a mosquito-transmitted zoonotic disease that harms both human health and livestock production. It can also induce large, often overlooked, economic losses among many other stakeholders in the livestock marketing chain.

A new paper published by ILRI scientists Karl Rich and Francis Wanyoike assesses and quantifies the multi-dimensional socio-economic impacts of a 2007 outbreak of Rift Valley fever in Kenya. The study is based on a rapid assessment of livestock value chains in the northeast part of the country and a national macroeconomic analysis. As would be expected, the study results show losses among producers in food security and incomes. But the researchers also found significant losses occurred among other downstream actors in the value chain, including livestock traders, slaughterhouses, casual labourers, and butchers, as well as among those in non-agricultural sectors. To better inform policy and decision making during animal health emergencies, the authors argue that we should widen our focus to include analyses that address the multitude of economic losses resulting from an animal disease.

‘Rift Valley fever has had significant impacts on human and animal health alike in East Africa and the Middle East. Past outbreaks in South Africa (1951), Egypt (1977/78), Kenya (1997), and Saudi Arabia (1998–2000) resulted in the cumulative loss of thousands of human lives. The 2000 outbreak in Saudi Arabia led to the imposition of trade bans of live animals from the Horn of Africa (Ethiopia, Somalia, and Kenya) that had devastating economic impacts: one study estimated that total economic value-added in the Somali region of Ethiopia fell by US$132 million because of these trade bans, a 42% reduction compared with normal years . . . .

‘In 2007, Rift Valley fever returned to East Africa, impacting both Kenya and Tanzania. Specifically hard hit by this latest outbreak were the pastoral communities of the northeastern part of Kenya. In this region, livestock serve an important livelihood function for pastoralists, with livestock trade representing over 90% of pastoral incomes . . . . Moreover, northeastern Kenya has the highest incidence of poverty within Kenya, with poverty rates of approximately 70% in 2004 . . . .

‘An overlooked component in the socio-economic analysis of animal diseases is the multiplicity of stakeholders that are affected. Rift Valley fever does not just affect producers, but also impacts a host of other service providers within the livestock supply chain and other parts of the larger economy. Cumulatively, these downstream impacts can often dwarf the impacts of the disease at the farm level, but public policy tends to concentrate primarily on losses accruing to producers. The failure to capture these diverse impacts may have important implications on the evolution and control of disease that may accentuate its impact.

‘The 2007 Rift Valley fever outbreak in Kenya had wide-ranging impacts on the livestock sector and other segments of the economy that are often overlooked in the analysis of animal disease. These impacts included production impacts, employment losses (particularly for casual labor), and a reduction in operating capital among slaughterhouses and butchers that slowed the recovery of the livestock sector once the disease had abated. On a macroeconomic basis, we estimated that Rift Valley fever induced losses of over Ksh 2.1 billion (US$32 million) on the Kenyan economy, based on its negative impacts on agriculture and other sectors (transport, services, etc.) alike.’

Read more: An Assessment of the Regional and National Socio-Economic Impacts of the 2007 Rift Valley Fever Outbreak in Kenya, by Karl Rich and Francis Wanyoike. Rich is on joint appointment with ILRI and the Norwegian Institute of International Affairs, in Oslo. ILRI researcher Wanyoike is based in Nairobi. Their paper is published in the American Journal of Tropical Medicine and Hygiene, 83(Suppl 2), 2010, pp. 52–57.