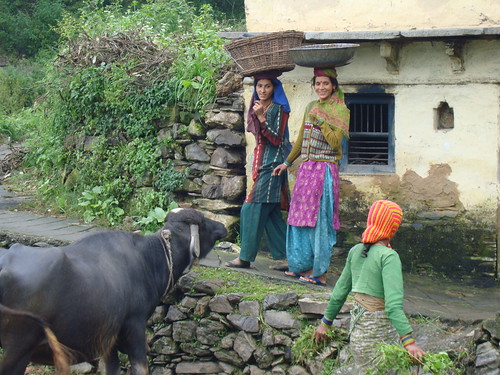 Women at work in India. Empowering women to own livestock and giving them rights to manage incomes can reduce poverty and hunger and improve family welfare (Photo credit: ILRI/MacMillan)

Throughout the developing world, women tend, feed, raise and care for farm animals without, usually, owing the stock, having a say in the business aspects of livestock production, or having rights to the household income it generates. Redressing these gender inequities would improve family welfare and reduce poverty and hunger levels in these countries, say the authors of a new book, The role of livestock in developing communities: Enhancing multifunctionality, co-published by the University of the Free State South Africa, the Technical Centre for Agricultural and Rural Cooperation (CTA) and the International Livestock Research Institute (ILRI).

One of the authors, Anne Waters-Bayer, was a speaker this week at a ‘Workshop on Gender and Market Oriented Agriculture (AgriGender2011): From Research to Practice’ that ILRI hosted on its campus in Addis Ababa, Ethiopia. At the Workshop, Waters-Bayer described ways to promote gender equality and to empower women through livestock development.

Poverty often has a ‘woman’s face’ and livestock researchers have long known that livestock provide women with a rare pathway out of poverty. Even though it is women who are largely responsible for managing animals, especially small stock, in developing-country communities, their role in livestock production and marketing has long been underestimated, even in livestock projects that aim to improve the welfare of women and their families.

Waters-Bayer, who formerly worked as a socio-economist with ILRI and is now with ETC EcoCulture, in the Netherlands, and Brigid Letty, from the Institute of Natural Resources in South Africa, say women continue to be overlooked in many livestock-related interventions ‘despite the many efforts of gender sensitization’ to include gender in agricultural research and development organizations. They say ‘there is still a strong tendency for project planners and implementers to assume that the major actors in livestock production are men, particularly where large ruminants are involved.’

With recent focus on the role of women in livestock development through initiatives such as an international ‘Challenge Dialogue’ that ILRI convened in 2008, there has emerged a new focus on the important role livestock systems play in enabling women to empower themselves. Small-scale livestock enterprises offer opportunities for women not only to increase household income but also to control larger portions of it, which reduces gender inequality.

Changing economic circumstances in many countries are leading more women to take on responsibilities for types of livestock that were traditionally the realm of men, such as cattle in southern Africa. These changes, as well as women’s access to livestock services and markets, should be considered.

To promote gender equality and women’s empowerment through livestock, successful projects, the authors say, should consider lessons drawn from ‘studies of gender roles and relations in livestock-keeping households and communities learnt over the past several decades in research and development related to livestock keeping.’ These lessons include the value of conducting a gender analysis before implementing an initiative. Another lesson has been that focusing on women is more effective in building women’s capacity than just focusing on integrating women into project activities.

Focusing on women starts with focusing on the livestock they keep. The book notes that the most promising interventions for women in resource-poor households appear to be small-scale, low-external-input, income-generating activities involving goats, dairy cows, poultry and other small-scale livestock such as guinea pigs, bees and silkworms.

Strengthening local women’s organizations and improving women’s and girl’s access to education and training is equally important, especially where these are geared to managing livestock-keeping programs. ‘Reducing poverty for the woman,’ the authors say, ‘means not only increasing women’s economic assets but also increasing their capacity and power to act and to change the rules that govern control of resources and to increase both women’s and men’s ability to question established systems to gain greater say in societal decisions beyond just the home and local community.’

Successful livestock projects, such as those run by Heifer International’s Women in Livestock Development initiative, Farm-Africa in southern and eastern Africa and the National Dairy Development Board of India, suggest that the impacts of livestock interventions on women should be measured not only by any changes in women’s economic status, but also by changes in the amount of work the women do compared to the benefits they get from that work, and by changes in how much the women are involved in decision-making.

Download The role of livestock in developing communities: Enhancing multifunctionality