A South-South Symposium to Improve Safety and Distribution in the Dairy Sector
1 â€“ 4 December 2009, Nairobi, Kenya 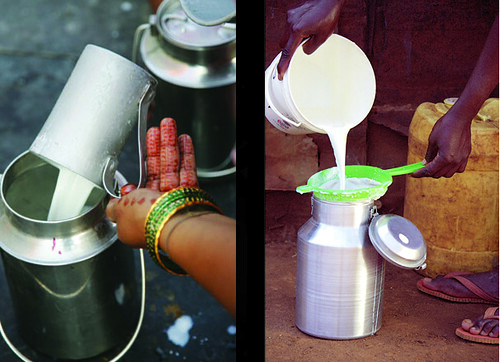 In both India and East Africa some 80-90% of milk is handled by the informal, un-organized dairy sector. We usually associate milk with cattle, but domesticated ungulates such as sheep, goats, yaks, water buffalo, horses, and camels are other primary milk producers in developing countries. The largest producer and consumer of cattle’s milk in the world is India.

Milk provides the primary source of nutrition for young mammals before they are able to digest other types of food, and carries the mother’s antibodies to the baby. It can reduce the risk of many diseases in the baby. The exact components of raw milk varies by species, but it contains significant amounts of saturated fat, protein and calcium as well as vitamin C.

The food value of an animal killed for meat can be matched by perhaps one year’s worth of milk from the same animal, which will keep producing milkâ€”in convenient daily portionsâ€”for years.

Despite the importance of this simple, opaque liquid, there has been little education in the handling of such an important nutritional substance nor to the organization of its distribution.

In Kenya, which has the largest dairy herd in Africa, including South Africa, about 1.6 million rural smallholder households depend on dairy production for their main livelihood, and dairy is the largest agricultural subsector by contribution to GDP, larger than horticulture, tea or coffee. Again, the large majority of these producers depend on the informal sector market, which employs over 30,000 people along the supply chain. Despite their immense contribution to livelihoods, informal milk marketing systems have historically suffered neglect and opposition from decision-makers and development agents, often because of concerns over quality and safety.

In East Africa, key players have been meeting regularly over the last three years to share lessons on these issues under an association formed to facilitate exchange of new approaches and to harmonize policies, the East Africa Dairy Regulators Association Council (EADRAC). With the nascent development of awareness in India of possibilities for upgrading informal markets, an event to allow the sharing of lessons with key players in East Africa engaged in similar milk marketing systems would be of immense benefit to both sides and the researchers involved.

To this end, a symposium is proposed that would bring together the key researchers and decision-makers from East Africa and northeast India concerning the informal dairy sector. Key outputs will be shared experiences and demonstrations of innovation through structured field visits and presentations of approaches and evidence. This will support the dissemination of new approaches for managing the informal sector that will improve the livelihoods of millions working in the informal dairy sectors of both regions, as well as consumers of milk and dairy products.

Case studies on these topics will be presented and specific strategies and recommendations developed. Participants will be dairy decision-makers and researchers from India and East Africa. The symposium will be linked to a regional EADRAC meeting to be held in East Africa and is provisionally planned for 1 â€“ 4 Dec 2009 in Nairobi, Kenya. The symposium is being organized by the International Livestock Research Institute and the Association (ILRI) for Strengthening Agricultural Research in Eastern and Central Africa.