The workshop is being convened by the International Livestock Research Institute (ILRI) on behalf of a project of the Ethiopian Government implemented by ILRI called ‘Improving Productivity and Market Success of Ethiopian Farmers’ (IPMS). It is being held at ILRI’s principal, Ethiopian, campus.

The workshop organizers hope to identify the most useful products of gender research for the commercialization of smallholder agriculture—and to get these into wider practice.

Most development experts agree that gender is arguably the biggest ‘missing link’ holding back agricultural development in poor countries. But as Madeleine Bunting argued recently in the Guardian’s Poverty Matters blog:

‘It’s odd. There is now a powerful consensus about the central role of women in development. They are the key agents of change given their impact on the health and education of the next generation. Everyone is agreed that women’s empowerment is vital, and it crops up in countless speeches by politicians all over the world. And yet change is achingly slow—embarrassingly so. . . . Women’s rights are in danger of becoming a wordfest.’

The participants at this week’s workshop in Addis Ababa are aware of the danger of saying too much and doing too little. The workshop participants include scientists, development experts, donor representatives and policymakers already working in Africa and other regions to give women greater access to markets and agricultural ‘value chains’.

They will present and discuss research-based evidence on promising strategies for addressing this missing link and hope to begin work to develop a new paradigm for market-oriented research and funding that directly serves women’s interests.

The workshop will draw heavily on experiences of the IPMS project, which started six years ago with funding from the Canadian International Development Agency.

IPMS published a full report of its gender research in a working paper that appeared in December 2010, ‘Opportunities for promoting gender equality in rural Ethiopia through the commercialization of agriculture’, and yesterday released a 13-page brief for the general public, ‘Empowering women through value chain development’, that highlights findings and lessons the project learned, and the good practices it supported, in its four years of implementing projects in ten pilot learning woredas (districts) in four regions of the country. In this work, an IPMS gender research team set out to ‘mainstream’ best gender practices, specifically by increasing access by rural Ethiopian women to market-oriented agricultural resources, technologies and knowledge.

The IPMS gender working paper adds significantly to the literature available on women and agricultural development, which despite demonstrable need, remains thin. Few studies have ever been conducted on women’s role in Ethiopian agriculture, for example. This is despite the fact that 85% of Ethiopian women live in rural areas where virtually all households are engaged in small-scale farming of one kind or another, and despite the fact that most Ethiopian women continue to have far fewer opportunities than men for personal growth, education and employment.

The unequal power relations in Ethiopia, as elsewhere, are maintained by policies, programs and information systems that reman directed primarily at men. A recent paper published by Agnes Quisumbing and Lauren Pandolfelli, researchers at the International Food Policy Research Institute (IFPRI), demonstrates how dysfunctional it is to ignore or marginalize women in development interventions: reviewing 271 World Bank projects, the authors found that by addressing the needs of both men and women, projects increased by 16% the long-lasting value of the benefits the projects generated.

Across four major regions and ten pilot learning communities, the IPMS gender researchers worked with Ethiopian research and development officers to strengthen women’s leadership and negotiating skills not only in farmer groups and local associations but also in their own households. The specific aim was to increase the women’s participation in market-oriented agricultural production. The project and government staff encouraged women to organize themselves into producer groups for various agricultural commodities and into marketing groups that could collectively demand and get higher market prices than individuals could get.

Women throughout the developing world suffer from unequal access to agricultural training and other resources, despite recent World Bank estimates that they carry out 40–60% of all agricultural labour in the world. The lead author of the IPMS working paper, Ethiopian scientist Lemlem Aregu, says: ‘Having only second-hand information passed on by their husbands and other men greatly reduces women’s ability to innovate and fulfil their productive potential. And this, of course, holds back commercial agriculture in these countries.’

Ranjitha Puskur, an Indian scientist who has led a gender research team in the IPMS project and now leads an Innovations and Livestock Systems project in ILRI’s Markets Theme, says that one way to start to change this situation is to scale up women’s work in agricultural commodities that have traditionally been the province of women.

‘Women posses animal-raising skills honed by years of living in rural areas,’ Puskur says. ‘A good entry point for helping them to better market those skills is to focus on poultry raising and other agricultural work that is often left to women to oversee. These enterprises then become sources of self-reliance, providing women with the means of generating a daily small income, with which they can meet their household expenses. With this experience, women are encouraged to move further up the ‘livestock ladder’ and to begin participating in other, traditionally male-dominated, kinds of livestock production.’

Follow discussions at this workshop on this main ILRI News Blog, on ILRI’s Gender and Agriculture Blog, or by searching for ‘AgriGender2011’ on social media websites such as Twitter (quotable quotes), Facebook (blog posts), SlideShare (slide presentations), Flickr (conference and other photographs) and Blip.tv (filmed interviews).

Read more of what Madeleine Bunting has to say on the Guardian’s Poverty Matters Blog: Women’s rights are in danger of becoming a wordfest, 27 January 2011. 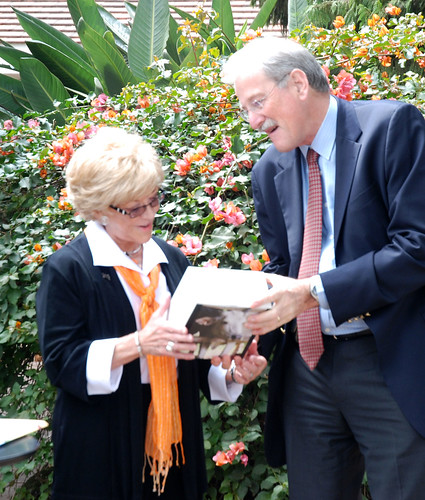 As food riots continue in Mozambique and food crises persist in Niger and elsewhere, leaders in global agriculture, food and development are gathering in Des Moines, Iowa this week to highlight the significant role the world’s smallholder farmers could play in alleviating poverty and hunger.

In sub-Saharan Africa and south Asia, most people still live in rural areas, where they farm crops and livestock or derive other livelihoods from agriculture. With few other ways to feed their families or make a living, billions of rural people will continue to cultivate lands and raise farm animals.

These smallholder farmers form the backbone of global food production. Despite climate change, pests, diseases, water scarcity, and myriad other challenges, small family farms produce more than half of the world’s food. Most of the food staples consumed in the developing world come from small ‘mixed’ farms, which make efficient use of the resources at their disposal by combining crop and animal production.

Smallholders also represent an emerging market opportunity for local and international agribusiness alike. Because opportunity costs for their land and labour are relatively low, these farmers are competitive food producers. Their mixed crop-and-livestock farming systems can compete effectively against large scale commercial operations.

Smart investments by agribusiness could help millions of these smallholders in south Asia and Africa. By helping them to become even more efficient and improving their links to other markets, agribusiness could enable them to make the transition from subsistence farming to remunerative enterprise.

Agribusiness can help farmers gain better access to improved seeds, knowledge, and other agricultural inputs, and link smallholders to local and international private sector enterprises, reducing transaction costs and risks as well as adding value to their agricultural products. Farmers would see a sustainable boost in production and income, while agribusinesses would gain new access to billions of potential buyers.

The award of the World Food Prize this week to Heifer International, a livestock oriented non-governmental organisation, should help promote smallholder livestock production, in particular, as a vital pathway out of poverty and hunger.

Farm animals kept on the world’s small farms serve as the building blocks of prosperity. With global human population rising (it is expected to increase by 2 to 3 billion people over the next four decades, after which it should begin to decline), livestock are becoming agriculture’s most economically important sub sector, with demand in developing countries for milk, meat and eggs projected to double over the next 20 years alone.

Small scale livestock enterprises drive dairy production in eastern Africa and south Asia. India is now the largest dairy producer in the world, with most of the country’s milk produced by small farmers. More than 80% of the milk output in Kenya is produced not by large milk companies, but rather by approximately 800,000 small scale dairy farmers. It is sold to customers by some 350,000 small scale milk vendors.

The potential of livestock and the ongoing ‘livestock revolution’ to better the lives of poor farmers in developing countries drives the scientific agenda of the Africa-based International Livestock Research Institute (ILRI). We see the great opportunities livestock offer the poor. Every day, we see how much difference the meat, milk, muscle, manure and money supplied by a cow, goat, pig, camel or other domesticated animal makes to people struggling to produce enough food and income for their families. We see also how much the loss of farm animals – through disease, drought or other disaster – devastates such households.

With the help of agribusiness expertise and increased public investment, we think the world’s smallholder farmers could become a major force in global food security, helping to sustain increasing levels of world food production over the long term.