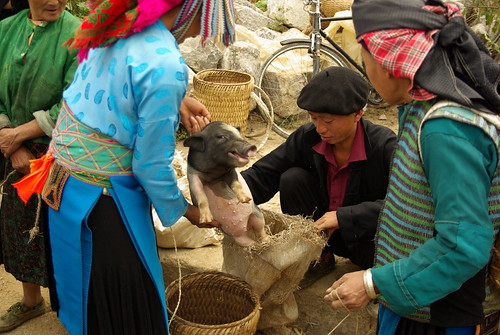 Pigs for sale at a market in Viet Nam (photo credit: Simone Retif).

In Viet Nam, small pig farmers raising 10 or fewer animals near their village households can remain competitive with larger pig producers if they continue to exploit their advantages over larger farmers. These advantages include their low labour costs and their ability to supply buyers with freshly slaughtered meat, a form most Vietnamese continue to prefer to the chilled or frozen meat from bigger piggeries.

ACIAR's representative in Viet Nam, Geoff Morris, speaking at a final workshop of the project held in Hanoi on 5 October 2010, said that smallholder pig producers, who supply about 80 per cent of the pork marketed in Viet Nam, play a big role in the nation's economy. The research project identified policies that would help Viet Nam's many small pig farmers to raise their incomes and remain competitive in the face of growing imports of pork and official support for larger piggeries.

Another advantage small producers have over large ones is that the former spend less on feed for their animals. Lucy Lapar, an economist with ILRI, said that while feed accounts for two-thirds of the costs of raising pigs at small piggeries, this was much lower than at bigger farms because small operators tend to feed their pigs by-products from their own crops and to let their pigs forage. Bigger operators must buy relatively expensive, industrially processed, feed.

Household-based pig production generates gross margins ranging from 4,000–15,000 Vietnamese dong (US$0.21–0.78 based on current exchange rates) per kilogram liveweight of pig produced. These are good indicators of returns to household labour and comparable to the current daily minimum wage of about 22,000 VND ($1.15). Among those employed in small-scale pig production are women and many others who would otherwise remain jobless.

Conducting a consumer survey of 1,650 households to investigate the demand for pork, the researchers found that it accounts for 40 per cent of household expenditure on meat and that fresh pork remains preferable to chilled or processed meat.

'The good news is that smallholder pig producers are highly competitive in producing fresh pork,' said Lapar. The bad news, she says, is that, compared to large-scale pig producers, most small producers in the country have to deal with poor genetic stock, low-quality feed, animal illnesses, and insufficient market information and policy support.

Pham Van Duy, from the Agriculture and Rural Development Ministry's Livestock Department, said that it is likely to become increasingly difficult for the nation's four million pig-raising households to continue to meet the growing demand for pork in terms of both increasing their quantity and quality, both of which are being demanded by the country's consumers. According to Viet Nam's General Statistics Office, the country's pork sales have steadily increased, from 1.5 million tonnes in 2001 to 2.9 million in 2009, with 27.6 million pigs now being raised in the country.

This smallholder pig research project, 'Improving the competitiveness of pig producers in an adjusting Vietnam market', was carried out in Ha Noi, Ho Chi Minh City and six of Viet Nam's provinces from 2007 to 2010. Partners in the project include the Centre for Agricultural Policy – Institute of Policy and Strategy for Agricultural and Rural Development, the International Food Policy Research Institute, Oxfam and the University of Queensland.

Demand for pork by Vietnamese consumers: Implications for pro-poor livestock policy and development agenda in Vietnam

The growing shortfall in Vietnam’s domestic supply of pork: Significance and policy implications

The pork value chain in Vietnam: Emerging trends and implications for smallholder competitiveness and chain efficiency